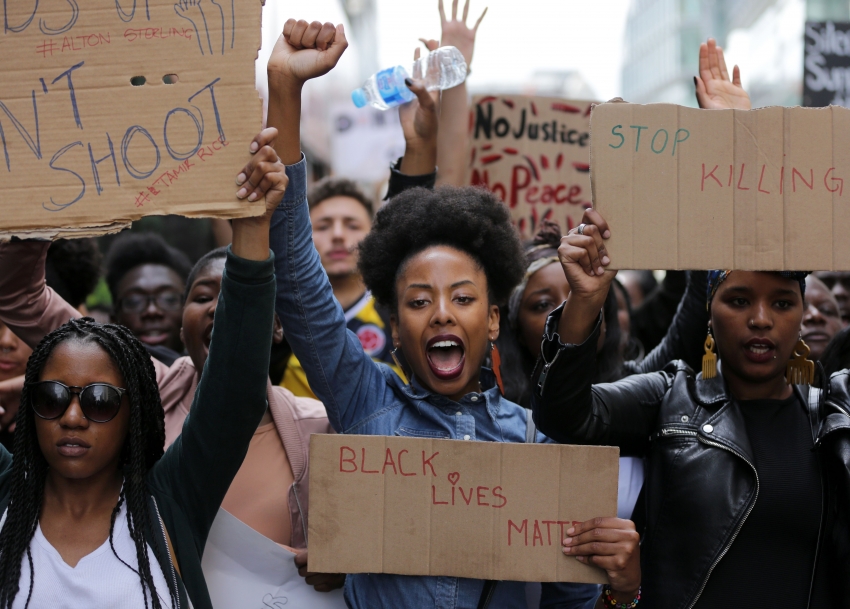 Reclaiming “Send Her Back”: A Call for Black Americans to Voyage to Africa

We need to embrace our legacy as the richest, most generative and creative beings on this earth.

The concept of “Black love” or “Black hair” or Black anything holds no resonance with locals because it would be redundant. My Blackness was at ease on the continent.

When it comes to being Black, queer and immigrant in America, there is no safety. The countless violent attacks on people of color, the lack of action against guns after repeated mass shootings and the unrelenting excuses for assailants who are predominantly white and male point to a sinister truth about America: Violence and murder founded this nation and remain deeply entrenched in the state ideology. The president has reinforced this ideology by inciting anti-Black and anti-immigrant sentiment through the call for ICE raids and a border wall and shouts for American-born, non-white government officials to go back to their countries.

While the president’s comment was undoubtedly meant as an insulting erasure of the foundational legacy and heritage of Indigenous, Black and Latinx people in America, the recent mass shootings have convinced me that some of us should return to our origin country—but not for the reason Trump suggests. As a Black American, I had no idea what traveling to the motherland would mean for my life. Now that I’ve gone, it is my sincerest belief that we as people of the diaspora in America owe it to ourselves to travel to Africa, to touch the land where our people were ripped from the shore, to experience what it’s like to live in a place where Blackness is celebrated, without fear and racism.

When I became a mother in America, my sense of fear was heightened because I was now living from the lens of a Black woman with a sensitive and wildly curious Black son. I remember watching the case of Trayvon Martin closely; my son Akeim was only 10 months old the day George Zimmerman was acquitted for Trayvon’s death, and it broke me down into a haze of heartache and rage. At the time, I was in the first months of building BYP100, a political organization for young Black people dedicated to fighting for the liberation of all Black people, with several of my comrades including Charlene Carruthers, Rose Afriyie, Malcolm London and Jasson Perez. Even while grieving, we knew that centering ourselves in joy was the medicine for the evil that trailed us throughout our American experience. We decided our first event would be a celebration of life for Trayvon at our headquarters on the south side of Chicago. Such events were the balm for the moments of anguish brought on with each shooting of an unarmed Black woman, child, trans person and man. We understood our joy was a major tool in resisting despair and continuing the fight to live freely.

Out of this understanding, BYP100 member Jonathan Lykes founded the Black Joy Experience Ensemble, a cultural production and performance group utilizing old tools of movement, such as chants and songs, to politicize and honor our spirit as resilient and creative people of the sun. As members of the Ensemble, Jonathan and I were invited to join an international delegation to Ghana where we would attend their annual Pan-African festival PANAFEST during the historic Year of Return, a decree made by the Ghanian government to commemorate the 400 years since the first documented African was brought to Jamestown, Va. as a slave. I spent two weeks building relationships with youth, elders, government officials, activists and artists, sharing collective stories about our experience as Black people and what it means to have Black joy across the diaspora.

The welcoming I felt in Ghana was like nothing I’d ever experienced in my twenty-something years as a Black American. For two nights I was hosted in Lomé, Togo, by a dear friend Dossé-Via Trenou-Wells, founder of Magic and Melanin, and one night we had an intergenerational and multilingual conversation with Black people from America, Togo, Ghana, Senegal, France and London, on how we experience joy to combat oppression. We talked about the importance of being in a warm climate, the presence of music in the streets, the pleasure of a stranger smiling and saying hello to you and the familiar energy we immediately felt upon meeting each other. In thinking about how to strengthen our bond as people of the diaspora, there were some critical realizations around our forced separation. I was amazed that many of my continental African kin were not made aware of the enslavement of African Americans. And likewise, I hold a surface-level knowledge of the colonization of the different African nations. As we talked and ate and translated across Ewe, French, Mina and English, our bond as a group grew closer. One brother from Togo said it was his first time being a room where a group was talking about Blackness and it made him feel thirsty for more. I believe this kind of happening was able to take place because we had the luxury of being together unhindered by violence and overt racism by white people.

Days before I returned home from Ghana, a sister of mine back in Chicago sent me a report of two mothers from the anti-violence group MASK killed in a drive-by shooting while monitoring their community. The news jolted me out my serene time in Ghana and drew me back home to Chicago and my concern for my son and daughter. As I called my children’s fathers, all I could think about was getting me and my babies somewhere, anywhere safe to live. On the last day of the trip, my fellow comrade announced to our group that there had been a mass shooting in El Paso, Texas, with 22 people murdered and 26 others injured, some of whom wouldn’t go to the hospital out of fear because they are undocumented. Before I could process El Paso, we got word of yet another mass shooting with nine more murdered and 27 injured in Dayton, Ohio, not far from my hometown of Cleveland, where 12-year-old Tamir Rice was murdered in 2014.

The news of these recent shootings provoked a deep anxiety in me, mainly because I was not surprised at all to hear it. I am still reeling from the deaths of the The Charleston 9 and those killed and harmed at Pulse nightclub. But it’s deeply unsettling to realize that in the past 10 years I have grown wary but accustomed to the targeted murder of people of color and Black people by police and vigilantes with white supremacist agendas.

I was not eager to return to America. In Ghana, I noticed a striking difference as I was walking around Osu or Cape Coast: Everywhere I went, I had no fear of being harassed or suffering from the demoralizing effects of constant microaggressions, because I was a part of the majority. The concept of “Black love” or “Black hair” or Black anything holds no resonance with locals because it would be redundant. My Blackness was at ease on the continent. I felt safe in a way I didn’t know existed, and now I know this is how I am supposed to feel all the time.

After hearing about the shootings, I went to social media to see the same discourse I knew too well: We should send thoughts and prayers, the shooters are mentally unstable and were apprehended without incident. I saw another post about a Black man who was pistol whipped around the same time without any mainstream media attention. When the singer Ari Lennox went live on Instagram to express her anxiety around living in America, the fear of being in a movie theater or taking her nephew to daycare, it hit me again how blessed I’d been to shed this fear for my personal safety for a couple of weeks. I was struck by how Ari Lennox or my friend Jonathan or myself are otherwise full of joy and life but are constantly disrupted by the hatred of white supremacy.

In returning to the motherland I found so much opportunity to settle into a place of Black joy, and I’m encouraged by how rapidly this joy has been spreading into Black America as well. When Black Panther came out I remember all the viral videos of Black Americans adorned in kente and dashikis dancing as they left the theaters. I felt the same energy with the release of the live-action The Lion King and Beyoncé’s love letter to Africa with her production of the movie's soundtrack, The Gift. The celebrated performances of Burna Boy and Mr. Eazi at Coachella, Tobe Nwigwe, a first generation Nigerian-American repping Houston, are all examples of a widely increasing afro-fusion.

On both sides of the Atlantic, we are realizing we’re more familiar than we may have thought. And this cross-cultural exchange is not only possible but critical to our continued resistance to a global attack on Blackness.

I am not romanticizing a neat transition into a Pan-African world; it is extremely difficult for our continental relatives to get to the states and the cost of travel even for Black Americans with blue passport books can be prohibitive. However, with social media to connect us and a will to learn, we can begin to heal our distance from our kin. And there are organizations being created for the sole purpose of granting scholarships for people of the diaspora to return home. I invite all my Black people to learn about W.E.B. Du Bois’ sojourn to Ghana and his relationship to Ghana’s first prime minister, the great Kwame Nkrumah, and how Du Bois’ renounced his American citizenship to remain in Ghana. To take the time to learn some Twi and most importantly get in right relationship with the land we were stolen from and begin a process of healing our lost kinship.

So yes, we should all go back. Not because white supremacists don’t want us here but because of our own self-love and self-determination. We need to debunk the myth that our places of origin are third-world shitholes and reclaim our legacy as the richest, most generative and creative beings on this earth. We come from the bastion of the world’s natural resources and our collective melanin is just the vibranium we need to heal ourselves and continue the fight for Black people all over the world.

Johnaé Strong is an educator, organizer and writer who has been working at the intersection of social movements, healing and education for over a decade. Johnaé is a founding member and leader of BYP100, a political organization for Black people 18–35 working for liberation for all Black people. Her work has spanned across community and labor with a focus on campaigns against state violence and school privatization and amplifying community-led strategies for creating a more just and safe society. Johnaé holds a Bachelor of Arts in International Studies and Master's of Arts in Education from the University of Chicago. When she isn't writing, Johnaé can be found making music, losing dance battles to her two children: Akeim and Jari, or in her hometown of Cleveland, Ohio.