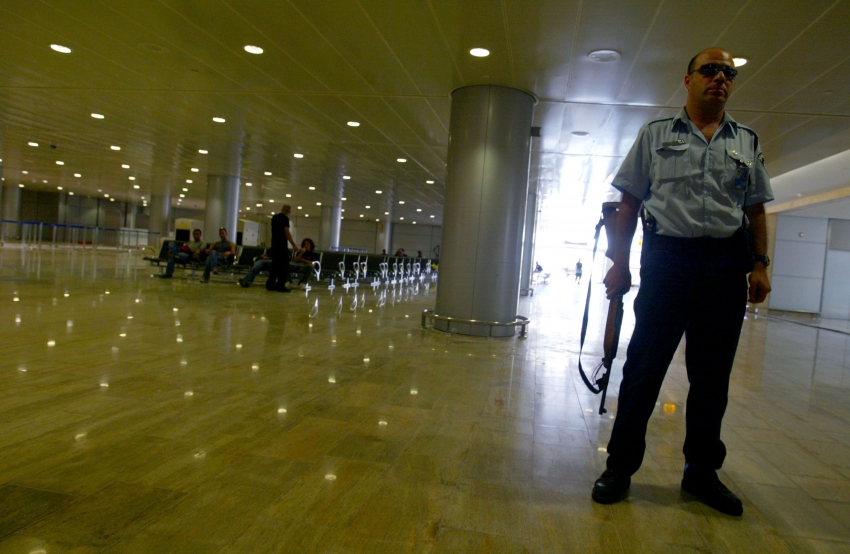 An Israeli police officer stands in the departures hall in a terminal under construction at the Ben Gurion International Airport on October 21, 2004. (Photo by Uriel Sinai/Getty Images)

I’m Palestinian. Like Rashida Tlaib, I Am Barred From Seeing My Family.

Rep. Tlaib’s experience is familiar to many Palestinians.

Rep. Tlaib’s ordeal last week demonstrates that no Palestinian can escape Israel’s racism—not even an elected member of U.S. Congress.

Israel’s treatment of U.S. Congresswoman Rashida Tlaib (D-Mich.) has made Israel’s complete control over Palestinian lives clear. Rep. Tlaib, a Palestinian-American with family in the occupied West Bank, was forced to make a choice between her right to visit her grandmother and her right to political speech against Israeli oppression. She ultimately chose the collective over the personal: She refused Israel’s demeaning conditions that would have granted her a “humanitarian” exception to enter Palestine, so long as she refrained from advocating for a boycott of Israel during her visit. Rep. Tlaib explained in a press conference in Minneapolis on August 19, “My grandmother said it beautifully when she said I am her dream manifested. I am her free bird, so why would I come back and be caged?”

Rep. Tlaib’s experience is familiar to many Palestinians, including myself. I, too, was barred from seeing my family in Palestine because of my advocacy for freedom and justice for Palestinians. In May 2012, I traveled to Ben Gurion airport in Tel Aviv to participate in an interfaith delegation and to attend my cousin’s wedding in Ramallah. I presented my U.S. passport to Israeli authorities. At least five Israeli interrogators asked for the names of my father and grandfather; the names likely sounded too “Arab” for the interrogators, who asked me numerous questions about where my father was born. I was taken aside and questioned at least five times.

At one point, an interrogator from Shin Bet turned his computer around and told me to log in to my email account. He threatened that if I didn’t comply, my employer would be contacted and would subsequently fire me. I was told that Israel and the U.S. have a close relationship and that I might not be allowed to go back home. After searching for information about me online, my interrogator asked me threateningly why I was “active.”

When I contacted the U.S. embassy to report my detention and ask for assistance, the embassy employee, whose official title I do not know, told me, “If you are not Jewish, there is nothing we can do to help you.” After eight hours, an Israeli woman I had never seen before verbally informed me that I was a threat to the security of Israel. I was taken to a detention center near the airport and kept in a cell overnight. The next day I was sent back to the United States.

Palestinians like myself have no access to our homeland except at Israel’s whim. Because of the state’s exclusionary policies, I have not seen my family in Palestine in over 10 years. A whole generation of my young cousins has grown up, gotten married and had children of their own. I only know them through photographs.

My own father, born and raised in the West Bank city of Ramallah, can only return to Palestine  as a “tourist” on his U.S. passport. Israel can deny his entry at any time. Millions of other Palestinians—whose parents and grandparents fled or were expelled from Palestine during the 1948 war—remain barred from returning home. They remain refugees. Meanwhile, any Jewish person anywhere, even those with no family connections in Israel, can travel to Ben Gurion airport and immediately acquire Israeli citizenship.

Israel’s exclusionary policies are not limited to keeping Palestinians out: They also deny return for thousands of Palestinians holding Israeli citizenship. Take the case of Salwa Copty, born in July 1948. Her family lived in the village of Ma’alul outside of Nazareth, but the village was occupied and destroyed by Israeli forces in 1948. Salwa and her family became refugees, internally displaced within the state of Israel.

Salwa’s father was killed by Israeli forces a few months before Salwa was born, and was buried near the village. That area is now the location of an Israeli military base. Since 2000, Salwa has repeatedly appealed to the Israeli authorities to allow her to visit her father’s grave inside the base. It was only after the intervention of the legal center Adalah that Salwa finally won her right to visit her father’s burial site just last week. (Full disclosure: I am the executive director of Adalah Justice Project. We are independent of Adalah the Legal Center, but we work closely to support its work.)

“Since 1948,” says Adalah’s general director Hassan Jabareen, “Israeli policy has been to prohibit Palestinian family unification, and to restrict Palestinians’ right to enter and leave their homeland freely. This policy has worked to fragment them, which has created a political disaster and a humanitarian crisis for the 12 million Palestinian people around the world.”

That policy applies as much to Rashida Tlaib and her living grandmother as it does to Salwa Copty and her deceased father. Indeed, Rep. Tlaib’s ordeal last week demonstrates that no Palestinian can escape Israel’s racism—not even an elected member of U.S. Congress.

This is what Israeli leaders mean when they call Israel a Jewish state. This racist ideology drives legislation like the Jewish Nation State Law, which declares that Jews alone have the right to self-determination in all land under Israeli control. Within this supremacist framework, Palestinians must be uprooted, disconnected and erased from the land and their identity as a people.

Despite the personal toll incurred, Israel’s latest blunder in banning Rep. Tlaib has elevated Palestinians' demands for their right of return into U.S. mainstream discourse and policy debates. Support is growing in the U.S. for Boycott, Divestment and Sanctions (BDS) against Israel to support Palestinian rights and self-determination. This growing support scares both Israeli and U.S. leaders who are committed to maintaining the status quo of Israel’s domination over Palestinians and further territorial expansion. In Israel, support for BDS is a civil offense, and international supporters of BDS can be barred from entry into the country under a law passed in 2017. Last month, the U.S. House overwhelmingly passed a resolution, H.R. 246, condemning BDS. Palestinians owe Rep. Tlaib gratitude for sticking to her political principles in order to bring the Palestinian collective struggle for return, freedom and equality into sharp focus.