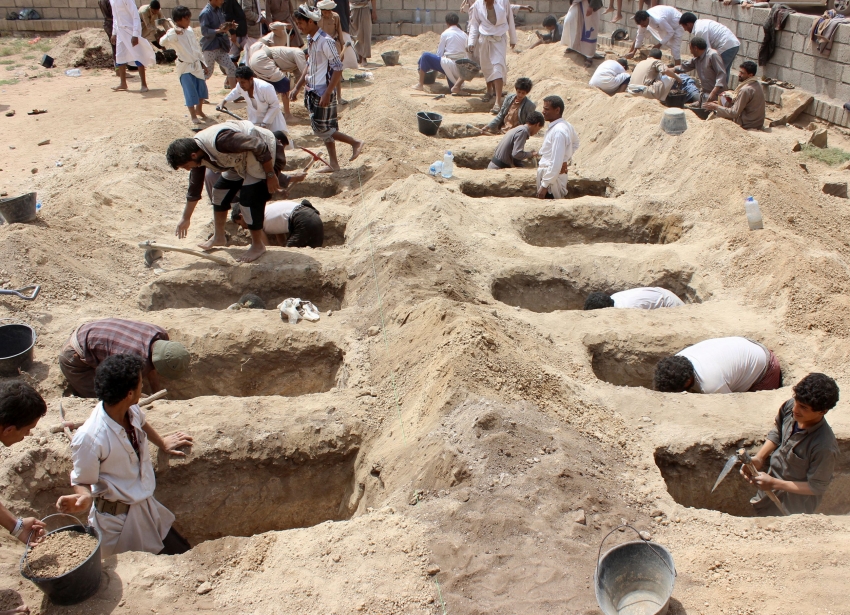 Yemenis dig graves for children, who where killed when their bus was hit during a Saudi-led coalition air strike, that targeted the Dahyan market the previous day in Saada on August 10, 2018. (Photo by STRINGER / AFP) (Photo credit should read STRINGER/AFP/Getty Images)

The U.S.-Backed Coalition Can’t Agree on Why It’s Bombing Yemen

As Saudi Arabia and the United Arab Emirates clash over their goals, the people of Yemen are paying the price.

Ultimately, the only path for Yemenis to achieve their goals—not those of their occupiers—is to reject foreign interference altogether and return to the negotiation table.

Since the onset of the joint Saudi­-UAE military intervention in Yemen, the U.S. has played a significant role in backing the coalition. This war has taken a brutal toll on the people of Yemen: According to one estimate, over 91,600 people have been killed in the violence since 2015 and at least 85,000 children under the age of five have died of hunger and preventable illnesses. The U.S.—under Obama and Trump—has continued to provide weapons and other forms of military support to the coalition.

In recent weeks, the already-devastating war in Yemen has taken a turn that has unleashed even more conflict in the war-torn country. Though characterized by foreign observers as a “proxy” war among regional powers, recent events in the former South Yemen highlight the ways in which historic divisions still shape current politics and will no doubt play a role in molding Yemen’s future. This conflict, in which UAE-backed separatist forces seized Aden from the Saudi-backed Hadi government, also serves to delegitimize U.S. participation in the Saudi-UAE intervention, which is now nearing 4.5 years.

Throughout the war, the Saudi-led coalition has emphasized its commitment to reinstating Yemen’s president Abd Rabbu Mansour Hadi to power. However, recent events show members of the alliance that is backed and aided militarily by the United States cannot even agree on the coalition’s goals in Yemen. Continued U.S. participation only serves to prolong an increasingly aimless intervention that, according to a recent United Nations report, may implicate the U.S. in war crimes. Especially in light of these developments, the moral travesty of the war in Yemen should be front and center of the Democratic debates on September 12.

To understand the importance of this conflict and its potential impact on the U.S.- Saudi intervention, an examination of Yemen’s recent history is important.

Before Yemen’s unity in 1990, parts of the country were ruled by different colonizers: The Ottomans ruled northern Yemen until the end of World War I, while the British Empire occupied Aden and southern Yemen from 1839 until 1967. Following the collapse of the Ottoman Empire, northern Yemen was ruled by the Mutawakkilite Kingdom until a coup backed by Egypt’s Gamal Abdel Nasser ended its rule in 1962 and formed the Yemen Arab Republic (or North Yemen). The British, meanwhile, left the south in 1967, after which the People’s Democratic Republic of Yemen (PDRY or South Yemen) was born and, shortly thereafter, transformed into a Marxist socialist republic.

Though the two countries were now free, colonizers left an indelible mark on each country’s culture. This included the outlook toward religion; while Zaidi-Shia and Shafi’i-Sunni sects played a prominent role in North Yemen, southern leaders (especially in Aden) worked to de-emphasize religion in daily life. Other differences were also apparent. For example, while literacy rates were low across both countries, they were higher in South Yemen by 1985. Also, while women enrolled in Sana’a University in 1989 to 1990 represented 14% of the student population, 41% of those enrolled in Aden University were women. Despite these and other political, religious, and social differences, as well as hostility that led to a North-South civil war in 1972 and the assassination of North Yemen’s president Al-Ghashmi by a PDRY peace envoy in 1978, unity was in the horizon.

Worsening economic conditions in South Yemen—partly brought about by a significant loss of economic aid from the faltering Soviet Union in the years prior—led PDRY leaders toward unity talks in 1988. The Republic of Yemen was formed in May 1990, with North Yemen’s Ali Abdullah Saleh as its president and South Yemen’s Ali Salim Al-Beidh as its vice president.

The unity, however, was short-lived. Though South Yemen was geographically larger than the North, its people only comprised 20% of the population—a demographic breakdown that is still in place today. With borders now open, many northern Yemenis began moving to the south, reinforcing southern fears of being outnumbered. And when Al-Beidh’s Yemeni Socialist Party won 56 of the 301 parliament seats in a 1993 election (18%), the fragile unity began to crumble.

On May 21, 1994, just one day shy of the fourth anniversary of the unification, southern leaders declared secession from the north. Saleh, an army veteran who rose through the ranks to become president of North Yemen in 1978, and president of a united Yemen in 1990, responded with war. After seizing a southern military base that allowed him access to the country’s oil fields, northern troops led by Yemen’s UN-recognized interim president (Abd Rabbu Mansour Hadi) succeeded in defeating the South’s insurgency.

By July, Ali Abdullah Saleh was fully in control of Yemen while Ali Salim Al-Beidh—along with many in his socialist party—was exiled. Later in 1994, as a reward for his services, Saleh appointed Hadi—a southerner by birth—the now-vacant vice presidency. Hadi would go on to serve as Saleh’s vice president until Saleh transferred power to him in late 2011 months after surviving an assassination attempt in June of that year.

By 2007, resentment over various forms of marginalization, as well as exploitation of southern resources by northern elites, led to the creation of al-Hirak al-Janoubi (“the southern movement”), which challenged Saleh and renewed calls for secession from the north. The Hirak, along with other political groups such as the Houthis, gained momentum when Yemenis peacefully marched against Saleh and his government in early 2011. Shortly before the Saudi-led intervention began in 2015, Hadi first fled to Aden and later to Saudi Arabia. With backing from the United Arab Emirates, a faction of Hirak organized itself into a separatist political group called the Southern Transitional Council (STC) in 2017.

By then, the Saudi-UAE coalition had been attempting to wrestle control of the former North Yemen from Saleh and the Houthis for two years, following their takeover of the former South Yemen months into the intervention. Though they occasionally clashed with Hadi forces, however, the STC did not make a major military move until the UAE began to hint at a shifting role in Yemen.

A coalition at war with itself?

In July, following announcements (and denials) of the UAE’s plan to pull back from the war in Yemen, the STC fighters launched an attack on Hadi government forces in Aden, capturing the city. Though they were previously tolerated by the Saudi-backed Hadi government, this takeover led to Hadi’s government-in-exile declaring the takeover a “coup” and refusing talks until the STC retreats.

The view that this is a proxy war between Saudi Arabia and the UAE, however, fails to recognize Yemenis’ own interests and separate them from the interests of those backing them. The latest events also further complicate the unconstitutional U.S. participation in the war.

Ostensibly, the U.S. supports the Saudi-UAE coalition’s 4.5-year-long attempt to reinstate Hadi to power. With one coalition member now openly supporting separatists who, like the Houthis, are in active rebellion against the Hadi government, Trump’s decision to remain in the coalition has little justification and dwindling legitimacy.

Ultimately, the only path for Yemenis to achieve their goals—not those of their occupiers—is to reject foreign interference altogether and return to the negotiation table. Though wounds run deep and the promise of unity may not be fulfilled, that decision should be made by the people of Yemen alone. Members of the coalition bombing and starving Yemen are fiercely protective over their own sovereignty (e.g. Saudi Arabia’s reaction to Canadian ‘meddling’ and the U.S. investigation of Trump’s ties to Russia). Yet they have trampled upon the sovereignty of Yemen through an intervention that transformed Yemen into the world’s worst humanitarian crisis.

The U.S. has failed to achieve its goals in Yemen and has broken its own laws in pursuit of its Persian Gulf allies’ imperialist interests. In the name of fighting Houthi rebels, Saudi Arabia and the UAE have been deliberately targeting civilians, using starvation as a weapon of war, and cooperating with al-Qaeda. Additionally, the UAE has been operating secret prisons and is now sabotaging its mission by backing separatist rebels and thereby unleashing more chaos in war-torn Yemen. For these reasons and more, is time for the United States to finally end its illegal, unconstitutional, illegitimate war on Yemen.