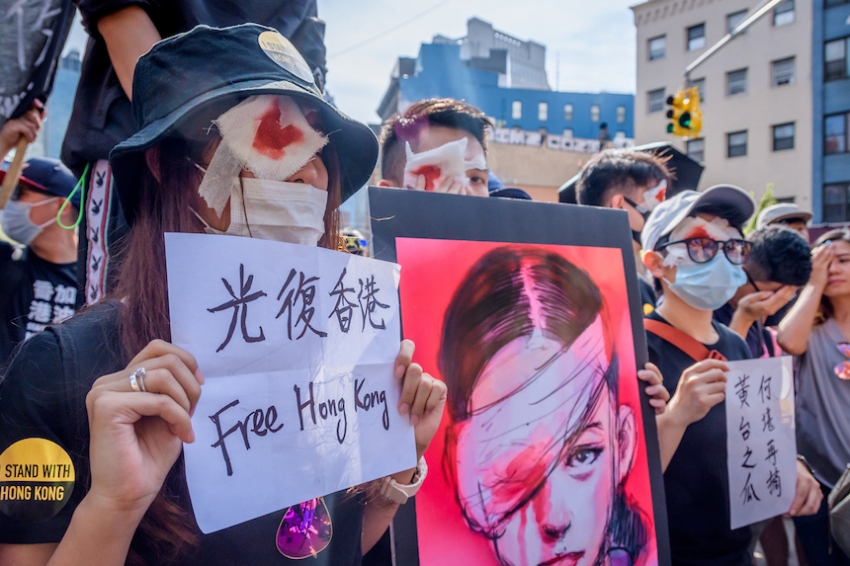 How the U.S. Left Should Approach China

From trade policy to Hong Kong, progressives must oppose xenophobia and nationalism while advancing labor and human rights.

To halt our descent into this abyss, and to defeat Trump, we must reject this false choice between Trump’s anti-China protectionism and the “free trade” status quo that preceded him.

While Trump's trade war with China threatens to trigger a global recession, Trump is reacting by continuing his economic attacks as well as blaming supposed internal enemies, such as the “fake news media.” This emerging feedback loop between deepening nationalism and economic dysfunction is reminiscent of dynamics that led to World War II.

To halt our descent into this abyss, and to defeat Trump, we must reject this false choice between Trump’s anti-China protectionism and the “free trade” status quo that preceded him. The way forward is not mutual attacks on each other’s economies. Instead, in solidarity with labor activists in China, we should demand U.S. politicians commit to ending the trade war and renewing trade negotiations centered on global standards for wages, working conditions and labor rights to improve living conditions and create jobs in the United States, China and beyond.

To get significant concessions from China, a progressive U.S. government must make proposals in our mutual interests. The United States could offer, for example, to collaborate with China’s Belt and Road Initiative, a massive program financing infrastructure around the world—on the conditions that it focus on clean energy and transportation infrastructure, with protections for workers and communities. Another possibility would be to cooperate in the reform of the World Trade Organization and other transnational institutions, correcting the biases that favor the business interests of wealthier countries over those of the Global South.

But, progressives may ask, how could we seek deescalation and cooperation with a country engaged in human rights abuses? We must also address the China-backed crackdown on anti-government protesters in Hong Kong and the internment of more than 1 million Uighur Muslims in re-education labor camps. Protecting civil rights and political freedoms in Hong Kong is strategically necessary; labor organizations in Hong Kong, such as China Labour Bulletin and Students and Scholars Against Corporate Misbehaviour (SACOM), serve as a source of training and support for activists and progressives within mainland China, and also link mainland Chinese activists to international organizers. This link is essential to efforts to build grassroots solidarity and counter nationalism in both the U.S. and China.

One obstacle to this solidarity is that, in the West, concerns about Chinese rights abuses can easily be co-opted for racist right-wing politics. For example, at one Canadian university, after messages posted on a campus bulletin board in support of Hong Kong protesters were vandalized, a popular student Facebook group circulated a meme accusing mainland Chinese students of being spies.

For years, the most prominent Washington ally for Uighur and Hong Kong activists has been Republican Sen. Marco Rubio, a right-wing nationalist positioning himself as a top anti-China hawk. Rubio-backed legislation—some of which has won the support of progressive politicians, including Sens. Elizabeth Warren and Bernie Sanders—is shaped by anti-China politics, threatening punishment against the Chinese government and China’s economy in the name of human rights.

This “all sticks, no carrots” approach will not be effective. Just look to Trump’s trade war: While it’s damaged China’s economy, it has not convinced the Chinese government to concede to U.S. demands. Instead, offering new forms of cooperation around shared goals can increase our leverage to end human rights abuses.

This strategy will also address the root causes of the crackdowns, which get too little attention in Western discourse: the pressure on the Chinese government to maintain economic development and social control in the face of worsening economic conditions, which are only exacerbated by U.S. economic attacks. In cities across China, as in Hong Kong, there is growing discontent with inequality, overwork, the loss of upward mobility and a sense of powerlessness. The Chinese government manages this specter of social unrest through censorship and crack-downs on civil society, which is why China has been so un-compromising with Hong Kong protesters: Conceding to their demands could delegitimize the regime in mainland cities as well.

Meanwhile, the Uighur concentration camps—which the government justifies with Islamophobic “war on terror” rhetoric borrowed from the United States—serve the purpose of securing the territory of Xinjiang for the exploitation and transportation of natural resources, especially oil and gas. U.S. economic cooperation could be an opportunity to reduce this oppression.

This internationalist frame-work is not yet common sense among U.S. progressives. To make it so, we need greater political education within our movements. We must also organize within diaspora communities, of people with roots in both mainland China and Hong Kong, to pressure politicians around these issues. Meanwhile Uighurs and Muslim Americans of any origin can lead other progressives in understanding the need to combat the cultural genocide of Muslims in Xinjiang.

De-escalating U.S.-China tensions while simultaneously addressing human and labor rights abuses is the only path forward to secure global peace, a just global economy and a global response to the climate crisis. There are tensions between these goals, but only by confronting them can we develop a response that rises to meet the present crisis.

Tobita Chow is the director of Justice Is Global, a special project of People’s Action that is building a movement to create a more just and sustainable global economy and defeat right-wing nationalism around the world.