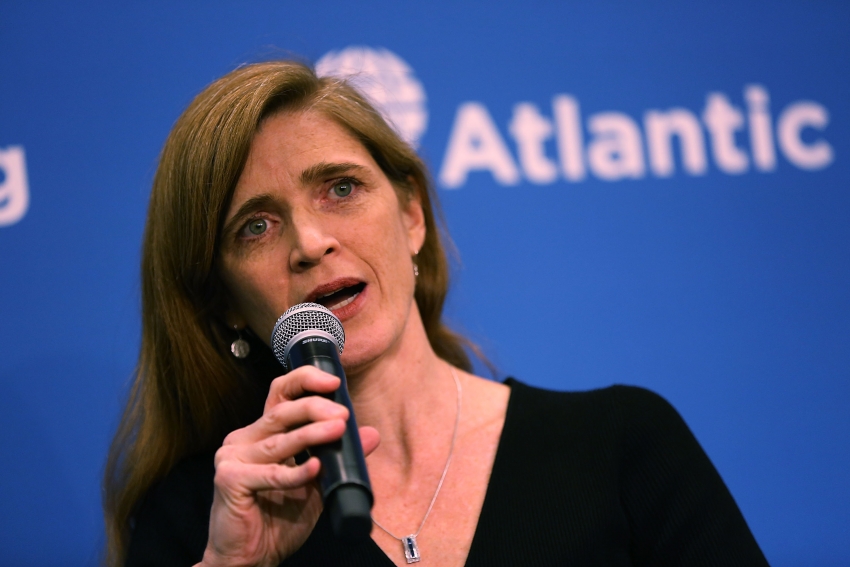 Samantha Power speaks during a discussion at the Atlantic Council on January 17, 2017 in Washington, DC. (Photo by Joe Raedle/Getty Images)

How Dare Samantha Power Scrub the Yemen War From Her Memoir

Power backed the disastrous U.S. intervention in Yemen. But you wouldn’t know that from reading her much-lauded memoir.

Despite this glaring omission, her memoir has received mostly positive reviews that fail to criticize her for helping turn Yemen into the world’s worst humanitarian crisis.

Before serving as the U.S. Ambassador to the United Nations, Samantha Power served on President Obama’s National Security Council, where she was instrumental in advocating for intervening militarily in the Libyan civil war. While serving as UN Ambassador during Obama’s second term, she continued to advocate for military interventions, this time in the Syrian war. In both cases, she framed her case for intervention as a moral one—a “humanitarian intervention” necessary for saving Libyans and Syrians from their dictators.

These interventions, however, were anything but humanitarian: They led to a sharp increase in the loss of human lives, exacerbated a refugee crisis, enabled extremist groups, and caused an overall exacerbation of already-tenuous civil conflicts. Yet, in her recently-published memoir, The Education of an Idealist, Power downplays her role in the bloodshed that followed in Libya, and she goes as far as lamenting Obama’s inaction earlier in the Syrian Civil War. Though these interventions are certainly career-defining, they are also not the only foreign policy injustices by which Power should be remembered.

The most striking thing about Power’s memoir is her complete omission of her role in what became the world’s worst humanitarian crisis: the ongoing U.S. intervention in Yemen.

In 2011, two years before Power’s tenure as Ambassador to the UN began, Yemenis protested against long-time dictator Ali Abdullah Saleh who eventually resigned and transferred power to his then-vice president (and now president) Abdu Rabbu Mansour Hadi. By the time Power took office in August 2013, U.S. policy in Yemen was defined by drone warfare, while Yemenis awaited an election following Hadi’s two-year term. Then in late 2014, the Houthi rebel group marched to the capital Sana’a, in what many saw as a coup, thereby threatening Saudi Arabia’s interests in Yemen. Months later, a coalition consisting of Saudi Arabia, the United Arab Emirates and other neighboring countries launched a surprise attack on Yemen, ostensibly aimed at restoring Hadi to power.

Her support did not waver when evidence surfaced that the Saudis and Emiratis were fighting alongside members of al-Qaeda. By the end of her tenure, at least 10,000 Yemenis were dead and at least 80% of the population was in need of humanitarian aid. Despite this, there were no public statements made by Power at the time indicating waning support for the disastrous U.S. intervention in Yemen.

In June 2016, Ambassador Power was asked to comment on then-UN Secretary-General’s Ban Ki-moon’s stunning admission that Saudi threats to UN funding led him to remove Saudi Arabia from a list of armies responsible for killing and wounding children (Saudi Arabia was initially on that list for its role in targeting Yemeni children). Power and her staff reportedly ignored a journalist’s questions about this. “Since news broke of Ban’s decision, I have asked Power’s office for a direct response to Saudi funding threats,” journalist Samuel Oakford wrote for Politico in July 2016. “Neither she nor her staff has ever replied.”

Years later, Power still prefers in her memoir to look away from Yemen rather than confront her role in enabling the Saudis to kill innocent Yemenis when she had the power to oppose such aggression.

Yemen is mentioned twice in her book, with neither reference having anything to do with the war in Yemen. Such a glaring omission can only be seen as a lack of reckoning and accountability for her actions as a representative of the United States at the UN at the onset of the war in Yemen. During her critical role at the UN, the Obama administration supported the Saudi and UAE coalition militarily through targeting assistance, intelligence, midair refueling, arms sales and training. Furthermore, Power helped provide cover for the Saudis and the Emiratis at the United Nations, allowing them to investigate their own crimes, and enabling them to carry out atrocities against civilians with impunity.

Her omission of Yemen is indeed surprising given her new-found criticism of the U.S. role in the war in Yemen. Months after leaving office, Ambassador Power began tweeting against the war in Yemen, even going as far as openly acknowledging that it was wrong for the Obama administration to support the Saudi-led coalition while it killed civilians and imposed a famine-inducing blockade on the country. Yet, when writing her own story, she chose to ignore Yemen altogether.

Despite this glaring omission, her memoir has received mostly positive reviews that fail to criticize her for helping turn Yemen into the world’s worst humanitarian crisis. And while the press and Congress have become much more critical of the war in Yemen since Trump’s election, Obama and his officials remain relatively unscathed by criticism for their role in launching the U.S. intervention in the Yemen back in 2015. Had there been more outrage and calls for accountability at the onset of Obama’s unconstitutional intervention in Yemen, perhaps Trump would not have had a war to inherit. Perhaps nearly 100,000 Yemenis would not have been killed. And perhaps 85,000 Yemeni children would not have starved to death.

In choosing to entirely ignore one of her most glaring failures—as a self-proclaimed activist and diplomat—Ambassador Power missed a crucial opportunity to set the record straight on her horrific actions and inactions as ambassador. In the eyes of this Yemeni-American, Ambassador Power remains neither educated nor an idealist.