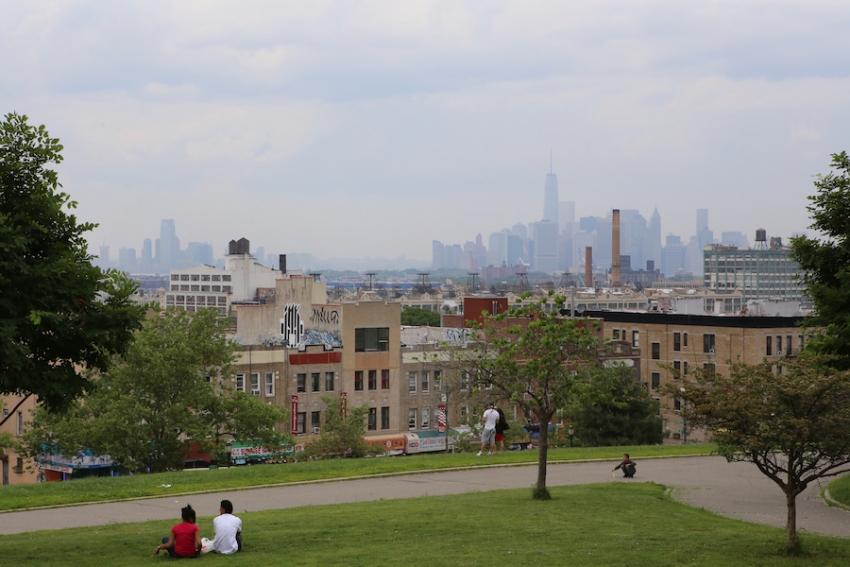 Residents of Sunset Park relax against the backdrop of the Manhattan skyline. Sunset Park, where over 75% of the population is non-white, has higher levels of air pollution and less access to healthy food options than other New York City neighborhoods like Greenwich Village and Park Slope, according to the New York City Department of Health and Mental Hygiene. (Busà Photography / Getty Images)

Why climate justice advocates have been demanding this since long before the Green New Deal.

Climate policy has often been determined by the wealthy and powerful—those who are causing the crisis—and its record is one of failure.

When the Green New Deal resolution was introduced by Rep. Alexandria Ocasio-Cortez (D-N.Y.) and Sen. Ed Markey (D-Mass.), many were confused by its scope: Why would a climate plan also promise housing and healthcare?

But the resolution’s emphasis on economic justice showed AOC and Markey were paying attention. Environmental justice advocates have long connected pollution with poverty and racism, and as Michelle Chen reported for In These Times in August 2009, these connections hold true for climate change. In “Falling Through the Climate Gap,” Chen writes:

Climate change will exacerbate regional health disparities tied to industrial air pollution. In many areas, people of color suffer greater impacts from dirty air, because they are more likely than whites to live in communities heavily exposed to pollution sources like coal-fired power plants [and] oil refineries. …

Many urban neighborhoods … are prone to the “heat island” effect: Surfaces absorb heat and raise area temperatures. Further, the prevalence of heat-trapping surfaces in a neighborhood correlates strongly with poverty and the proportion of people of color.

As seen in the uneven destruction wrought by [Hurricane] Katrina, a community’s resilience is often determined by social privilege. Marginal populations tend to lack insurance and be neglected by emergency response and healthcare systems. …

The poor and people of color are disproportionately threatened by potential floods. Their vulnerability is heightened not only because of where they live, but also factors like limited English ability and lack of access to emergency transportation. …

Extreme weather … could drastically increase energy prices, making it harder for working-class families to cover the cost of electricity. Climate volatility could also lead to job losses in the farming and tourism sectors.

Because of these disparities, environmental justice advocates insist that “investments in social services, housing and infrastructure” are critical to the climate fight, Chen reports.

The relatively moderate climate bill Congress was considering in 2009 (co-authored by Markey) never passed. The next big federal climate push only took off in December 2018—the Green New Deal. As Christine MacDonald reported for InTheseTimes.com in September, several leading presidential contenders have put out detailed plans for how they’d use the Green New Deal to support marginalized communities.

Climate policy has often been determined by the wealthy and powerful—those who are causing the crisis—and its record is one of failure. It’s high time those who will be most affected set the priorities.