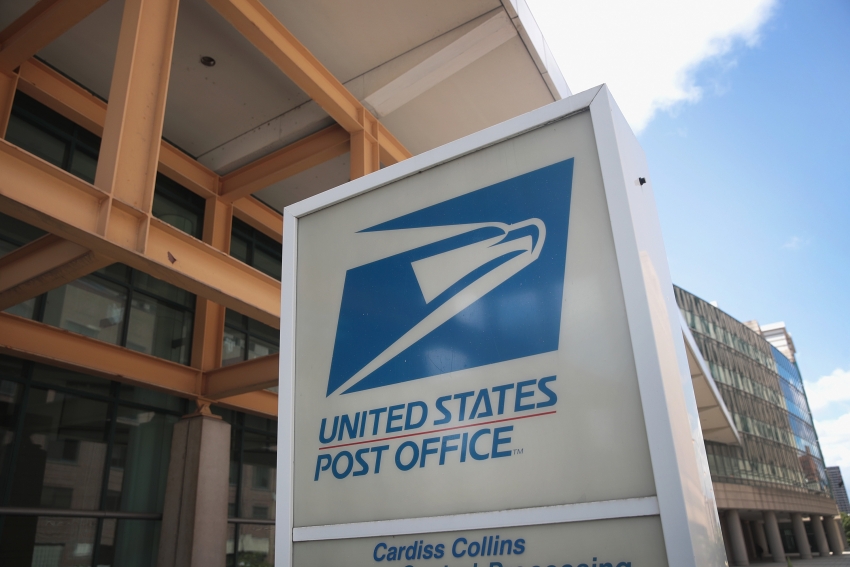 Mail delivery is just one aspect of what a modern USPS could provide. (Photo by Scott Olson/Getty Images)

The Postal Service Is the Most Popular Federal Agency in America. Let’s Massively Expand It.

Americans love the postal service. From banking to combating climate change, the public agency could be used to provide so much more.

True modernization would expand the agency’s ability to serve the common good, not undermine it.

For most of its 244-year existence, the United States Postal Service (USPS) was widely considered as an innovative powerhouse binding the American experiment together. Alexis de Tocqueville, the French diplomat who toured America in the 1830s, called it a “great link between minds.” During World War I, the post office teamed with the Department of Agriculture to institute a “Farm to Table” program to help distribute produce and other nutrient-rich foods across the country. Today, USPS stands as Americans’ favorite federal agency.

Since the 1970s, however, a combination of financial woes and political attacks have wounded the post office. What would it take to return USPS to a pioneering force capable of addressing our country’s multiple crises? Why not leverage the nearly 250,000 letter carriers and over 30,000 post offices that blanket all 50 states for more than just mail delivery? Why not expand the workforce and presence of the American public’s most favored government agency?

With mega companies like Amazon vying for the future of delivery, and conservatives increasingly calling for privatization, the U.S. Postal Service needs a makeover, not a dismantling.

In an era of little faith in government, a reimagined postal service could demonstrate how public solutions can solve many of our collective problems, from climate change to a predatory financial industry. That’s exactly what the post office did in the country’s early days.

As journalist Winifred Gallagher describes in her 2016 book How the Post Office Created America, universal mail service helped spark a communications revolution rivaling that of the telegraph through slashing the price of correspondence and buoying westward expansion. The 1792 Postal Act effectively underwrote newspaper circulation, spreading national and global news across the newly formed states and territories.

In 1897, a resident of the Arizona Territory wrote to the Postmaster General, “I am more than ever proud of being an American citizen. I live three and a half miles from the Tempe post office, and have been sick for a week past, yet my mail is brought to my door every morning, except Sunday.” The abolitionist John Brown served as a local postmaster before making his contribution to emancipation, just as did Abraham Lincoln.

But by 2001, as first-class mail usage began to decline, and scares of anthrax increased following the 9/11 terrorist attacks, USPS’s financial losses were growing. Five years later, the Republican-controlled Congress passed the Postal Accountability and Enhancement Act, limiting its ability to innovate beyond the delivery of mail and packages, just as the internet began to boom. The law also required the agency, which receives no taxpayer dollars, to make annual payments of $5.5 billion for ten years to fund the healthcare of its future retirees. Today, the postal service continues to bleed money despite delivering more packages than ever due to e-commerce.

Handing over the keys to the private sector would run counter to USPS’s stated purpose of connecting every American home and business, no matter how remote. Private corporations, following the whims of the market, would likely charge more for delivery in less dense, rural areas, while pricing out low-income residents everywhere.

True modernization would expand the agency’s ability to serve the common good, not undermine it.

The buildings themselves could be used to extend broadband infrastructure and be fitted with green technology like solar panels, electric car charging stations and rooftop farms. USPS’s Los Angeles mail processing facility has 31,000 solar panels, making it one of the city’s largest buildings generating electricity through solar. Depending on their location, some buildings could even be rebuilt as community-controlled, mixed-use development, to include affordable housing.

USPS could also return to providing affordable banking services, as it did from 1911 to 1967. In addition to the international and domestic money orders it already sells, the post office could allow Americans to collect savings, cash paychecks, transfer money electronically and pay bills. Sen. Bernie Sanders (I-Vt.) and Rep. Alexandria Ocasio-Cortez (D-N.Y.) recently introduced such postal banking legislation aimed at curbing predatory lending practices. Such a move would help catch the country up with the rest of the world: Less than 10% of post offices across the globe do not currently offer basic financial services.

None of these ideas are as revolutionary as it was to blanket the country with post offices. Yet, a truly modern postal service would be more than the sum of its parts. It would help restore confidence in the public sector’s role in serving the common good, at a time when faith in government seems so hard to come by.