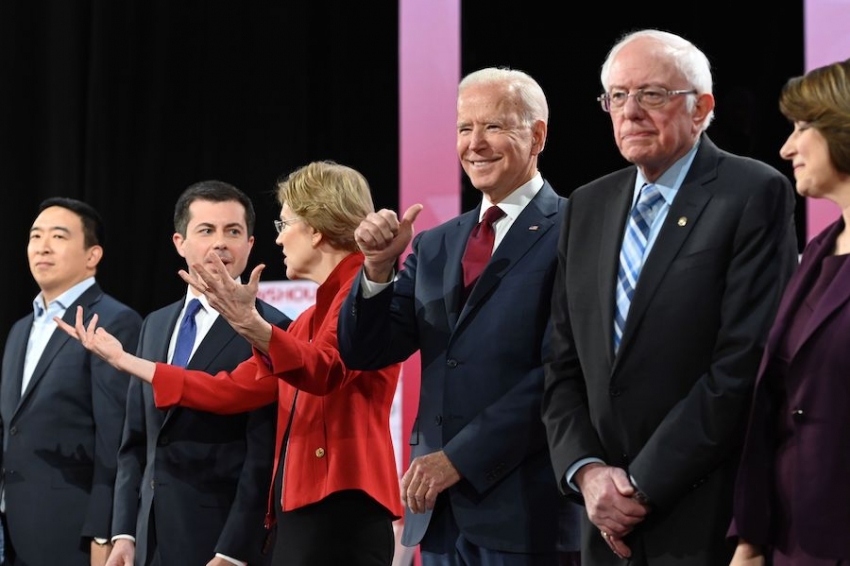 Democratic presidential hopefuls Pete Buttigieg and Joe Biden may get an edge over opponent Sens. Elizabeth Warren and Bernie Sanders if the senators are pulled off the campaign trail to participate in a Senate impeachment trial. (Photo by ROBYN BECK/AFP via Getty Images)

The campaigns have plans, but some supporters worry Biden and Buttigieg will get an edge in Iowa.

The senators are not required to be present at the trial, but given that the Senate is majority Republican, Democratic senators will likely feel an obligation to attend.

This story has been updated.

Some on the Left have debated whether impeachment is a distraction from more pressing political issues. Others have criticized the Democrats’ handling of a matter: In a Tweet, Jamelle Bouie, an opinion writer for The New York Times, referred to the timing of the impeachment during the primaries and the narrow focus on Ukraine as “absolute political malpractice.”

What’s sure is that a Senate trial will be a major problem for the four sitting Senators running for the Democratic nomination for president, including Bernie Sanders and Elizabeth Warren.

For more than a year, Sanders and Warren have been on the march around the country, holding town halls, rallies and other campaign events. Sanders appeared in 102 events in Iowa alone between Jan. 1, 2019 and Dec. 19, 2019, while Warren appeared in 77 events in Iowa during that period. A Senate impeachment trial will put a near-halt to that travel just as the presidential primaries take off..  With Iowa’s caucus February 3 and New Hampshire’s primary soon after, this could prove advantageous to the campaigns of the other two frontrunners, former Vice President Joe Biden and Mayor Pete Buttigieg. In Politico, journalist Marc Caputo quotes a Biden campaign advisor who says that if Sanders and Warren have to be in Washington for impeachment hearings “while we’re in Dubuque[, Iowa], that’s their problem.”

But it appears the candidates have some workarounds in mind. Sean Bagniewski, chair of the Polk County Democratic Party in Iowa, told Politico that candidates do not have to remain on the campaign trail every day to remain relevant. He argues that if Warren and Sanders could make their way to the living rooms of Iowans through TV coverage of impeachment, it would be a net positive for their campaigns.

The Sanders and Warren campaigns, as well as the organizations that have endorsed them, also have plans.

“His campaigning has knocked on the most doors in Iowa and made the most calls,” says Reardon, “[Bernie] believes in the power of movement politics and organizing everyday to make that change.”

Reardon emphasizes that regardless of the timing of the hearings, the Democratic nominating contests will be decided by turnout. “Get out there and organize!” he tells Sanders supporters. “Change happens from the bottom up. The only way the people’s candidate wins on caucus night is when people get out there and organize their family, friends and neighbors and build a people/planet first movement.”

Will Kang is a fall 2019 editorial intern for In These Times.