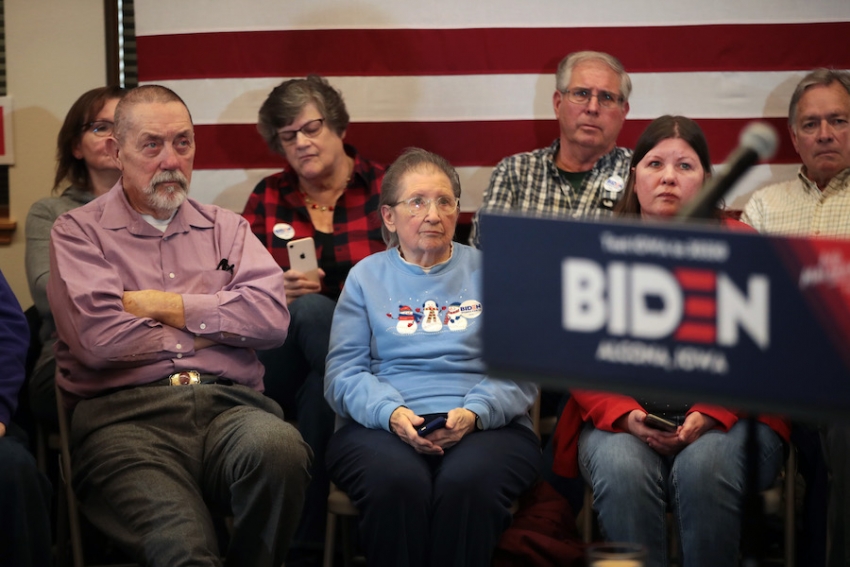 As the Iowa Caucus approaches, Democratic voters zero in on "electability," a shibboleth that the Biden camp has invoked throughout the primary race. (Photo by Scott Olson/Getty Images)

Don’t believe arguments about “electability” coming from the corporate wing of the Democratic Party.

Centrist Dems have weaponized “electability,” using it to limit the range of possible candidates, both in demographics and ideology.

And so, we begin the Roaring 2020s with war, assassination and firestorms on a burning Earth. We know it will be a decisive decade. What remains to be seen is whether, here in the United States, “We the People” break with the rule of the corporate oligarchy and take measures to ensure a democratic future on a habitable planet. The window of opportunity to save the world has become a narrow slit. Will we make it through?

That will be determined in no small measure by the 2020 General Election, which is shaping up to be a three-way race in a two-party system.

First, we have the Republican Party, its fealty fully pledged to President Donald Trump. The Christian Right loves that he is stacking the courts with culture warriors. The corporate Right likes that he cuts taxes and guts environmental regulations. And white nationalists like his racist theatrics and the gratuitous cruelty of his immigration policies.

Second, we have the Democratic Party’s progressive wing and its standard bearers Elizabeth Warren and Bernie Sanders. Their populist calls for a redistribution of wealth and an expansion of a social democratic welfare state—tuition-free public college, Medicare for All, the Green New Deal—resonate with a growing number of voters.

Third, we have the Democratic establishment. It has hitched its wagon to the concept of “electability,” which national polls reveal to be a top concern of Dems. In other words: Who can beat Trump? These centrist Democrats and their allies in the corporate media vehemently oppose any meaningful attempts to redistribute wealth and power. Bereft of appealing policy proposals to inspire the base, they have weaponized “electability,” using it to limit the range of possible candidates, both in demographics and ideology. It is also employed as a cudgel against any transformative policy, the argument being that Big Change will spook independent voters—and thereby help reelect Trump—completely ignoring the potential of big ideas to turn out voters otherwise likely to sit out.

Their candidate is Joe “Electable” Biden. Their candidate’s main policy expert is Bruce Reed, who accompanies Biden on the campaign trail. As architect of President Bill Clinton’s 1996 so-called welfare reform, Reed coined the “end welfare as we know it” slogan. A former CEO of the now-defunct Democratic Leadership Council, Reed left his post in 2010 to serve as executive director of President Barack Obama’s National Commission on Fiscal Responsibility and Reform, which unsuccessfully attempted to reduce the deficit by cutting cost-of-living increases for Social Security recipients.

Why Biden is so electable—a 77-year-old candidate who stepped onto the national stage in 1972 as the junior senator from Delaware and has twice run (and lost badly) for president—is never explained. A 1995 video has surfaced of Biden speaking in favor of a GOP-sponsored balanced-budget amendment. “When I argued that we should freeze federal spending, I meant Social Security as well,” he bragged. “I meant Medicare and Medicaid. I meant veterans’ benefits. I meant every single solitary thing in the government. And I not only tried it once, I tried it twice, I tried it a third time, and I tried it a fourth time.” And his backing of the Iraq War has rightly dogged him: As CNN reported, at a January 4 event in Des Moines, Iowa, “Biden again dishonestly suggests he opposed the Iraq War from the beginning.”

Is it any wonder that young people are not flocking to the Biden campaign? In a December 2019 poll of Iowa voters, only 6% of likely Democratic caucus-goers between 18 and 34 supported Biden, while 55% supported Warren or Sanders. For a Democratic Party establishment truly concerned with electability—now and in the future—that is the poll to pay attention to.