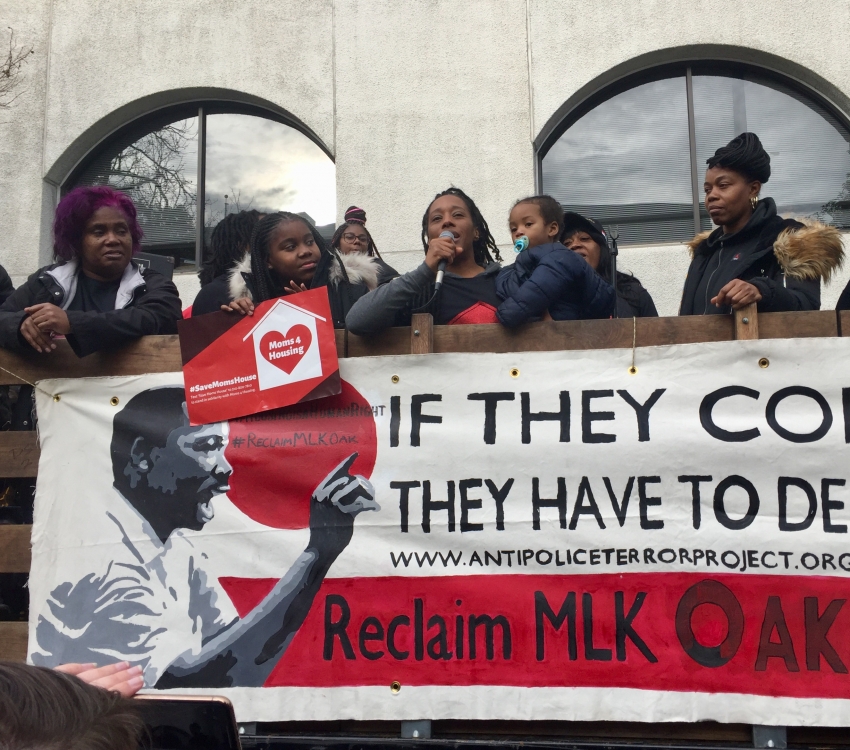 In Oakland, Moms 4 Housing occupied for a vacant home for two months—and now the corporate owner has agreed to sell it to a community land trust. But the moms say they’ll continue fighting to make sure housing is a human right.

“Moms 4 Housing have refocused the national debate on the need for housing justice, and have sharply and clearly articulated a roadmap for achieving some of it.”

For 58 days, four homeless black mothers lived with their children in a vacant 3-bedroom house in West Oakland, California.

Now, after a court battle, weeks of rallies with supporters and a militarized eviction, the mothers—Dominique Walker, Misty Cross, Tolani King and Sharena Thomas—can claim a stunning victory.

The mothers, organized under the name Moms 4 Housing, earned national media attention during their occupation for drawing clear line between the actions of real estate speculators and the human cost of the deepening housing crisis. Their message and method are already yielding results.

After the moms’ eviction from the home, California Gov. Gavin Newsom and Oakland Mayor Libby Schaaf announced new emergency initiatives to address homelessness. And on January 20, six days after their eviction, Moms 4 Housing got news they called “a huge win”: the real estate investment firm that owns the house agreed to sell it to the mothers through a local nonprofit land trust.

“We weren’t expecting any of this—we were expecting attention, but not nationally, not globally,” says Cross. “In the beginning, we were just expecting to be able to talk to these [owner] folks about negotiating a price for the home. We were expecting things to go smoothly. It wasn’t as easy as we thought.”

The difference between real estate and a home

Wedgewood Inc., the Redondo Beach-based real estate investment firm that owns the house the mothers occupied at 2928 Magnolia St., purchased it in July 2019 at a foreclosure auction for $501,078 cash before leaving it empty. Moms 4 Housing moved into the house on November 18, after the moms learned it was vacant through their work for the Alliance of Californians for Community Empowerment (ACCE). In the agreement announced on January 20, the City of Oakland said Wedgewood had made a good faith promise to sell the house to the Oakland Community Land Trust for “a price not to exceed the appraised value.”

The Oakland Community Land Trust (OakCLT) is a nonprofit that acquires land and makes it permanently available as affordable housing to low-income communities. Once the sale is finalized between Wedgewood and the OakCLT, Moms 4 Housing will be able to move back into the house and make payments to live there based on an affordability scale predicated on income, says Oakland City Councilmember-At-Large Rebecca Kaplan.

Carroll Fife, director of ACCE’s Oakland office, which supported Moms 4 Housing in their occupation of the home, said that she thinks Wedgewood decided to sell the house out of a fear that activists would occupy other vacant homes it owns around the country.

“The pressure is coming from all over the state,” Fife says. “And we told the public that Wedgewood is in 18 states and said, ‘Community, what do you wanna do?’”

After Moms 4 Housing moved in, Wedgewood faced increasing scrutiny over the fact it owns at least 125 homes in the Bay Area and specializes in flipping a huge volume of homes. Housing speculators like Wedgewood often purchase houses at foreclosure auctions in cash (something most individuals cannot do). They also often leave those houses empty if they think they could make more money if the market price increases down the line.

Wedgewood did not respond directly to questions about the timing or nature of the deal. In an email statement from PR agent Sam Singer, the company said it works to “improve the neighborhoods” where it acquires properties, and that the house’s sale “is a step in the right direction in helping to address Oakland’s homelessness and housing crisis.”

But advocates say fixing Oakland’s housing crisis must move beyond investors making vacant units available to address the legacy of racism in America, particularly in the real estate industry.

In her new book Race for Profit: How Banks and the Real Estate Industry Undermined Black Ownership, author Keeanga-Yamahtta Taylor describes how federal policy after the end of redlining in the 1960s continued to encourage the real estate industry to discriminate against black homeowners through policies of “predatory inclusion.” These policies included selling subpar housing to African Americans under exploitative terms.

And this history is especially salient in the previously redlined neighborhood of West Oakland, situated in the middle of the most expensive metro area in the country.

“[Moms 4 Housing] highlights the particular nature of the housing crisis in Northern California where the costs of rents and certainly homeownership have dramatically outpaced the rate of inflation and the average wages and salaries of ordinary people in the area,” said Taylor. “This, of course, has a disproportionate impact on African-American families who suffer from greater rates of unemployment, under-employment, poverty and, as a result, housing insecurity.”

But Taylor said the mothers’ movement can provide a model for the rest of the country, regardless of rent prices. “Moms 4 Housing have refocused the national debate on the need for housing justice, and have sharply and clearly articulated a roadmap for achieving some of it.”

Oakland’s housing crisis is in dire need of a solution. In 2019, the city estimated that 4,071 people were living on the street, in vehicles or in shelters—an increase of 47% in two years. A 2017 survey of self-reported data to EveryOne Home shows that nearly 70% of homeless individuals in the City of Oakland are black, while the city’s total black population has dwindled in recent years down to 28%. And there are very real consequences to living on the street: In 2019, 137 unhoused people died in Alameda County. Meanwhile, U.S. Census data estimates that there are just under 6,000 empty homes in Oakland.

Cross and Walker are both from Oakland, and say they tried to use the city’s existing support systems to access housing, but weren’t able to find anything stable for them and their children. Both mothers have jobs. However, the minimum wage in the city is $14.14 an hour, and the “housing wage” that a family would need to earn to afford an average 2-bedroom apartment in the city is $40 an hour, says Nikki Fortunato Bas, an Oakland city councilmember who has been working closely with Moms 4 Housing.

Among a wide slate of proposed policies, Bas says she is working on requiring land trusts and co-ops get the first chance to purchase homes before real estate investors—a policy the city's January 20 announcement said Wedgewood endorsed.

However, Bas said that she’s concerned the city government won’t make meaningful change on the housing crisis any time soon without an “all-hands-on-deck” mentality.

“While I am hopeful, I am very aware that the pace at which government moves,” Bas says. “Until impacted communities actually feel a change, the type of organizing that the moms have been doing, the type of attention they have been drawing, is very needed to keep the pressure on decision-makers at every level of government.”

Cross says the Moms 4 Housing movement is about more than finding four mothers a place to stay, so their pressure campaign will not stop. She also said the four mothers all have found secure housing arrangements since the eviction, but wants the focus to remain on their larger fight to make housing a human right—not just under international law, but under California state and federal law, which could require passing a constitutional amendment.

And on Monday, soon after receiving the news of the Magnolia house sale, the mothers were back out pushing for change at Oakland’s “Reclaim MLK” event. They helped lead a march of hundreds of protesters from City Hall to the Alameda County Sheriff’s office seven blocks away.

Outside the sheriff’s office, Walker told her story of returning to Oakland after years living in Mississippi. She said she didn’t recognize the city, seeing thousands of people living on the streets and many of her friends and family displaced out of the city.

But looking out over the crowd, she smiled and said, “This is the Oakland I remember.”

Julia Clark-Riddell is a reporter and editor based in Oakland, California. She is the executive editor of HEMP, a quarterly print magazine focused on hemp and the environment, and the Associate Editor of Cannabis Now. She has previously worked for the Santa Barbara Independent, South Africa's The Star and In These Times as a Summer 2016 intern. She studied journalism and political science at Northwestern University. Follow her on Twitter at @jclarkriddell.