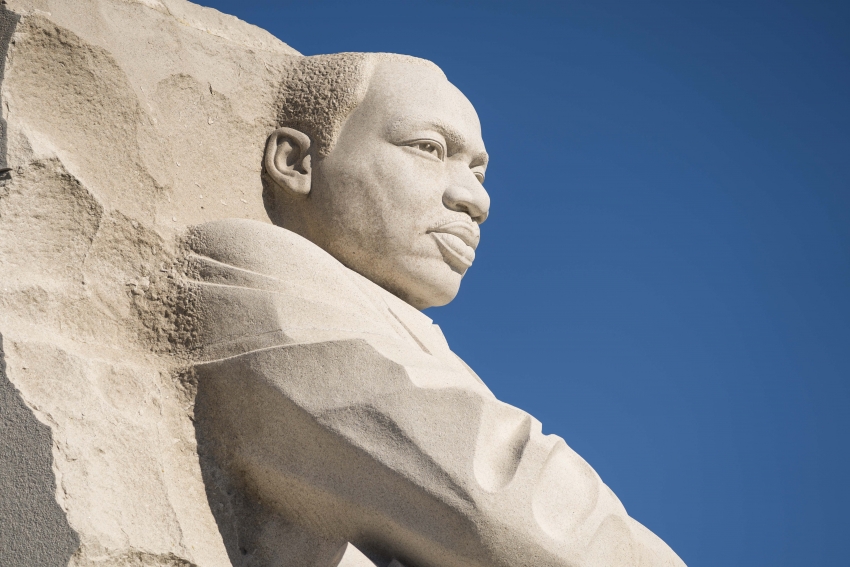 Universal programs benefit everyone and advance racial justice. That’s why Dr. King fought for them. (Photo by Sarah Silbiger/Getty Images)

Dr. Martin Luther King Jr. was a committed democratic socialist. If you want to honor his legacy, join the fight for universal social programs.

Whatever centrists pleading for moderation tell themselves, they are not on the side of Dr. King or the Poor People’s Campaign.

Dr. Martin Luther King Jr.’s memory casts a long shadow over the month of January, and sadly offers opportunities for the most eager of politicians to tag in one of history’s great moral heavyweights for their pet projects and causes.

For those who share King’s social-democratic convictions, that makes it especially important to call nonsense on efforts to scramble his radical legacy into something more popular—and benign—than it ever was during his actual life. Without it, the “Disneyfication” of King will surely continue.

The Poor People’s Campaign is marching on Iowa right now, calling on us to talk about this issue more…We gotta be making sure that we target our tax dollars where they will make the biggest difference. And I don’t think subsidizing the children of millionaires and billionaires to pay absolutely zero in tuition at public colleges is the best use of those scarce taxpayer dollars.

What Buttigieg is implying here is that means-tested programs are more progressive than universal ones, enlisting King’s memory to make his point. King is summoned whenever someone hoists up the revived Poor People's Campaign—a multiracial, working-class movement against poverty which King set in motion.

It’s obvious why you’d do this. King may have been widely loathed in his final years, but he’s now among the most admired figures in the same country that did everything it could to make his life an unbearable hell. Tapping any aspect of his memory throws moral weight behind a politician’s arguments.

The Democratic Party establishment is more than happy to take this tack amid its ongoing clash with its progressive base. One of the key fault lines in that conflict has been over competing visions of social policy. On one side, moderates like Joe Biden, Amy Klobuchar and Pete Buttigieg favor means-tested programs, where benefits only flow to those who can prove they are deserving enough. On the other, progressive leaders like Bernie Sanders, Alexandria Ocasio-Cortez and Ilhan Omar insist that core aspects of a dignified life shouldn’t be hawked on the market, but guaranteed to all.

As for King and his fellow leaders in the Poor People’s Campaign, we don’t have to wonder what they’d think. They chose a side: universal programs all the way down.

History is clear on this. The egalitarian vision offered by King and his socialist pals like Bayard Rustin and A. Philip Randolph included blunt calls for programs like universally guaranteed housing, income, healthcare and education. And today’s Poor People’s campaign, the one Buttigieg name-dropped, has been clear about its priorities. Its website includes a literal list of demands. “Guaranteed annual incomes” and “full employment.” “Free tuition at public colleges and universities” and “single-payer universal health care.” “Fair and decent housing for all.”

Dishonesty about these positions damages the integrity of anyone who we’re told represents the Very Serious wing of the Democratic Party. Whatever centrists pleading for moderation tell themselves, they are not on the side of King or the Poor People’s Campaign.

So what made King and so many other progressive icons go all in for universal programs?

As historian Thomas F. Jackson convincingly shows in From Civil Rights to Human Rights: Martin Luther Luther King Jr. and the Struggle for Economic Justice, King’s political convictions were forged alongside a “pilgrimage to Christian socialism.” Witnessing “the tragic poverty of those living around me,” King wrote of his childhood, taught him “that the inseparable twin of racial injustice was economic injustice.” He eventually came to call for a “radical redistribution of political and economic power” and expressed deep skepticism towards the entire “capitalistic economy.” Over time, “King’s disillusionment with the fragmented and unequal welfare state” had only “strengthened his democratic socialism.”

That last point is important. One of the great symbols of that “fragmented” and dysfunctional status quo, past and present, is the means-tested program. On the surface, means-testing sounds like a surefire way to guarantee benefits go to those who need them most. But this argument collapses under scrutiny. For starters, making people prove that they’re poor enough to receive benefits in a society where the poor are already treated terribly is cruel and humiliating, and many people understandably decide to avoid our country’s nasty treatment of welfare recipients. Then there’s the thick maze of paperwork and bureaucracy you’re forced to navigate, leaving behind millions who predictably don’t have the damn time. And because right-wingers in political leadership daydream about starving the poor and sometimes find liberals craven enough to join them, means-tested programs are always a hair-trigger away from being blown to smithereens.

Universal programs, meanwhile, suffer from none of this insufferable complexity. Just think of public libraries and parks, available to all. When funded through progressive taxation, where the wealthy pay a significantly larger share of their income than the working-class, these programs can reduce inequality and improve people’s lives at the same time. And because public schools, parks, libraries and quasi-universal programs like Social Security benefit the whole of society—and are typically beloved by all—they are much harder to cut or otherwise undermine.

The case for universal programs is obvious. Dr. King and the Poor People’s Campaign saw it clearly: they are convenient, reliable and durable as hell, improving people’s lives while freeing them to do more of what they love.

Thomas F. Jackson wrote of King’s deepening “commitments to democratic socialism” in the face of political moderation that failed to meaningfully address the material suffering of poor and working-class communities of color. That meant there was no room for clunky, humiliating and needlessly complex means-tested programs.

King’s legacy, and the Poor People’s Campaign’s unfinished work of building popular support for a more egalitarian society, should be broadcast across every corner of the country. But it should be the actual record. As the writer Marc Lamont Hill reminds us, far from being a universally-beloved political figure, King was a “Black radical anti-capitalist, anti-imperialist, revolutionary Christian who died as an enemy of the State.”

Eli Day is an investigative fellow with In These Times' Leonard C. Goodman Institute for Investigative Reporting. He is a writer and relentless Detroiter, where he writes about politics and policy. His work has appeared in the Detroit News, City Metric, Huffington Post, The Root, Truthout, and Very Smart Brothas, among others.