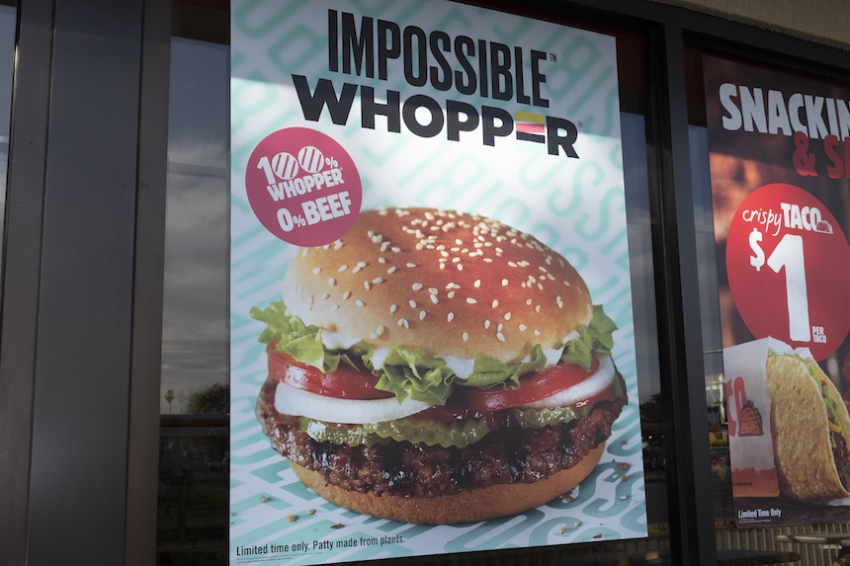 This piece is a response to “Fake Meat Is All the Rage—And It Can Help Us Fight Climate Change,” by Dayton Martindale.

The American diet continues to put meat in the center of its plate despite the well-established role of meat consumption in greenhouse gas emissions. Neither food critics nor celebrity chefs nor politicians have ever dared question that habit with much force—until tech burgers from Impossible Foods and Beyond Meat came onto the scene, at least, backed by hundreds of millions of dollars in venture capital.

In the past four years, the mainstream press began to regard the possibility that, hey! maybe there is something to this eating-less-meat thing—so long as it looks and tastes, you know, just like meat, and someone can make money off it. (Never mind that veggie burgers made with grains, beans and vegetables have been around for decades, and tofu has existed since at least 965 CE.)

Impossible Foods and Beyond Meat first marketed their highly processed meat-tasting products in more high-end settings, such as restaurants Momofuku Nishi and Saxon + Parole (where an Impossible burger costs $24). Then, seeing how successful their products were, they moved into fast food, where they believe they can have a bigger impact on the average American’s diet. It’s clear these corporate brands smell money in an industry that was once the arena of small, mission-driven businesses like tofu-maker Hodo Foods and local tempeh makers such as Barry’s in New York. (Shares of the publicly traded Beyond Meat cost $113.92 as of February 4.)

Impossible Foods CEO Pat Brown professes a lofty goal. “We see our mission as the last chance to save the planet from environmental catastrophe,” he told The New Yorker. A widespread adoption of plant-based diets could, indeed, provide better nutrition while using less land and water.

But here’s the flaw: Transitioning away from beef will not be enough to deal with the broader ecological crises we face, from climate change to biodiversity loss to resource scarcity. The Impossible Burger is mostly soy and the Beyond Burger is mostly pea protein. By producing these burgers on a massive scale for cheap, these companies are supporting a plant-based food system—but one that relies on monoculture rather than a diversified crop system. Diversifying crops is crucial to soil and wildlife health and helps keep small farmers in business. The Intergovernmental Panel on Climate Change reports that crop diversification sequesters more carbon, cycles nutrients more efficiently, reduces nutrient runoff and allows soil to retain more water—all of which makes farms more resilient to extreme weather. By relying primarily on soy and pea, Impossible and Beyond are doubling down on a harmful system.

What’s more, despite Brown’s professed commitment to eradicating “the use of animals in food production,” these high-tech fake meat giants do not inherently promote a broader shift away from animal products: Neither the Impossible Whopper at Burger King nor the Beyond sandwich at Dunkin’, for example, are even vegan. The Whopper comes with mayonnaise; the Dunkin’ sandwich has egg and cheese. While beef is the biggest culprit, all meat, dairy, eggs and seafood—the very things vegans don’t consume on principle—pose risks to biodiversity and the climate. According to one study, dairy alone produces 3.6% of global planet-warming emissions.

Especially with Tyson Foods, Nestlé and Kroger all dipping their toes into these faux-meat waters, one cannot help but be skeptical. Retrofitting veganism and vegetarianism onto typical Big Ag practices—with their focus on continuous worldwide growth and reliance on fast-food models—is little more than a billion-dollar Band-Aid. Simply adding green-friendly meat substitutes to our current meat-heavy food system will not, for example, magically undo the damage caused by factory farming.

Yes, a widely available alternative to beef might be better than nothing, but a study by Kroger found that 93% of Beyond Meat buyers also had animal protein in their carts. Without a major overhaul of the food system to promote diverse land use and discourage a dependence on animal products, all these tiny consumer choices add up to little actual change. Big fake meat is just big business as usual, but in green-washed packaging.

Alicia Kennedy is a writer from Long Island currently based in San Juan, Puerto Rico. She writes about culture, climate and cocktails for Eater, the Washington Post and The Baffler.