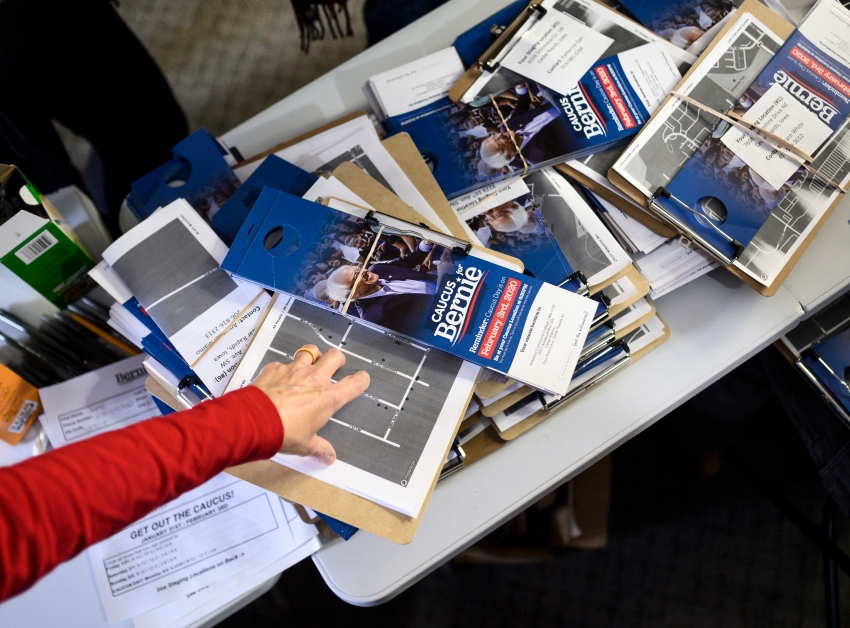 Why People From Around the World Have Volunteered for Bernie Sanders

“It affects all of us,” says Arturo, a volunteer who hails from Spain.

Those who volunteer their time for Sanders see this election as an event whose ramifications will affect them too.

Going door to door to canvass can be a tough experience for even the most seasoned veteran, but for Reidar Strisland there’s a minor added difficulty: He’s Norwegian, and canvassing in a new country.

Reidar, 30, has been in the United States since February 5 volunteering for the Bernie Sanders campaign. After spending time in New Hampshire and Texas, he finished up his trip by canvassing in Los Angeles.

His dedication to the campaign is by no means unique: Hundreds of international volunteers around the world are calling, texting and—when they can—even coming to the United States to knock doors for a candidate that has inspired them.

A plethora of volunteers

These international volunteers mobilize both individually and in groups, hailing from a variety of countries, some as far away as Japan or Australia.

Some groups have emerged to both register Democrats abroad and canvass other expats in support of Sanders. “France for Bernie 2020,” for example, is a mixture of American expats and locals like Laurent, a 41 year-old art history teacher and French citizen who talks about Sanders with American students in his class.

Groups like this exist all around the world, although the groups that appear to have the largest online followings are in Western Europe and Australia. Charlotte and Arturo, who are both members of “Madrid for Bernie,” told In These Times the group has expanded beyond making calls and texts to become a small community of politically engaged people.

Though the group is still in discussion about how to move forward, Charlotte said that its members are actively looking towards the future by building links with other parties and organizations. “Right now we are trying to connect and build a general network,” she said.

Though groups like Madrid for Bernie are currently small, they are representative of a wider grassroots progressive movement that has been taking shape across Western Europe. The Sanders campaign has both benefited from and contributed to the revitalization of a broader European Left founded on grassroots organizing and solidarity: Claire Sandberg, Sanders' National Organizing Director, for example, toured Europe in the wake of the 2016 election to teach party activists about distributed organizing. Investing in the tightening of these links has paid off. Reidar himself was one of those activists who invited Claire to Norway to train his fellow party activists.

Mathias, a 45-year-old copywriter from Muenster, Germany, spent 12 days knocking doors in New Hampshire and South Carolina. Before his  “Bernie Journey,” he had knocked doors in Crawley, a town 30 miles south of London, for Jeremy Corbyn in 2019.

Transnational connections are also being revitalized at the party level. In the early weeks of March, for example, activists from European-left parties and organizations like Socialist Youth of Austria, JUSOS (Young Socialists in the SPD), JUSO Switzerland (Young Socialists Switzerland), and the organization Momentum (United Kingdom), came to knock doors in Illinois with the Chicago Democratic Socialist of America (CDSA)’s Sanders campaign.

Those who volunteer their time for Sanders see this election as an event whose ramifications will affect them too. Volunteers told In These Times that, going door to door, they engaged with people the way all Sanders canvassers are taught to: by highlighting how this election is personal for them as well.

“When I start talking about why I’m here, I start by saying that it’s personal for me because of climate change, and I think Bernie is the only one really willing to lead,” Reidar told In These Times.

Reidar isn’t the only one who is focused on climate change: Though there were a variety of reasons for their support for Sanders, it was clear that they were united by the threat posed by global environmental catastrophes.

For Arturo, a 29-year-old Spaniard who makes calls in both English and Spanish, this election was about the future: “My main concern in life is climate change [and] I see him as the only candidate that will go balls to the wall,” he told me. “I’m not American, these elections are not of my country, but this issue does affect me. It affects all of us.”

Charlotte Bellgardt, a 25-year-old German student of medicine currently studying abroad in Madrid, also got involved because of climate change. “Climate change has many people my age and younger anxious about the future and I feel like Bernie Sanders is the one who is really serious about it,” said Charlotte.

In addition to the calls they have received, scores of voters have also had their door knocked by a Norwegian, an Australian, or a German who was able to skillfully echo to voters one of Sanders’ key arguments: that his policies are not that radical.

Mathias, when confronted with skepticism about Sanders’ free college and free healthcare plans, would tell of his own experience: “It’s one thing if you see it on TV but it’s another thing if someone comes to your door and says, ‘I went to university and didn’t pay a penny.’”

Though many campaigns like to highlight their “grassroots” support, the Sanders campaign has eschewed top-down organizing for a more democratized, volunteer-driven model known as “distributed organizing.” While the campaign uses paid staffers for traditional work, the Sanders campaign has relied upon vast numbers of volunteers to organize events, canvass their neighborhoods, and make calls using easy-to-use tools that they provide to supporters.

The hope is that these volunteers will gather in groups to begin organizing in their own communities, bringing new people into the movement. International groups like this now routinely gather to use the campaign-provided Slack channel, dialer, and texting software to spread the word.

Some are brand new to organizing. Laurent, a volunteer with “France for Bernie 2020,” had also never gotten involved before this election. “Bernie is the first political figure that has given me the guts to canvass,” Laurent underscored.

Even if Sanders is not elected, his campaign will have left a mark in that it has inspired young and old people to get political active for the first time. As Charlotte told In These Times, “it’s quite addictive to use your voice.”

Disclosure: This author has volunteered with the Bernie Sanders campaign.Views expressed are those of the writer. As a 501(c)3 nonprofit, In These Times does not support or oppose any candidate for public office.

Gabe Levine-Drizin is a Chicago-based freelance journalist and can be followed at @gabepld.