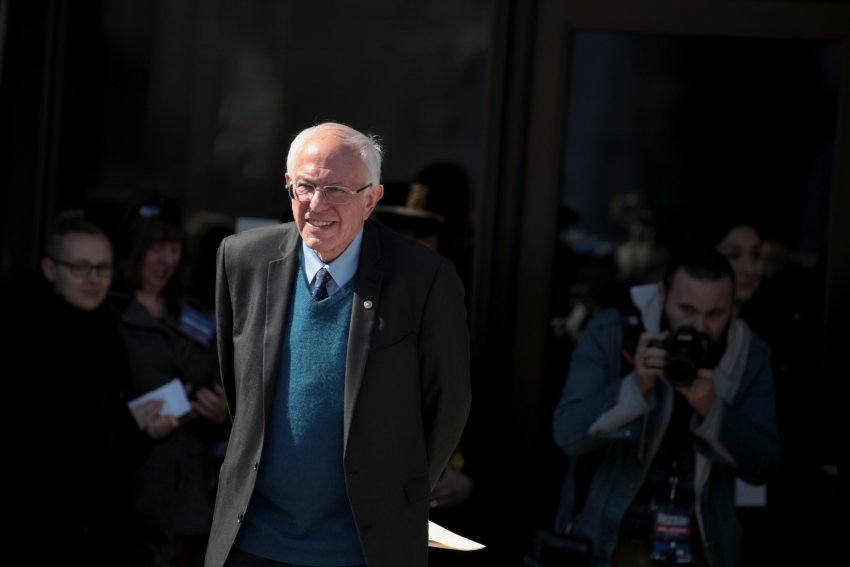 Why Bernie Must Keep Going: It’s About Our Future

Sanders is down, but he’s not out. And he can still help advance a progressive agenda for all of us.

Bernie Sanders has been forging (and largely winning) the campaign of ideas and policies since 2016.

With the latest primary results narrowing Sen. Bernie Sanders’ path to the Democratic nomination, a number of mainstream media pundits and establishment politicians have urged Sanders to drop out of the race in the sake of “unity.”

Thankfully, Sanders is forging on, preparing for a one-on-one debate with Joe Biden on Sunday, as well as the upcoming primaries in Arizona, Florida, Ohio and Illinois.

It’s worth noting that, with less than half of the delegates chosen, Biden leads by only about 150 delegates, with 109 delegates still to be apportioned from states where Sanders is either leading significantly or tied. This race is not yet finished, and there’s still time or Sanders to either stage a comeback or, at minimum, to make a major impact at the Democratic convention in Milwaukee this summer.

Some may ask—with a clearly diminished chance at victory and the need to ultimately unite against Trump, why should Sanders continue? There are a few important reasons for Bernie to campaign all the way to the convention, even if he continues to be behind in the delegate count.

First: you never know what can happen on the campaign trail, and Biden is a risky nominee from a variety of vantage points. With a close race for the nomination, and even with Sanders’ diminished chances, it remains vital to present a serious and viable alternative to what could be a disastrous matchup of Biden versus President Trump.

Second: Biden is losing hugely among younger voters, and significantly among Latinx voters—two critical voting blocs for any Democratic nominee. As CNN reported following Super Tuesday, “Looking across all the contests with an exit poll, Sanders won an astounding 61% to Biden's 17% among voters under 30 years old. He even beat Biden by 20 points (43% to 23%) among those between 30 years old and 44 years old.” Sanders has also won independent voters in 13 out of the 16 states where exit polls were conducted.

Democrats should fight for a nominee who can mobilize and inspire these vital voters. While Biden is winning strong majorities of older African American voters, especially in the South, there remain significant generational, geographic and ideological splits among all voters.

Third, and perhaps most critical: Bernie Sanders has been forging (and largely winning) the campaign of ideas and policies since 2016, and this effort must go on for the good of the country—and planet.

This battle for ideas and policies must not be swept under the political rug. With the fixation this election on “anybody but Trump,” and “blue no matter who,” the urgent need for significant policy change—particularly to address the fast-ticking climate crisis—is being largely overlooked.

Yes, of course defeating Trump is essential to blunt his administration’s far-right policies and achieve progress on questions of justice and equality. But if we don’t continue to push for the policies and ideas that are essential to repairing the climate crisis and creating a more equitable society, then we all lose out.

In his speech the day after Tuesday, Sanders laid out some of the important questions he plans to challenge Biden on in Sunday’s debate:

Joe, what are you going to do to end the absurdity of the United States of America being the only major country on earth where health care is not a human right? Are you really going to veto a Medicare for all bill, if it is passed in Congress?

Joe, how are you going to respond to the scientists who tell us we have seven or eight years remaining to transform our energy system before irreparable harm takes place to this planet because of the ravages of climate change?

Joe, what are you going to do about the fact that we have the highest rate of childhood poverty of almost any major country on Earth and are living with the fact that 500,000 people tonight are homeless and 18 million families are spending half of their income to put a roof over their heads?

Joe, importantly, what are you going to do to end the absurdity of billionaires buying elections and the three wealthiest people in America owning more wealth than the bottom half of our people?

So yes—in the name of a still potential Sanders nomination and presidency, and of pressuring any Democratic nominee to embrace urgently necessary policies like a Green New Deal, Medicare for All, free public college, student debt relief, a $15 federal minimum wage and other vital changes—Bernie Sanders, and the movement he’s galvanized, must keep organizing, campaigning and battling.

In so many ways, the fight has only just begun. And, as before, it isn’t about Bernie Sanders—it’s about all of us, and our future.