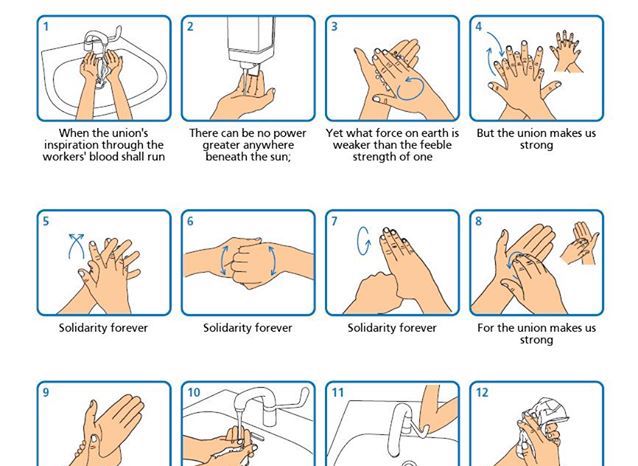 Wash your hands with Solidarity Forever. (Photo by washyourlyrics.com)

30 Socialist Songs and Sayings To Wash Your Hands To

"Your Majesty, please... I don't like to complain, But down here below, we are feeling great pain."—'Yertle the Turtle,' Dr. Seuss

To protect yourself and your family from coronavirus, we suggest socialism, and also handwashing—the Centers for Disease Control recommends you scrub your hands for at least 20 seconds.

If you have nothing to think about, 20 seconds can feel like an eternity. Here are 20-second socialist and revolutionary songs, poems and quotes to get your fighting spirit up.

For the union makes us strong

We shall overcome, some day

Oh, you can't scare me, I'm sticking to the union,

Oh, you can't scare me, I'm sticking to the union,

I'm sticking to the union 'til the day I die.

Barely gettin' by, it's all takin' and no givin'

They just use your mind and you never get the credit

It's enough to drive you crazy if you let it

From the California to the New York island

From the Redwood Forest, to the gulf stream waters

This land was made for you and me

Arise ye wretched of the earth

A better world’s in birth!

As we go marching, marching, we bring the greater days,

No more the drudge and idler, ten that toil where one reposes,

There is power in a factory, power in the land

Power in the hand of the worker

But it all amounts to nothing

If together we don't stand

There is power in a Union

I'm not ready to make nice

I'm not ready to back down

I'm still mad as hell, and I don't have time

It's too late to make it right

I probably wouldn't if I could

'Cause I'm mad as hell

Can't bring myself to do what it is

You think I should

Running with the Wild things / Against the Current / 2016

We got too big for the cage, you locked us up in

Let's mark this down as the day, that we started something

Tearing through the streets

Running with the wild things

if you've marched or agitated, you're bound to hear it said

so you might as well ignore it, or love the word instead

The first ones in line for that pie-in-the-sky

And we're always the last when the cream is shared out

For the worker is working when the fat cat's about

Alive as you and me

Says I “But Joe, you're ten years dead”

“I never died” says he

“I never died” says he

Oh, life was a game, and work was a shame,

And pain was prevented by pleasure.

The world, cold and grey, was so far away

In the distance only money could measure.

But their thoughts were broken by the ringing of revolution.

Do you hear the people sing,

Singing a song of angry men?

Is the music of a people

who will not be slaves again!

When the beating of your heart

Echoes the beating of the drums,

There is a life about to start

I'm a socialist, more than just a theorist

That means I keep it militant, the boss man's nemesis

Rep the organizers, 9 to 5 grinders

I'm a socialist, more than just a theorist

That means I keep it militant, the boss man's nemesis

With silent lips. “Give me your tired, your poor,

The wretched refuse of your teeming shore.

Send these, the homeless, tempest-tossed to me,

I lift my lamp beside the golden door!”

Then again, from below, in the great heavy stack,

Came a groan from that plain little turtle named Mack.

But down here below, we are feeling great pain.

I know, up on top you are seeing great sights,

But down here at the bottom we, too, should have rights.

The land that never has been yet

And yet must be the land where every man is free.

The land that’s mine  the poor man’s, Indian’s, Negro’s, ME

Whose sweat and blood, whose faith and pain,

Whose hand at the foundry, whose plough in the rain,

Must bring back our mighty dream again.

We live in capitalism, its power seems inescapable – but then, so did the divine right of kings. Any human power can be resisted and changed by human beings. … We who live by writing and publishing want and should demand our fair share of the proceeds; but the name of our beautiful reward isn’t profit. Its name is freedom.
– Ursula K Le Guin / 2014

We are socialists because we believe that work must be organized for the collective benefit of those who do the work and create the products, and not for the profit of the bosses. Material resources must be equally distributed among those who create these resources.

All that socialism means to me, to be very frank with you, is democracy with a small 'd.' I believe in democracy, and by democracy, I mean that, to as great an extent as possible, human beings have the right to control their own lives. And that means that you cannot separate the political structure from the economic structure.

To me, what socialism means is to guarantee a basic level of dignity. It's asserting the value of saying that the America we want and the America that we are proud of is one in which all children can access a dignified education. It's one in which no person is too poor to have the medicines they need to live.

With the development of industrial capitalism, a new and unanticipated system of injustice, it is libertarian socialism that has preserved and extended the radical humanist message of the Enlightenment and the classical liberal ideals that were perverted into an ideology to sustain the emerging social order.

No real social change has ever been brought about without a revolution - Revolution is but thought carried into action. Every effort for progress, for enlightenment, for science, for religious, political, and economic liberty, emanates from the minority, and not from the mass.

The Communists disdain to conceal their views and aims.

They openly declare that their ends can be attained only by

the forcible overthrow of all existing social conditions.

Let the ruling classes tremble at a Communistic revolution.

The proletarians have nothing to lose but their chains.

They have a world to win.

Workers of the world, unite!

Lu Zhao is a winter 2020 editorial intern for In These Times. She has written for publications including USA Today, UPI, SupChina, Chicago Reporter and Block Club Chicago.

Let’s Stop the Bailout Fraud Before It Starts