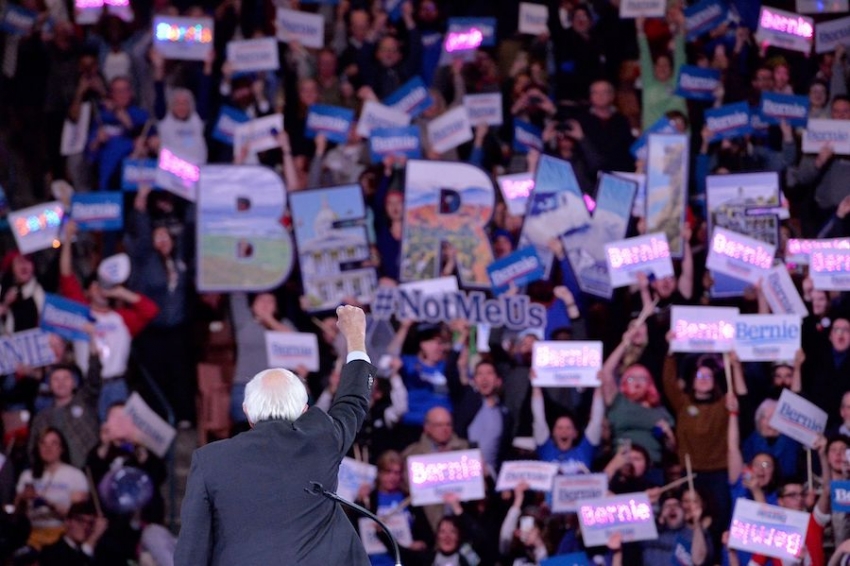 Though Sanders may be out, the political revolution is far from over. (Photo by JOSEPH PREZIOSO/AFP via Getty Images)

Sanders ended his presidential campaign, but he’s laid a path to take on corporate power and win democratic socialism.

As socialists, in the pursuit of an elevated human condition alongside close friends and total strangers, we have discovered a feeling of connectedness to humanity that’s nearly impossible to find elsewhere in our alienated society.

Bernie Sanders is no longer a candidate for president. It's a devastating moment for his supporters and for all those who understand that the status quo in American politics and society is not tenable. But we should pause, in our grief, to reflect on what has come from his campaign. We now have a once-in-a-lifetime opening, pried open by the Sanders campaign and the organizing it helped inspire, to reshape the world for the many, not the few. Given the impending reality of catastrophic climate change, we have no choice but to take advantage of this opening if we don’t want to live out our days in a dystopian nightmare.

Unfortunately, liberals are not taking the threats we face seriously enough. They’ve moved heaven and earth to defeat the Sanders campaign while getting caught up in sideshow spectacles in recent years—Russiagate, impeachment—rather than working to put forward an alternative to the grinding misery of life in America under capitalism. Sanders, meanwhile, showed that we aren’t doomed to live in a world of inequality, oppression and misery—that millions of people really are ready for a critique of the political and economic system we live under, and eager to create a society that’s just, sustainable, and gives everyone a chance to flourish as human beings.

People often quote Werner Sombart’s remark in 1906 about the preponderance of “roast beef and apple pie,” the incredible abundance that the U.S. working class supposedly has access to, as a way to explain why socialism has not taken root here the way that it has elsewhere. Less quoted, however, is the ending of the 1906 book from which that line comes. Sombart, having given his full explanation for socialism’s absence in the U.S., has this to say:

Over a century later, these words ring true. We are in a rare, perhaps brief, moment of political opportunity. Let’s seize it to go beyond the Bernie Sanders campaign and win socialism in our time.

The socialist movement is on stronger footing than it was before Sanders broke into the mainstream, and the crisis of coronavirus has helped popularize many of the kinds of measures socialists have argued for (at least for now). But there are no guarantees that socialism will remain a subject of curiosity or interest for the American working class, much less permeate the political culture. We may in fact have a very short window of opportunity to intervene and grow our movement. It’s our responsibility to take the baton from Sanders and run with it.

Socialists have to take advantage of this opportunity as strategically as possible. The purpose of socialist politics is to build working people’s power. That has to include winning real material victories, but we can’t celebrate those victories for long. Resting on our laurels while capitalism persists is a recipe for the eventual erosion of our accomplishments.

One lesson all those inspired by Sanders should take away is the urgent necessity of a class-struggle approach to political action, both in the state and outside it. Right now, we need more candidates running in class-struggle elections—campaigns that clarify that capitalists are our enemy, raise the expectations of the working class and help build its capacity to fight beyond the electoral realm—and pushing to decommodify basic goods in our lives like healthcare, higher education and housing. We need more protests and strikes, more fights against the tiny minority in the capitalist class that has an active interest in squeezing as much out of everyone else as possible while destroying the planet we all live on, as well as an interest in stoking hatred and division throughout society.

And we need those candidates and those initiatives to all meet under one roof: a socialist organization. Not all of the people who join these fights will be socialists, but with a strong socialist organization, we’ll be able to pull them together to build the kind of working-class strength that can transform the world. The Democratic Socialists of America (DSA) have emerged as exactly such an organization.

DSA members, from Alexandria Ocasio-Cortez and Rashida Tlaib in Congress to half a dozen socialist city council members in Chicago and beyond, have already won elections up and down the ballot, not to mention playing key roles in the Sanders campaign; the group has been organizing in the streets on a wide range of issues, including Medicare for All, affordable housing, immigrants rights, union organizing and support, and much more. For those who want to continue fighting for the “political revolution” that Sanders put on the map, there’s no better group to do it with than DSA.

A Struggle, Not a Slog

We each have one life to live. We should spend it free and happy. To maintain a system that renders people miserable and unfree, for no other reason than the accrual of a huge amount of profits to a small number of people, is a crime.

We deserve the world. And we won’t have it until capitalism ends.

It’s daunting, this idea that socialists must keep struggling through conditions unforeseen, possibly for the rest of our lives. But it’s not a slog. In fact, that struggle is meaningful and nourishing. And in the pursuit of an elevated human condition alongside close friends and total strangers, we have discovered a feeling of connectedness to humanity that’s nearly impossible to find elsewhere in our alienated society.

To be a socialist, engaged in this perpetual struggle, entails many frustrations and some personal sacrifice. But it is also enlivening, enriching and inspiring. At times it can feel downright spiritual. In a speech delivered in Canton, Ohio, the one that landed him in jail, labor organizer and five-time Socialist presidential candidate Eugene V. Debs captured this sentiment beautifully:

I have regretted a thousand times that I can do so little for the movement that has done so much for me. The little that I am, the little that I am hoping to be, I owe to the Socialist movement. It has given me my ideas and ideals; my principles and convictions, and I would not exchange one of them for all of Rockefeller’s bloodstained dollars.

It has taught me how to serve—a lesson to me of priceless value. It has taught me the ecstasy in the handclasp of a comrade. It has enabled me to hold high communion with you, and made it possible for me to take my place side by side with you in the great struggle for the better day; to multiply myself over and over again, to thrill with a fresh-born manhood; to feel life truly worthwhile; to open new avenues of vision; to spread out glorious vistas; to know that I am kin to all that throbs; to be class-conscious, and to realize that, regardless of nationality, race, creed, color or sex, every man, every woman who toils, who renders useful service, every member of the working class without an exception, is my comrade, my brother and sister—and that to serve them and their cause is the highest duty of my life.

What Bernie Sanders has accomplished in the last five years can’t be overstated. He has invited hundreds of thousands, perhaps eventually millions of people to join in the fight for a humane and free world, and to come to know through their own actions the meaning of solidarity.

It’s now the task of the reborn socialist movement to act boldly, intervene intelligently, and continue to invite people into that struggle, so that the potential of this moment isn’t squandered. There has not been a better time to be a socialist in the United States in the last century.

There hasn’t been a more urgent time to join the socialist movement, either. So join us.

Adapted from Bigger than Bernie: How We Go from the Sanders Campaign to Democratic Socialism by Meagan Day and Micah Uetricht, from Verso Books. Views expressed are the authors’. As a 501(c)3 nonprofit, In These Times does not support or oppose candidates for political office.