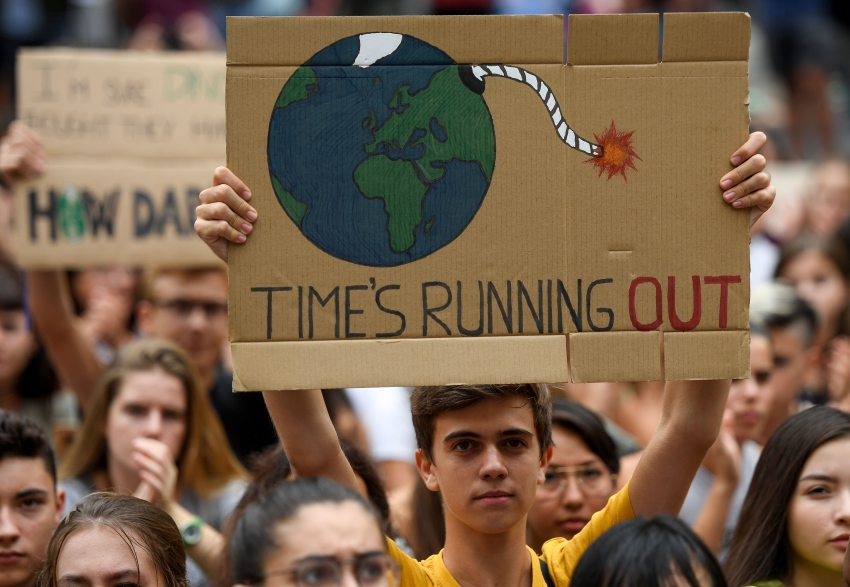 A demonstrator holds a placard reading "time is running out" during a global youth climate action strike in Barcelona, on September 27, 2019 at the end of a global climate change week. (Photo by JOSEP LAGO/AFP via Getty Images)

The Last Stimulus Ignored Climate. Activists Are Determined That Won’t Happen in the Next One.

Bruised from the CARES Act, environmental organizations are planning next steps.

Though climate advocates failed to win green demands in Stimulus 3, many are looking ahead to future stimulus packages, where they believe they could be more successful.

With Congress planning to reconvene later this month to hash out another coronavirus stimulus bill, climate activists have begun discussing how they might assert themselves more successfully into the next federal package.

Progressive climate advocates tried to shape the debate leading up to the $2 trillion Coronavirus Aid, Relief, and Economic Security (CARES) Act signed into law on March 27. A few days before the president signed it, dozens of climate groups, including 350.org, Sunrise Movement and the BlueGreen Alliance, joined in coalition with hundreds of left-leaning organizations in releasing “Five Principles for Just Covid-19 Relief and Stimulus.” The fourth of these five principles called for creating good jobs while tackling “the climate crisis that is compounding threats to our economy and health.” Their demands—grouped under the banner of a “People’s Bailout”—included new federal investments in rebuilding the nation’s infrastructure, expanding wind and solar, and restoring wetlands and forests. The organizations also called for requirements that industries reduce their climate emissions and pollution in exchange for aid.

Soon after, a coalition of scientists, academics and wonks released a “Green Stimulus to Rebuild Our Economy”—a detailed “policy menu” that lays out specific climate and inequality-conscious ways to spend new federal investment. The ideas draw from proposals put forward from nine Democratic presidential candidates, including Jay Inslee, Bernie Sanders and Elizabeth Warren. “Most of the physical work proposed here cannot begin immediately,” their letter acknowledges. “We must focus on halting the spread of deadly illness. However, we can do all the preparatory work now to make green projects ‘shovel ready.’”

Daniel Aldana Cohen, a University of Pennsylvania sociology professor and one of the 11 co-authors of the Green Stimulus, told In These Times that many of the drafters were influenced by Naomi Klein’s 2007 book, The Shock Doctrine, which centers on how leaders often exploit national crises to advance destructive policies when citizens are too distracted to fight back.

“During a crisis people turn to ideas lying around, and the oil CEOs are not waiting for the virus to stop before pushing their ideas,” Aldana Cohen said. “We knew we had to get something out more quickly.” Their thinking was maybe their climate proposals would influence discussions around the CARES Act, also known as “Stimulus 3”—but more likely their proposals could help influence subsequent stimulus packages that lawmakers have signaled they plan to negotiate. Knowing that it can take much longer for organizations to sign on to detailed policy agendas (rather than to broad principles), Aldana Cohen said Green Stimulus authors sought to “mobilize as wonks” and then invite climate leaders to sign on as individuals.

Stimulus 3 ended up being tough for climate advocates, not only because they emerged winning none of their more visionary demands, but also because Republicans attacked them for politicizing the crisis and stalling relief.

A central fight ended up being over whether Congress should require airlines to cut their emissions to 50% below 2005 levels by 2050 in exchange for billions in rescue aid. The airline industry has committed to this target voluntarily, but climate advocates want it stipulated in law.

Such legally-mandated conditions have precedent. During the 2008 auto industry bailout, General Motors and Chrysler had to accept new fuel-efficiency standards in exchange for federal aid. But lawmakers in late March said they wanted to focus on getting immediate relief out to workers, hospitals, and businesses—and publicly charged climate advocates with derailing that effort.

“[Democrats] are holding up voting for this emergency bill to help the American people in terms of the economy and in terms of our health care over solar panels and wind turbines, a green new deal about airline emissions,” said Republican Senator John Barrasso in a speech on the floor.

“Democrats won't let us fund hospitals or save small businesses unless they get to dust off the Green New Deal,” accused Republican Senate Majority Leader Mitch McConnell.

Democrats countered by pointing to Senate Republicans who, in the midst of negotiations, inserted a $3 billion provision for the Strategic Petroleum Reserve, which are federally-owned oil stocks stored underground along the coastline of the Gulf of Mexico. After this, climate advocates ramped up pressure for aid to clean energy industries, Melinda Pierce, the legislative director for the Sierra Club, told In These Times.

In the end, the $3 billion for the oil industry was scrapped, as were tax breaks for wind and solar, and demands for airline emission reductions. Climate advocates were left bruised from the fight.

“The airline conversation ended up being a debate about [carbon] offsets which is not the terrain that Green New Deal advocates want to be fighting on,” said Aldana Cohen, who urged for more focus around job creation and job protections. “We should be focusing on investments that lift up workers and communities,” he said.

Pierce said she and other climate advocates understood their demands for clean energy aid “were outside the scope of what leadership thought consisted emergency relief” and that enviros had originally been “very much aligned” with the idea that Stimulus 3 should focus primarily on swift aid to workers, families, healthcare and frontline businesses.

“Yet when the oil industry tried to inject $3 billion to fill the Strategic Petroleum Reserve, we were activated beyond those goal about workers to make sure [lawmakers] weren’t providing corporate bailouts,” she said, noting enviros also fought for accountability for billions granted to the Federal Reserve for corporate assistance. “We were fighting those battles because oil and gas were bellying up to the bar to their cronies in Congress,” Pierce said.

While some Congressional Democrats touted the accountability measures they managed to win, Lukas Ross, a senior policy analyst with Friends of the Earth, said the end result was a disaster.

“The guardrails for workers and communities are weak, and the guardrails for climate are nonexistent,” he said. “As a result of the stimulus bill we are all entering an even stranger and more frightening world.” Ross specifically noted how the new federal aid could potentially give cash-strapped drillers a fresh injection of subsidized credit.

Though climate advocates failed to win green demands in Stimulus 3, many are looking ahead to future stimulus packages, where they believe they could be more successful. President Trump and House Speaker Pelosi initially indicated the next bill could focus on infrastructure investment, though more recently Pelosi has walked that back.

On March 31, four days after signing the CARES Act, President Trump tweeted that, “With interest rates for the United States being at ZERO, this is the time to do our decades long awaited Infrastructure Bill. It should be VERY BIG & BOLD, Two Trillion Dollars, and be focused solely on jobs and rebuilding the once great infrastructure of our Country! Phase 4.”

The following day, Pelosi proposed reviving House Democrats’ $760 billion infrastructure bill released in January, which would include new investments in things like rail, transit, and broadband. However just two days later she signaled she had changed her mind, and maybe infrastructure should not be Democrats’ next priority. “I’m very much in favor of doing some of the things that we need to do to meet the needs of clean water, more broadband, and the rest of that,” she said on April 3. “That may have to be for a bill beyond this.”

Ross of Friends of the Earth thinks climate advocates should be careful in how they move forward, and focus their efforts on securing aid for people and preventing bailouts for polluters. “The question isn’t how to invest in climate, the question is how to invest in workers and a more resilient society,” he said. “That certainly has implications for climate, but at this moment of unprecedented immediate suffering, it likely shouldn’t be first on anyone’s mind.”

Pierce of the Sierra Club said if polluting industries need more federal aid in subsequent stimulus packages, they will continue to push for conditions. “We fully expect the airline industry is going to need an additional tranche of support and if we’re funneling tax dollars, we truly believe we should be funneling tax dollars in a way that is building industry of the future,” she said.

How intently climate advocates should push a “Green New Deal” remains in dispute, as the phrase itself has become deeply polarizing in Congress, even though the specific ideas undergirding it are broadly popular.

Aldana Cohen said he and his collaborators deliberately opted for “Green Stimulus” over “Green New Deal.” He pointed to Data for Progress polling showing Republican support for Green New Deal-like ideas when they’re not labeled as such.

“I think our view is you don’t want to have the vocabulary prejudge an argument that you believe you otherwise win,” he said. “You want to go in and focus on the substance.”

Not all Green New Deal supporters are ready to scale back on the slogan, with some saying now is precisely the time to elevate it, and resist the GOP’s bad-faith mischaracterizations.

“This is a pivotal moment to grapple with the fact that our economy was not working well and was not resilient in the face of crisis,” said Lauren Maunus, the legislative manager for Sunrise Movement. “Republicans are using the Green New Deal as a wedge issue and villainizing it, and it’s our utmost priority to clarify that the Green New Deal has always been about a plan to fight economic inequality and create millions of good family-sustaining jobs to put our country on a path to a safer, and healthier future.”