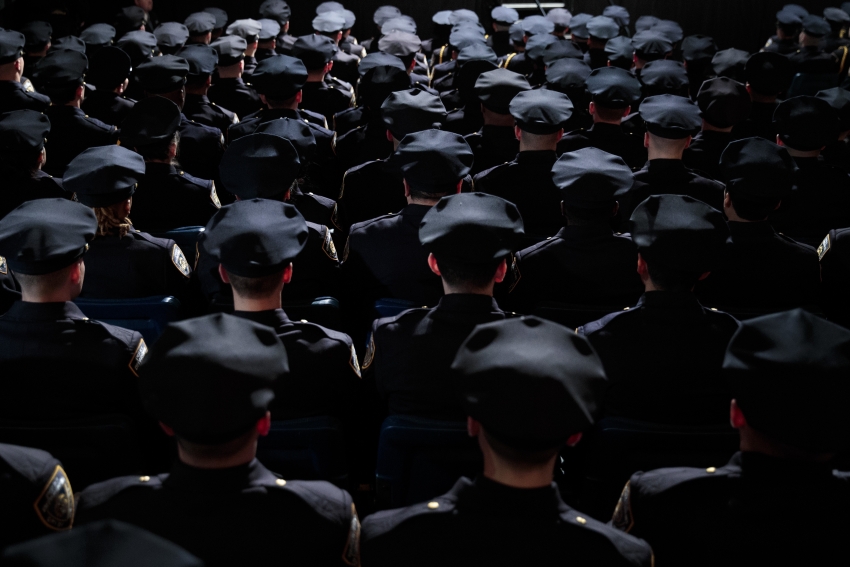 Cities across the country have defied demands from protesters to defund police despite facing huge budget deficits from Covid-19.

The expansion of the security state, as the welfare state shrivels, is the product of decades of policy.

Faced with mass teacher layoffs, deep cuts to education and social services, and a looming eviction crisis, police budgets across the nation remain absurdly high and have been largely insulated from Covid-induced belt-tightening. Worse yet, a number cities have opted to increase police budgets, claiming the funds are needed to pay for reforms. This is despite the fact that racial justice protesters across the country are clearly calling for the defunding of police—a demand that stems from abolitionist principles. Budget cuts are seen as part of a process of dismantling prisons and policing while investing in community alternatives and social goods, in order to reimagine public safety.

In Phoenix where activists demanded a 25% cut in the police budget, the city voted on a $24 million increase to the department for the upcoming fiscal year, even as the city anticipates a $26 million budget deficit over the same period. The Phoenix Police Department’s $592 million annual budget will account for over 40% of the city’s discretionary funds, with $3 million going to a new police oversight agency. Rejecting residents’ calls to cut police spending, San Diego increased its annual police budget by $27 million to $566 million. The department will account for about a third of the city’s general fund and will create a new Office of Race and Equity. In Louisville, Ky., where Breonna Taylor was shot by police in her bed after officers enforced a no-knock warrant, the city has decided to increase the annual police budget by three-quarters of a million dollars, while claiming to funnel resources into reforms like a civilian review board. The decision followed demands to cut $100 million from law enforcement and reinvest in social services. Meanwhile, the Louisville City School District has approved $1.35 million in cuts to education and has already laid off 32 employees. Similarly, Atlanta increased its police budget by $14 million as Georgia cut over $1 billion in education and 4% of the state’s healthcare budget. Houston, Kansas City, Nashville and Tulsa have also increased funding to police in the upcoming year’s city budgets.

Tracey Corder, the campaign coordinator on policing work at the Action Center on Race and the Economy, is not pleased with this trend. “We know that budgets are moral documents. They reflect priorities,” says Corder. “I think it is not only backwards, but it’s also a little cowardly, if we’re being honest, to take this moment and decide that we are going to invest in more policing and not in the real things that communities are calling for that we know actually make people safe.”

On average, roughly a third of city and town general funds, which are discretionary and largely made up of property taxes, are devoted to police departments, which often account for the largest budget item, according to an analysis by Sludge. In cities like Oakland, Calif. and Milwaukee, Wis., police budgets are closer to 45%. Globally, the United States spends $115 billion on police annually, a number that is greater than Saudi Arabia’s entire annual defense budget.

Education budgets have not fared as well. Since the start of the pandemic, “education jobs have accounted for nearly two-thirds of the decline in state and local government employment,” according to an analysis by Pew Research Center. The National Education Association warns that without additional federal funding, “the country is projected to lose 1.9 million education jobs—approximately one-fifth of the workforce that powers public schools and public colleges and universities.” Higher education, which is dependent on tuition for funding, still has not recovered from the Great Recession, and now faces lost revenue from both fewer enrollments and less public funding. We face the prospect of hundreds of colleges and universities closing permanently.

These cuts extend beyond education. Public services—from healthcare to social security to affordable housing—are bearing the brunt of austerity measures while over 20 million renters are at risk of eviction by the end of September, with millions more newly unemployed and without insurance. With a federal government relinquishing its responsibilities to ensure basic state functions like public health, education or fair elections, many have asked whether the United States has turned into a failed state.

The expansion of the security state, as the welfare state shrivels, is the product of decades of policy. Over the last 50 years, with the war on crime and the rise of law-and-order policies, police budgets have risen considerably even as cities grew safer, with experts saying they found no correlation between police spending and crime rates. High police budgets correspond with cities that are highly segregated and have large Black populations; poorer cities tend to dedicate a higher share of their budgets on police independent of crime rates, according to a Sludge analysis.

One thing we can take away from the 2008 recession is that budget cuts and layoffs will disproportionately affect public education. In the decade that followed the Great Recession, median per capita spending on police dropped and then rose even as median per capita spending on housing and community development, public welfare and education fell in the 150 largest U.S. cities. Social services still have not recovered to their pre-recession levels.

Police budget cuts have mainly been the result of sustained and overwhelming grassroots pressure to defund police and invest in communities. However, even in a number of cities that have announced cuts to police departments, budgets will remain the same or even increase. News outlets recently claimed Washington, D.C. “cut,” “defunded,” “stripped,” “slashed” the police budget by $15 million—but it’s still an additional $3 million in funding from the year before, an amount that slightly exceeds inflation. In Los Angeles and Philadelphia, defunding the police meant cancelling proposed increases, essentially keeping the budget untouched.

Even “cuts” do not defund the police

Even where activists have managed to win concessions on budgetary cuts, there is still a long road ahead to realizing large-scale divestment from policing. The $1 billion cut New York City recently approved to its nearly $6 billion police budget, upon further inspection, was deemed to be the result of what Rep. Alexandria Ocasio-Cortez called “funny math” and the New York Times referred to as a “budgetary sleight of hand.” Over $300 million worth of “cuts” were accounted for by moving school safety officers from the NYPD budget to the New York City Department of Education despite demands from students and organizers to remove cops from schools entirely. The school safety program will remain part of the NYPD until next year and receive a 2% increase in funding. In addition, $134 million in fringe benefits associated with school safety officers is being counted towards the $1 billion figure, so it’s closer to $866 million.

New York City’s other budget cuts include $65 million from a program that subsidizes public transit to low-income New Yorkers, a 40% reduction in funding for affordable housing, a nearly 70% cut in arts education, $182 million from the Department of Education, and $20 million from the City University of New York, where 2,800 adjunct professors and part-time staff members have already been laid off. Hiring freezes have been imposed on teachers and a number of agencies across the city, excluding police. At the state level, Gov. Andrew Cuomo cut $1.1 billion—the exact amount received from the CARES Act—to K-12 education.

Though the NYPD represents less than 6% of the city’s budget, the department is notorious for its racism and brutality through programs like “stop and frisk,” as well as the targeting and surveillance of Muslim New Yorkers. Additionally, Rikers Island has become synonymous with the worst excesses of the carceral state. Despite this reality, the city spends an average of $337,524 per incarcerated person at Rikers annually while spending around $30,000 per student. As one of the wealthiest cities in the world, the problem here is not funding, but priorities.

That elected officials have to be fought tooth and nail to fund social goods while police departments remain largely shielded from the financial crises that are tearing apart our social safety net is a testament to a state that has chosen warfare over welfare.

Indigo Olivier is a 2020-2021 Leonard C. Goodman Institute for Investigative Reporting fellow with In These Times.