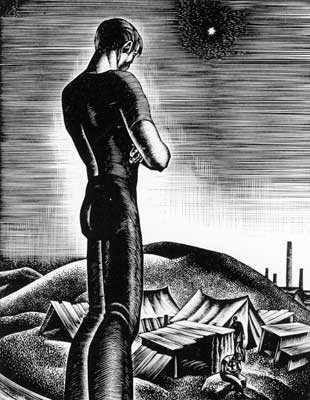 Lynd Ward used to joke that he was destined to be an artist because his last name spelled “draw” backwards–a curious statement from a man whose contributions to the visual arts deliberately repudiated words. Now recognized as one of the founders of the American graphic novel, Ward used to be better known as a fixture of progressive cultural politics in Depression-era New York City. In this, the centenary of his birth, Ward’s fans are celebrating both his visual innovations and the passion for social justice that suffused his silent novels.

Ward inherited his political worldview from his father, the radical minister Harry F. Ward, who worked in Chicago’s settlement house movement at the turn of the century and helped found the ACLU in 1920. He also wrote and preached about the virtues of the U.S.S.R. as the embodiment of Christ’s teachings on Earth, long after the Soviet experiment’s vices had become apparent. Ward, though, was no red-diaper baby. The family home was littered with Methodist sermons, not social manifestoes, and it was ascetic Protestantism rather than Marxist discipline that forbade Ward to do anything but sketch during Sunday afternoons.

If Ward’s political outlook was Midwestern radicalism, European expressionism was his artistic vision. Like so many art students of his time, he dutifully set off for a year in Europe, fortunately spending 1927 not in the cafes of Paris, but in Leipzig, which swirled with a long tradition of German printmaking and the recent blossoming of Weimar cultural politics. Ward, who possessed only a few words of phrasebook German, may have been particularly attuned to the possibilities of visual communication in the work of radical printmakers such as Käthe Kollwitz and the Belgian artist Frans Masereel, who crafted the first wordless novels.

Returning to the United States, Ward published Gods’ Man (1929), the first woodcut novel in the United States. The book’s subject matter–an allegorical fable about an artist who sells his soul for worldly success–was timeless. But its artistic innovations were unprecedented; its visual structure and pacing owed as much to silent film and mass-circulation comic pages as they did to artistic predecessors like Kollwitz or Honoré Daumier. Wordless novels were political interventions, too, meant to take advantage of what Ward called the “great asset of the book’s thousandfold duplication of contact with people.” Ward wanted to get art out of stuffy museums and snooty galleries and into the hands of an international community of readers who shared the language of images.

Gods’ Man appeared in bookstores the week of the 1929 stock market crash. As the Depression settled in New York City, Ward’s vision grew increasingly more engaged; his work tackled unemployment, poverty and exploitation. In Madman’s Drum (1930), Wild Pilgrimage (1932) and Vertigo (1937), his political vision grew more forthright. Even while cushioned from financial crisis by his family, Ward labored to organize artists politically. He founded the Equinox Cooperative Press, an illustrators’ collaborative dedicated to noncommercial work, and the American Artists Union. In addition to convening artists’ congresses, Ward later helped shepherd the group into the CIO.

As the New York art world swirled with political controversy in the ’30s, Ward steered a middle course between the rigidity of Communism and the apathy of art for art’s sake. “t was impossible,” he recalled, “for anyone, artist or not, to remain ignorant of the fact that the world was in trouble.” A quintessential fellow traveler, he joined one organization after another, signing every social justice petition that came along, devoted more to the urgency of an issue than the orthodoxy of an ideology. But, he lamented, “every dose of medicine seemed only to aggravate the situation.” His moderation showed too in his work. Ward–ever the wood engraver–patiently carved out his vision while fellow artists like William Gropper pounded tables with fists, demanding that art serve the revolution. In an age of agitprop and socialist realism, he never turned his vision into a cartoon.

The Cold War, though, would cast a dismal shadow over the art world. The romance surrounding ’50s Abstract Expressionism still obscures how ruthlessly the politically engaged artists of the Depression era were silenced–an effort the art world participated in with the vigor of a Congressional committee. Many artists found it nearly impossible to earn commissions or secure gallery spaces. Senator Joseph McCarthy summoned some artists, among them Ward’s old ally William Gropper, to Washington.

As pages piled up in his FBI file, Ward turned away from explicitly political art. But a closer look suggests that Ward had not abandoned his commitment to social justice. In the popular children’s novel Johnny Tremain (1943), Ward, in collaboration with the book’s author Esther Forbes, told he story of the American Revolution as a populist narrative at the height of the Cold War. Readers may be tempted to read just a bit much into the redness of The Little Red Lighthouse and the Great Gray Bridge, one of Ward’s most beloved works. For once, they might be right.

Recent years have restored Ward’s reputation, turning him into a patron saint of illustrators and graphic novelists. Ward’s admirers include Will Eisner, who has credited Ward for establishing a “historical precedent for modern graphic storytelling,” and Eric Drooker, whose 1992 work Flood!, helped usher graphic novels into the mainstream of American literature. But Lynd Ward’s work was never really lost: A young Allen Ginsberg pulled Gods’ Man from his family’s bookshelf, and in 1955 transformed the book’s images into his epic Howl. Even when Ward himself was silenced, his images continued to speak a thousand words.