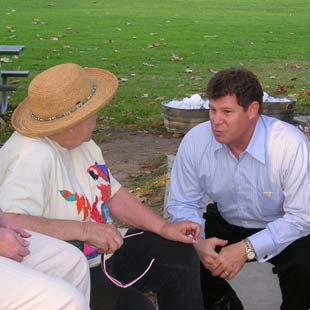 The inside/outside strategy of the Progressive Democrats of America

The endorsement of Steve Young for representative of California’s 48th district by the Progressive Democrats of America (PDA), like his campaign, happened quickly.

His was the first endorsement by the nearly year-and-a-half-old organization, and came at the end of the group’s first “Grassroots Strategy Day,” held on the Sunday after the September 24 peace march in Washington, D.C.

Formed in July 2004, PDA is a national progressive political organization that operates as a federal Political Action Committee–meaning they work directly with federal electoral campaigns, and face strict restrictions on contributions. The group’s key staffers came from Dennis Kucinich’s presidential campaign, and it counts amongst its allies Howard Dean’s Democracy for America.

At the September meeting, PDA members discussed an electoral strategy of endorsing candidates both strategically and with the support of local chapters, electing secretaries of states to ensure electoral reform and bringing the antiwar fight to the 2006 primary.

PDA hopes to combine grassroots energy with a clear progressive agenda–their “inside/outside strategy”–to transform the Democratic Party. In a July report to PDA members, National Director Tim Carpenter described the strategy this way: “Heat in the streets, media campaigns, demonstrations, petitions, and other shows of public intent are linked to decision-makers on the inside.” Their first prominent national campaign was the challenge to the Ohio vote count, during which they worked with both the Green Party and the NAACP. In January they held a “Counter-Inaugural Summit” in D.C., with a keynote speech by Rev. Jesse Jackson, Jr. The group has since worked to promote the antiwar movement and firm up an electoral strategy for 2006.

Young’s endorsement is part of the group’s commitment to the grassroots. “We agreed when we launched that we would be grassroots,” says Kevin Spidel, the national deputy director. “You see other organizations making strategic decisions without the local chapters, and we’ve seen activists come over to PDA because of that.” The group has 15 chapters in California, and Young’s endorsement came at the request of those chapters. “One of our beliefs is to grow our activists and support whatever they want to do in the progressive political world,” says Spidel.

Young, an attorney specializing in employment law, became involved with PDA after a fundraiser the group held in Laguna Beach in July. “Steve said he was interested in the work being done, expressed interest in progressive politics,” says Marion Pack, Young’s field director. “He jumped in with both feet to the race for the 48th congressional seat.”

Young is running for the House seat vacated in August by Republican Christopher Cox when President Bush appointed Cox chair of the Securities and Exchange Commission. Cox had held the seat in Orange County’s largely Republican 48th district for 17 years. The special election was an open primary, with the top vote-getter from each party moving on to an election on December 6.

Young was the winner among Democrats in the October 4 special primary, but that isn’t saying much. Of the 17 candidates in the primary, he finished fourth, with 8.7 percent of the vote. Young faces an uphill battle; not only was he beaten out by two Republicans, but also by the American Independent Party’s Jim Gilchrist, who came in third with 14.7 percent of the vote. Gilchrist is the founder of the Minuteman Project, the vigilante group that organizes volunteers to patrol the U.S.-Mexico border for illegal immigrants.

At this point, PDA can offer Young and future endorsees its base of activists and its national profile. Pack says she knows at least three dedicated volunteers who joined Young’s campaign after the PDA endorsement, and the entire PDA phone list was called for donations and support. Regardless of the outcome of this race, Pack takes the long view. “I think a lot more people will remain active,” she says. “Steve is building a base right now; it will carry over to the next elections. [Because this is a special election] whoever is elected is going to face re-election in a year–if we don’t win it this time, we’ll go at it again. It’s winnable. And we’re going after it to win.”

It remains to be seen how PDA will strike a balance between supporting more winnable campaigns and those that rise up from the grassroots. Young’s campaign is particularly fraught: In 2004, 58 percent of voters in the 48th district chose Bush, and liberal senator Barbara Boxer also lost there by 8 percentage points. In contrast, PDA’s second endorsement is going to progressive radio host Tony Trupiano, who recently announced his candidacy for Michigan’s 11th congressional district seat. And while the 11th district is arguably a winnable race–both counties in the district went for Kerry in 2004–the grassroots connection isn’t as clear because PDA’s presence in Michigan is still forming.

“I wouldn’t call it a problem,” says Spidel. “I would call it a situation we have to address.”