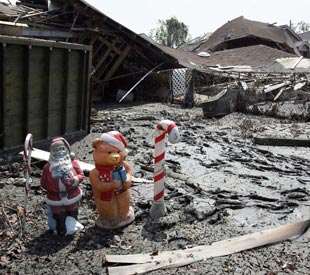 Picture Santa’s sled with a rolling kitchenette attached and you have some idea about the size of a FEMA trailer. I came across a yard of them when I got lost on the highway near Baton Rouge, where most of my family evacuated out of New Orleans.

The trailers are not the double-wides I imagined–but some are festooned with lights and an artificial Christmas tree outside the door as in a Bobbie Ann Mason short story. A FEMA trailer is more like a camper that you’d attach with a hitch to your four-wheeler when you want to get out of the city for the weekend. Tiny, but nonetheless a gift.

As the rest of the country, children and adults alike, envision Christmas with piles of presents from their favorite electronic and clothing stores, the people of the Katrina diaspora are waking up daily with thoughts of clean underwear, one comfortable chair and not being home for the holidays. But they are trying to make it.

In the town of Baker, the trailers sit row after incalculable row on a dusty field isolated from the sleepy community. Baker is a town where Main Street sits along the railroad tracks and leads from the interstate past the chemical plant and the playground to the church and two roads named Magnolia. An estimated 1,700 people live on the Baker plain. It is a good mile from any shopping or familiar community life. The FEMA park is named Renaissance Village, for the RVs as much as the hopes of their occupants.

Other evacuees stay in temporary apartments and pile into houses around Baton Rouge. One of my cousins hosted 70 people in her home in the days after the hurricane.

Now, life means close quarters, small irritations and long hugs with too many memories of home. Evacuees send e-mails to each other with Christmas poetry wistful for beignets, king cakes and burgers at Port of Call. People who lived for their front porches and pecan trees are getting used to seeing a clear, cold night sky.

Like children making their wish lists to Santa, the evacuees are hoping hard and wondering if they will ever regain shelter, sanity and a decent future.

The Christmas commerce that exists in the welcoming malls of the North is a harsh contrast to the stores and hotels of New Orleans, that were boarded up for protection and to keep out Katrina’s homeless. People joke about spending food stamps on Christmas candy or presents or seafood for gumbo, and the reasons not to hoard instant noodles and canned goods. The suddenly indigent now recognize the delicate balance between entitlement and nutrition.

The jokes these days are edgy. Once voting for governor was a choice between the Klansman and the Crook. (Vote for the Crook, my folks advised everyone.) Now, the joke is “Where’s Waldo?,” with bank officers and city and government officials hard to find.

Best friends and neighbors whose family connections extend for generations now meet fleetingly before traveling to jobs in one city or another. Relatives lose precious phone numbers and castigate themselves for doing everything wrong. Those who escaped Katrina have not escaped worry and longing.

Going home for the holidays are mostly the elderly and infirm. Their homecomings take place in downtown New Orleans at one of the three St. Louis cemeteries, which hold some of the city’s most permanent residents.

Still, the survivors talk openly to strangers in crowded meeting halls. People with dedication and sympathetic hearts are working and planning. As in New Orleans’ early days, crooks and futurists are finding commonalities in notions of a new frontier. Individuals are washing their houses by cup and spoon. They are teaching their children that kindness is sharing a bottle of water and self-sufficiency is keeping some.

When the nation emerges from its pile of gifts on Christmas morning and picks up the newspaper or moves to the television, will Americans still attend to the people of New Orleans? Or will Katrina’s poor folk move back toward the invisibility where they existed for so many years? The people of south Louisiana may accept their lot or maybe disappointments will fester. Let us hope that they bear no bitterness if America moves on.

In poor Louisiana, the community of Katrina survivors is looking for miracles. At this time of the year, they are finding a parallel to their tragedy and hardship from long ago: There was no room at the inn for the first Christmas and few places to rest their heads now for the people of New Orleans.