Selling Off New Orleans: Gentrification and the Loss of Community 10 Years After Katrina

How long-time residents feel about the new Louisiana purchase 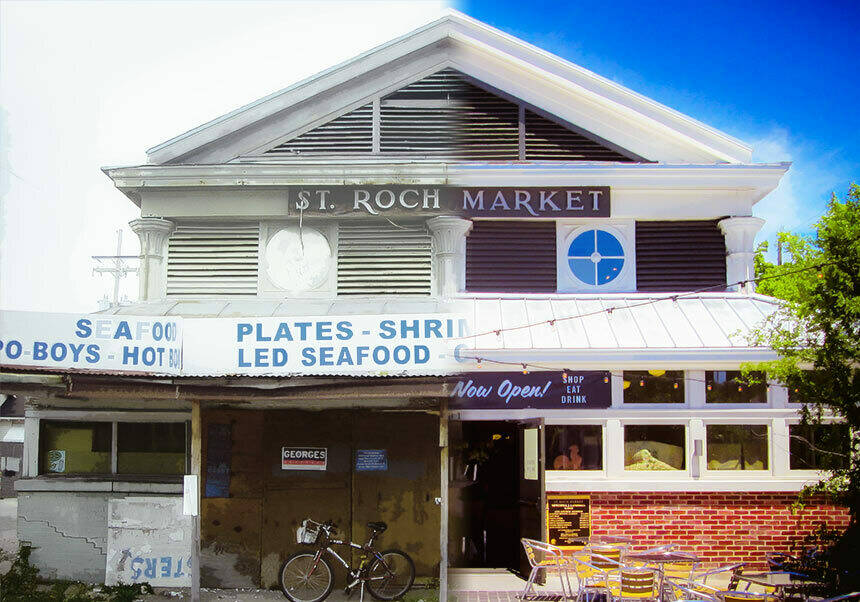 When native New Orlea­ni­ans talk, the top­ic inevitably turns to con­flicts with the new migrants. Before Hur­ri­cane Kat­ri­na hit 10 years ago, on August 29, 2005, New Orleans’s old neigh­bor­hoods saw lit­tle turnover. My own fam­i­ly has lived in the 7th Ward and Tremé/Lafitte for three gen­er­a­tions down one line and at least four down the oth­er (maybe more, thanks to a Native Amer­i­can ances­tor who may have been Choctaw). And for more than a cen­tu­ry, we natives have passed down cau­tion­ary tales of strangers.

New Orleans has always had an ebb and flow of newcomers. Besides the Native Americans, African tribesmen, French and Spanish were Haitians, Cubans, Germans, Irish, Italians and Asians—just in the 19th century.

New Orleans’s Creoles date the end of civilized living to the invasion of “the Americans”—that is, Anglo whites—in the early 1800s. Like everything else in Louisiana, which at one time proclaimed itself the Dream State on its license plates, the stories of foreign takeover are both real and imagined. The truth is complicated: Some people fought the invaders. Some people cooperated. Some people lost everything. Some people profited. And so it is today.

As longtime residents searched for places to live, cobbled together family from decimated kinship structures and retook their communities from flooded blocks, the wounds of Katrina had barely scabbed over when another assault began.

All things new, successful and moneyed now seem to be falling into the hands of people who did not experience the suffering of the hurricane or the oppressive poverty before the storm, yet stand to profit from both. Local newspaper stories and their hundreds of commenters debate gentrification while community leaders discuss the “fauxbourgs”—a play on “faubourg,” the local word for neighborhood—that have sprung up as developers, entrepreneurs, business leaders and careerists move full steam ahead.

The end, or the beginning?

New Orleans is more educated, better-heeled and whiter than before. Among the nearly 182,000 households that received mail in 2014 in Orleans Parish—the 169 square miles of solid ground that is New Orleans—blacks outnumber whites 2 to 1, rather than 3 to 1 before. Rents are rising, pushing out long-time residents. It would be simple to see the current situation as garden-variety gentrification, but it is more.

In what realtors have dubbed New Marigny—an old downtown neighborhood of the poor and black adjacent to the un-flooded, upscale Faubourge Marigny—a battle is raging at the intersection of color, commerce and culture. To the locals it is St. Roch, a community once anchored by a fresh seafood and vegetable market that stood in a long, enclosed shed-like building. It was the place where grandparents and great-grandparents taught youngsters to smell the ripeness in a cantaloupe, look for the clarity in the eye of a trout and suck down a raw oys- ter before buying the sack. The locals yearned for its return and felt betrayed when it finally reopened in April with chic vendors of specialty foods—an emporium of boutique spirits, nouveau muffins and exotic coffee—no food stamps accepted. About 40 square feet of local vegetables remain.

People lost so much during the storm. Houses were just the bow of this sinking ship. Friends, family, churches, social organizations and other generational bonds unraveled. Resurrecting this network was hard, slow work.

Breaking people’s hearts now is the sale of small, owner-built homes and vacant land to commercial enterprises that care little for the way things were.

In the lower 9th, in an area called Holy Cross, a high-rise development is going up despite public opposition. The area was rezoned. The new apartments promise to bring a more solid tax base and richer citizens with no historical memory.

Yes, the city needs the money, but the emotional pain is real. The sun, blocked by a new high rise, will not hit the tomato plants. The dogs will suffer depression from being tied up. The wild rabbits and common-law watermelon patches will disappear.

An economist in a pin-striped shirt with shiny cufflinks and suit pants told me, as we sat in a neighborhood chicken shack, that a worse future for the city would be continuing unemployment. Statistics released in July by the New Orleans Urban League show that only 48 percent of the city’s black men have jobs. Between 2005 and 2013, median incomes for white households rose from $49,000 to $60,500, but only from $23,300 to $25,100 for black households.

No argument here. But it still seems strange that the new cashier in my local hood joint is a young, pale-skinned blonde. The economist was black. The change ain’t a comin’. It’s a here. Maybe this is good.

Along with the cold-hearted capitalists come youthful migrants and familial returnees—the children and grandchildren of the people who evacuated. Having experienced none of the old segregated New Orleans, they are open, optimistic and naïve. Locals who stuck out the storm find comfort in the familiar surnames of the white or black returnees. Newcomers are fascinated by New Orleanians’ acceptance of human variety. In the St. Roch Market, for example, an interracial couple sell Korean-fusion-Creole food. The tables are full.

The economist reminded me that New Orleans has always had an ebb and flow of newcomers. Besides the Native Americans, African tribesmen, French and Spanish were Haitians, Cubans, Germans, Irish, Italians and Asians—just in the 19th century. I knew this because my own ancestors branch from all but two of those ethnicities. Still, during segregation, we were Negroes. Will the new New Orleans end prejudice or create a new brand?

On July 3, in the still-impoverished 7th Ward, storm survivors gathered at the city’s oldest black-owned bookseller, the Community Book Center. The bookstore was holding Homefest, a reaction against the annual Essence Music Festival, which in 2012 removed the Community Book Center as the sole book vendor. They were there to discuss the memoir Twelve Years a Slave, but instead, they discussed the new New Orleans.

One of the day’s speakers, author and activist Keith Medley, noted that the renovated buildings have removed the word “community” from their titles. “The ‘Trémé Community Center’ is now the ‘Trémé Center,’ ” he says. “And there are others.” He suggests that marketable neighborhoods—not communities—are the goal of the new commercial economy. Ties to friends over the fence take a backseat to flipping properties.

Everyone in the audience understands that there is no stopping New Orleans’s evolution. They know, on this afternoon before American Indepedence Day, that this is a city where black people were sold as property and gentrification could be a modern version of a similar inhumanity—a new wage slavery. The 55 percent of local residents who don’t own homes have seen their rents and utilities rise by 33 percent since 2004, while incomes stagnate.

New Orleans a decade after Katrina embodies the advance of civilization—or the end of it—but the direction of the city is clear. In the short term, thems that got will get, and thems that’s not will lose.

Fati­ma Shaik is the author of five books set in Louisiana and a for­mer reporter for the New Orleans Times-Picayune. Her most recent book is the short sto­ry col­lec­tion What Went Miss­ing and What Got Found (August 2015), a love let­ter to the enter­tain­ing, unpre­dictable and flawed char­ac­ters who pop­u­lat­ed New Orleans before Hur­ri­cane Katrina.
Have thoughts or reactions to this or any other piece that you'd like to share? Send us a note with the Letter to the Editor form.
More articles by Fatima Shaik
Culture
Black and Bengali
A new book traces the hidden story of a mixed-race community.
Dispatch
Chronically Displaced in NOLA
Four years after Hurricane Katrina struck New Orleans, the disaster continues.
Dispatch
NOLA: Priced Out of the Parade
Rising costs, lack of protection, threaten New Orleans' traditional second line marches
Similar articles
Feature
Michael Moore Stars at Academy Awards
Joel Bleifuss
Feature
Chiquita Made a Killing From Colombia’s Civil War. Will Their Victims Finally See Justice?
A long-running case against the banana giant is moving forward in U.S. court.
Matt Kennard and Nick MacWilliam
Feature
Interview with Ali Asghar Gharavi, a member of the Iran Freedom Movement
Jehangir Pocha
Subscribe to our free newsletter
Fearless journalism that speaks truth to power
Limited Time: