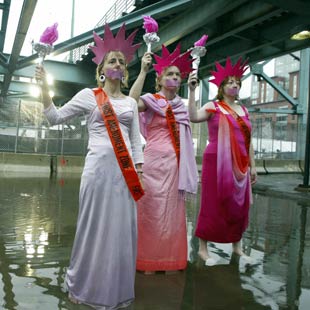 2005 wasn't a very good year for Lady Liberty. The FBI has been spying on Code Pink, whose members protested at the 2004 Democratic National Convention.

FBI, DoD, NSA: All Spying on You

Quietly, the war on terror, in which everything is permitted, has laid the ground work for the Bush administration to intrude into the political life of citizens.

Over the last several months, it has been revealed that the FBI, the Pentagon and the National Security Agency have each set up apparently independent covert operations to monitor the constitutionally protected political activities of citizens opposed to the Bush administration’s war in Iraq.

The Washington Post discovered that under authority granted by the U.S. Patriot Act, the FBI has been issuing what are known as “national Security letters” that allow the bureau to spy on U.S. residents. The November 6 Post reported, “The FBI has issued tens of thousands of national security letters, extending the bureau’s reach as never before into the telephone calls, correspondence and financial lives of ordinary Americans. Most of the U.S. residents and citizens whose records were screened, the FBI acknowledged, were not suspected of wrongdoing.”

According to records obtained by the ACLU under a Freedom Of Information Act request, the FBI’s targets included people involved in a “vegan community project” in Indianapolis, the Catholic Worker movement and its “semi-communistic ideology,” Code Pink, the anti-war coalition United for Peace and Justice, Greenpeace and attendees of the Third National Organizing Conference on Iraq, which was held at Stanford University in May 2005. According to the documents, in some cases the FBI received information about those under surveillance from informers within the targeted groups.

Over at the Pentagon, the Counterintelligence Field Activity (CIFA) office, which was established in 2002, now employees more than 1,000 people. According to the Washington Post, CIFA has what the military calls “tasking authority” over the 4,000 people who work in Army, Navy and Air Force intelligence units. What CIFA does is not exactly clear, but in December, NBC reported it had “obtained a secret Pentagon database that indicates the U.S. military is collecting information on American peace activists and monitoring protests against the Iraq war.” A document stamped “secret” reports, “We have noted increased communication between protest groups using the Internet,” but not a “significant connection” between incidents, such as “recurring instigators” or “vehicle descriptions,” which suggests the Pentagon has been monitoring e-mail and tracking anti-war activists by the cars they drive. The document is 400 pages long and lists 1,500 “suspicious incidents across the country over a 10-month period,” including “four dozen anti-war meetings or protests, including one in Hollywood.” Other groups targeted included The Truth Project, a Quaker group in Lake Worth, Fla., concerned about military recruitment in high schools, and a group at the University of California, Santa Cruz, protesting recruiters on campus.

Christopher Plye, a former Army intelligence officer who exposed Pentagon infiltration of the anti-war and civil rights movements during the Vietnam War, told NBC, “This is the J. Edgar Hoover Memorial Vacuum Cleaner. They’re collecting everything.”

And then there is President George W. Bush’s secret presidential order that gave the National Security Agency (NSA) permission to monitor the international e-mail and phone calls of thousands of people inside the United States. The story was broken by New York Times reporter James Risen, who features Bush’s decision to grant NSA authority to spy on Americans in his new book, State of War. He writes, “For the first time since the Watergate-era abuses, the NSA is spying on Americans again, and on a large scale. The Bush administration has swept aside nearly 30 years of rules and regulations and has secretly brought the NSA back into the business of domestic espionage.”

And we have been down that road before: The FBI’s surveillance of Martin Luther King, infiltration of the anti-Vietnam war and civil rights movements by federal agent provocateurs, three incidents of NSA spying, and, in 1972, Watergate, a covert operation that involved agents of the Nixon administration breaking into Democratic Party headquarters.

Responding to the resulting public outcry, Congress passed the Foreign Intelligence Surveillance Act (FISA) of 1978 that established the Foreign Intelligence Surveillance Court. The FISA court operates out of the Justice Department and approves administration requests for wiretaps by the NSA of people in the United States. It was this court that Bush circumvented when he secretly authorized NSA wiretaps.

These covert operations are a sign that the neoconservatives who set administration policy have adopted the policy of victory over all opponents by any means. (Or, as Senior Editor Kurt Vonnegut says, “Neoconservatism is entitlement to whatever is undefended at home or abroad.”)

As a result, we now have a government that doesn’t respect basic rules of constitutional government. Or, to put it another way, our government has redefined the Constitution in such a way as to justify its actions–and to provide legal protection for those who violate what used to be constitutional rights.

As with the war in Iraq, all of this has some people in the intelligence community worried. Hence, the leaks.

In his new book, Risen explains that his sources with knowledge of the NSA operation became whistle-blowers because they believed “that an investigation should be launched into the way the Bush administration has turned the intelligence community’s most powerful tools against the American people.”

And, as in the war with Iraq, the Bush administration strenuously justifies its actions, giving no quarter.

The administration provides two reasons why circumventing FISA and expanding the authority of NSA to spy within the United States was needed.

First, they argue that FISA courts were not adequate. But James Bamford, the foremost civilian authority on the NSA and author of two books, Body of Secrets and The Puzzle Palace, disagrees: “The FISA court is as big a rubber stamp as you can possibly get within the federal judiciary.” Indeed, from 1979 through 2004, the NSA granted 18,761 warrants and rejected five. In 2004, 1,754 warrants were approved.

He told the Baltimore Sun, “Most of the people I’ve dealt with there had no idea this was going on, and they were very shocked and disappointed that suddenly they’re back to where they were 30 years ago, dealing with questions of domestic spying. … The eventual outcome will be a special prosecutor. … Of course it’s an impeachable offense.”

Bush, Vice President Dick Cheney and others in the administration excuse their snooping by saying it could prevent future 9/11s. On December 17, when Bush confessed that he had expanded NSA’s authority, he cited two of the hijackers who flew the jet into the Pentagon and who had phoned fellow members of Al Qaeda in Yemen while in the United States. He said, “But we didn’t know they were here until it was too late. The authorization I gave the National Security Agency after September 11 helped address that problem.” Cheney repeated this talking point on January 4, in a talk to the Heritage Foundation.

Like so many other Bush administration assertions used to justify policy, like those that got us into a war in Iraq, this one is false. And as with the war in Iraq, the canard has been exposed by patriots in the spy business.

Prior to 9/11, the NSA was already monitoring the number they phoned in Yemen and had the administration wanted to monitor calls in the United States, it could have easily gotten permission to do so from the FISA court.

A senior counter-terrorism official, speaking on the condition of anonymity, told the Los Angeles Times, “The NSA was well aware of how hot the number was … and how it was a logistical hub for Al Qaeda and it was also calling the number in America half a dozen times after the [U.S.S.] Cole [was attacked] and before September 11.” Another official told the paper, “It’s total hubris … It’s arrogance by the people doing this. This is a 24-hour thing, and you can get these kind of warrants immediately. I think they are just being lazy.”

Eleanor Hill, a former Pentagon inspector general and the staff director of the joint congressional inquiry into 9/11, said that members of Congress had repeatedly asked the administration to recommend reforms of FISA. “The question was always asked of these witnesses: ‘What do you need?’ … There was plenty of time to raise this issue. You don’t just take it upon yourself to circumvent FISA. That attitude ignores the absolutely critical need for oversight.”

Yet the trump administration’s trump card remains: terrorism. “This authorization is a vital toll in our war against the terrorists,” said Bush.

The very terrifying nature of terrorism turns those who question the Bush wars on into enemies of the state. It is a message so powerful, that even those opposed to the administration can internalize it. As Angela Y. Davis observes in Abolition Democracy:

Simplistic political discourse a la Bush may not be so much a sign of the lack of presidential intelligence as it is a strategically important way to garner support for global war. What it does is disarm people. It belittles our critical capacities. It invites us to forget about criticism. I think this is one of the reasons why so many people, including progressive and radical people, in the immediate aftermath of 9/11, could not mobilize the moral resources to speak out against Bush.

A similar dynamic seems to be playing out with the domestic spying scandals. Surveillance of potential terrorists is necessary, therefore our rights take second place.

The administration makes no bones about this. Air Force Gen. Michael Hayden, as head of NSA, testified to Congress in 2002 that he met with his staff after 9/11: “I told them that free people always had to decide where to draw the line between their liberty and their security.” Today, Hayden is the Principal Deputy Director of National Intelligence.