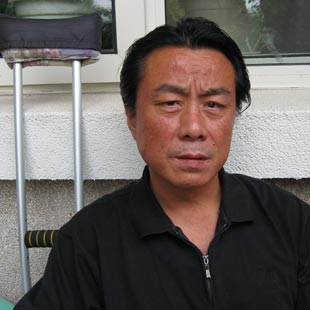 Recently arrested, Qi Zhiyong lost lost a leg after he was shot during the 1989 Tiananmen Square protest

Across China, dozens of dissidents engaged in a national hunger strike to protest the Chinese government’s human rights policies have gone missing or been detained. Aparently this is one of the ways that the Chinese government has prepared for the convening of the National People’s Congress (NPC), the country’s parliament, which went into session on March 5.

The trouble began in early February when prominent human rights activist Yang Maodong, alias Guo Feixiong, was beaten up by thugs suspected of being hired by local police. In protest, a small group of activists led by Gao Zhisheng, a Beijing-based lawyer, began a rolling hunger strike. Since each person had to refrain from eating for only one to two days, it allowed numerous ordinary people to participate and protest the government. As news of the hunger strike spread within the growing ranks of China’s politically disenchanted, many of whom Gao has represented in cases against the government, hundreds of people from more than 16 provinces began to join in.

Chinese authorities have been allergic to hunger strikes ever since 1989, when students used them to boost anti-government sentiment during the Tiananmen Square protests. So, when Gao upped the stakes by demanding the government release the hundreds of political prisoners currently being held in labor camps, the crackdown began.

“Our event is completely peaceful and legal,” Gao said in a telephone interview on March 3. “We’re using our own bodies, in our own homes to do what we choose. Yet people who have joined the hunger strike are disappearing. I don’t know exactly how many people, but this is expanding. I’ve been followed by the police for more than three months and now they’ve tapped my phones and cut off most of my communication.” The next day, Gao, who recently had his license suspended for a year after taking on several politically charged cases, was detained by authorities.

Other prominent dissidents who have been arrested so far in conjunction with the hunger strike include Qi Zhiyong, a Tiananmen Square-era protester who lost a leg after he was shot during the 1989 student protests; Liu Xinjuan, a Shanghai activist who, according to her son, has been forcibly admitted to a psychiatric hospital; Zhao Xin, a human rights activist with the Beijing-based Empowerment and Human Rights Institute; his lawyer, Liao Shuangyan; Yu Zhijian, a teacher from central Hunan province who was jailed for 11 years for desecrating a portrait of Mao Zedong during the Tiananmen protests; and Hu Jia, a Beijing-based activist who was blacklisted by authorities after he revealed how a botched blood donation campaign in central Henan province created a massive HIV epidemic there.

Hu’s wife, Zeng Jinyan, refused to talk directly to the press but pointed journalists to a blog she created after her husband’s arrest. There, she describes how Hu was initially placed under house arrest but disappeared on February 16. “He disappeared without any of the medicines and pills he needs everyday (for a liver condition),” Zeng’s blog said. “When we talked to the [local] police station, they didn’t do anything. He’s just disappeared. There’s no news, and nobody, no department or anyone, is saying anything to us. I’m only publishing this private information because I want my husband back.”

On March 2, Liu Jianchao, a spokesperson from the Chinese Foreign Ministry said that the protestors were not conducting their affairs “under a legal framework.” But beyond that the government has said little and imposed a news blackout around the recent hunger strikes and arrests, making it difficult for the local and foreign media to ascertain exactly how widespread the unrest has been. Gao said he’d received letters of support from more than 1,000 people in mainland China and Taiwan, including students, mothers, farmers and factory workers. “We live under a rogue, almost mafia-type government that abuses its people and its own laws,” Gao said just before his detention. “Only the government and the rich have rights here. The people have nothing.”

A government afraid of its citizens

Chinese authorities routinely round up dissidents before politically sensitive periods–such as June 4, the anniversary of the Tiananmen Square massacre, or when the NPC is in session. Xu Hu, an official from the Ministry of Public Security Ministry official, confirmed that 15,000 police assisted by 620,000 citizen volunteers would clear Beijing of “bad elements” ahead of the parliament session. “This is aimed at reducing certain factors that might harm public order,” Xu told the local media on March 2.

“The government seems to have gone into fear mode over the last few years,” said Brad Adams, the London-based Asia director of Human Rights Watch, in a telephone interview. “From the outside it just seems absurd. But maybe they know something we don’t know about the fragility of the political system.”

China’s GDP has grown at a frenetic 8 percent a year over the last decade, according to government reports. But social and economic inequalities have grown at an even higher rate, causing resentment among China’s 600 million farmers living in remote interior regions that have been totally bypassed by the economic boom that has transformed coastal cities, such as Shanghai.

“Not only have the [workers and farmers] been left out of the growth, they have been exploited to achieve it,” says Cui Zhiyuan, a professor of political economics at Tsinghua University in Beijing.

Cui notes that Chinese farmers still cannot own their own land and local authorities often seize their holdings and sell it to industries at inflated prices.

According to Huo Yan Ting, vice-director of the Shenzhen Modern Social Observation Institute, when the landless farmers go to cities to find work, they are routinely made to toil for little or no wages because independent trade unions are banned in China and workers cannot bargain with employers.

Last year, according to the Ministry of Public Security, more than 87,000 public protests rocked China, about 25 percent more than the previous year. Until now, most of these rallies were over local or personal grievances, such as unpaid wages and pensions and illegal land seizures. But with an estimated 377 million cell phones and 111 million Internet users in China, the country’s dissatisfied have been learning to organize and unite themselves in increasing numbers.

“The government here has always been paranoid of the risks to stability and having activists link up,” says Adams. “Now as [activists] appear to be able to reach across different boundaries and communities, the authorities are particularly nervous.”

Indications of how high concerns are running over China’s internal divisions came from an unexpected source. The week before he was detained, Gao said that he received an open letter from another famous Chinese dissident, Ding Zilin, whose son was killed at Tiananmen Square. Gao said Ding chastised him for organizing the hunger strike, telling him to stick to law and reject politics.

In his open rebuttal, Gao told Ding that, while he respected her, “after 17 years of tragic experiences, you still have not recognized that under this evil regime, the legal path to fight for rights has become a dead end. Your child, once very much alive, was only one of the countless children killed by this cold-blooded regime. … Your experience in fighting for your rights these past 17 years has proven to be without a moment of legal access under this regime. The regime will never allow you any means to resist.”

That rising sense of futility is the most dangerous thing happening in China now, says Adams.

“The government has cracked down so much that today most of the major activists are already in jail,” Adams says. “That means good people who once stayed inside and system and pushed the rules and who could have been tapped to modernize China, have been forced to step outside the system.”