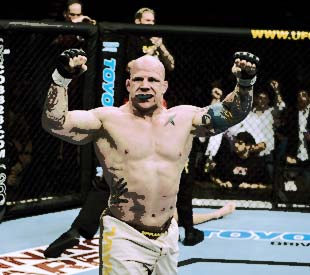 He is, without a doubt, the toughest subscriber to In These Times. Standing 5’ 9” tall, weighing 240 pounds and sporting a shaved head, Jeff “The Snowman” Monson looks like a cartoon ready to pop, a compressed giant of crazy shoulders, massive biceps and meaty forearms.

When he sneers, people shudder. When he sweats, they turn away. When he’s angry, your best bet is to run.

He’s angry right now, even though his combat career in the Ultimate Fighting Championship (UFC)–an often-bloody tournament that combines martial arts disciplines like Brazilian Jujitsu and Muay Thai Kickboxing–is taking off. In February’s pay-per-view event, Monson easily beat his opponent with a chokehold in the first round. If things keep going this way, he could have a title shot in the heavyweight division, against the explosive Andrei “The Pit Bull” Arlovski. So no, it’s not his future career prospects that have him pissed. It’s the state of the world.

“I’m not some sort of conspiracy theorist,” Monson says of his political leanings. “I’m not talking about how the government is trying to hide UFOs. I just want to do away with hierarchy. I’m saying that our economic system, capitalism, is structured so that it only benefits a small percentage of very wealthy people. When I was traveling in Brazil, they had us staying at a really posh hotel. Outside the hotel there was a mom sleeping on the sidewalk with her two kids. That’s when reality hits you. What did that woman ever do? Who did she ever hurt?”

Monson wears his politics on his sleeve, as well as the rest of his body. An anarcho-syndicalist star is tattooed on his chest, an anarchy sign on his back and another “A” on his leg. While he loves his sport, he also feels a responsibility to use whatever exposure he receives for a larger purpose. “I don’t think I’m more important than anyone else, but since some people are paying attention, then I’m going to use this as a vehicle to express myself,” he says. Some fans have labeled him anti-American, but he shrugs off such criticism. He was slightly taken aback, however, when three Secret Service agents showed up at his gym in Olympia, Wash., last fall.

A t-shirt prompted the visit. While Monson was preparing for a fight in Portland, a film crew came to the gym and recorded his outfit that day, which included a tank top that read “Assassinate Bush.” When he entered Portland’s Rose Garden for the fight, a video clip of him training in the shirt was played on the Jumbotron, and after he finished off his opponent in the first round, he was more interested in speaking to the post-match media about the devastation of Hurricane Katrina than his fight career. He mentioned his anger that the Bush administration had diverted $76 million from the Army Corps of Engineers for the levies, and that the National Guard were in Iraq instead of Louisiana and Mississippi. “I was making a political statement, trying to open people’s eyes,” says Monson of his t-shirt and post-fight comments.

Not long after, he had three sets of open eyes walking through the doors of his gym. “The Secret Service told me that they wanted to search my gym and my house. They said that if I refused, they would have a warrant within an hour.” They poked around the gym and then headed over to Monson’s house. “I told them that they could go to my house if they wanted, but that I was going to stay here and finish my workout,” Monson says, not sounding the least bit intimidated. “They haven’t bothered me since.”

The UFC fighting style is called Mixed Martial Arts, but at times it looks more like a barroom brawl, especially to non-practitioners who miss the technique and strategy. It’s easy to poke fun at the event: heavily muscled and tattooed men wearing skimpy skin-tight trunks, celebrity models in the stands beside drunk frat boys wearing wife beaters with their caps on backwards. Its popularity has skyrocketed, thanks in part to the self-styled “first cable network for men,” Spike TV, which has a UFC-based reality show. Tickets can go for nearly $1,000, and sell out quickly.

But the sport is more than mere show. Monson works hard to maintain his gargantuan body. When preparing for a match, he’ll train six days a week–lifting weights, running, boxing, grappling–and though a veteran at 33, he feels like he’s just now reaching his prime in what he believes is the hardest sport in the world. “I would describe it as the evolution of unarmed combat,” Monson says. “You have to know kickboxing, jujitsu, wrestling. If you don’t know how to do even one of them, you’ll be beaten bad.”

Despite his build, Monson is more technician than brawler, and in 1999 and 2005 he won the Abu Dhabi World Submission Championship, held annually in that tiny country recently making headlines, the United Arab Emirates. He takes each UFC fight very seriously. “You can use any technique, and you have to be in great physical shape. You’re facing a guy that’s trying to knock you out or submit you, so it’s no joke.”

Monson sees no contradiction between his radical beliefs and his full-time occupation. “What I do is completely different than war, because everyone wants to be there, and it’s a competition. There’s no victim. We’re all entertainers,” he explains. “If there is any contradiction, it’s that we’re part of the capitalist machine, and I’m really just a wage slave. You know, we don’t make any money without fighting, and if I win I get more; if I lose I get less. But it’s simply a sport. Sure, it’s somewhat like a gladiator sport, but it’s voluntary.”

Monson grew up middle class in Minnesota. His mother still works as a nurse, and his late father worked at a penitentiary. He graduated from the University of Illinois at Urbana-Champaign, where he wrestled, and then received his Masters in Psychology from the University of Minnesota. During his graduate work, Monson had his political awakening–a course entitled Community Psychology.

“Oh man, that class really opened my eyes,” he says. “Just looking at the way the world is run, the way that the people that might be disabled or have mental issues are left behind. How education and general welfare are not a priority, and how the elite run everything for their own benefit. Then I started reading a bunch of stuff–Animal Farm, the International Socialist Review, Chomsky–and I started thinking in a different way.” Monson the Ultimate Fighter uses Plato’s allegory of the cave to describe the experience.

After graduating from Minnesota, he moved to Washington State, where from 1997 to 2001 he counseled the mentally ill for Lewis County; his primary responsibility was to determine whether an individual needed to be institutionalized. “I started right when they were pushing through welfare reform, and so we had all of these huge cuts in money for mental health and welfare. It’s the same basic idea with No Child Left Behind. The government tells you that you have to cut your programs, cut your money for books, cut the money for teachers, but then you are expected to somehow do better. It’s a brilliant strategy, really, from their perspective.”

Despite being a world-class competitor, Monson finds time to remain politically engaged. In 2003, he marched against the Iraq War in Seattle, and protested the Free Trade Area of the Americas in Miami (where the notoriously aggressive cops wisely left Monson alone). He is also a member of the Industrial Workers of the World, and despite the controversy that surrounds him, continues to engage people within the fighting community about politics.

So what lies ahead for “The Snowman”? At the moment his focus is on his next big fight. On April 15, he’ll be back in the Octagon–the distinctive eight-sided ring of the UFC–hoping to make quick work of Marcio “Pe de Pano (Sugarfoot)” Cruz. Then, if all goes well, a title shot.

“But this is not my whole life,” Monson says of fighting. “I’ve got children and a girlfriend, and I like to be with my family. I try to remain involved in political events. After my next fight, I’ll be taking my son to Montreal. They’re having an Anarchist Book Fair, and they invited me to come up and do a workshop.” The topic: self-defense.

Gabriel Thompson is a Brooklyn-based journalist. He can be reached at his web site.