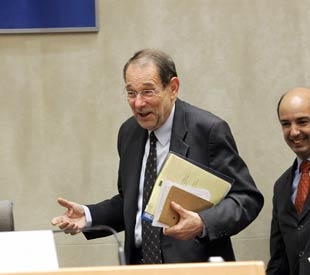 The Council of Europe held a press conference on the CIA's alleged illegal activities in Europe.

Europe Turns a Blind Eye to the CIA

Thirteen members of an E.U. Parliament probe arrived in Washington on May 10, seeking answers to allegations of CIA-operated secret flights and prisons in Europe. A reported 1,000 CIA flights have secretly crisscrossed Europe since 9/11, often transporting “terror suspects” to be interrogated in other countries, such as Egypt, where prisoners are routinely tortured.

But when the Europeans came calling at the nation’s capital, only low-level administration officials and four members of Congress (all Democrats) met with them face-to-face.

Stonewalling from the Bush administration should be no surprise, but European government officials haven’t been any more forthcoming. Javier Solana, the E.U.’s foreign policy chief, told the E.U. Parliament, “I have no information whatsoever that tells me with certainty that any of the accusations, allegations, rumors that have taken place in the last year’s time are true.”

Daniele Ganser, author of NATO’s Secret Armies: Operation Gladio and Terrorism in Western Europe, says European leaders are silent for a reason. “The European and the U.S. intelligence communities are mutually dependent on each other. The rendition programs of the CIA are not being openly criticized by the E.U. intelligence community because the E.U. countries fear that the U.S. will cease to share information.”

“A number of E.U. governments have colluded by simply turning a ‘blind eye,’ failing to ask any questions,” Tony Bunyan, the director of Statewatch, which monitors state and civil liberties in Europe, told the E.U. probe. “So that if asked they could say, ‘No requests for transit or over-flying have been received.’”

In fact, according to the minutes of a meeting about the war on terror by European and U.S. officials in Athens in 2003, the European Union and United States agreed to use “European transit facilities to support the return of criminals and inadmissible aliens.”

Not only do European governments know more about CIA skullduggery on their soil, in some cases they are accomplices. Giovanni Claudio Fava, an Italian Socialist and member of the European Parliament inquiry, wrote in a draft report to E.U. lawmakers that it was “improbable that the abduction of Egyptian cleric Abu Omar on Feb. 17, 2003 in Milan by CIA agents was organized and carried out without the previous knowledge of Italian authorities and security service.”

As the Washington Post reported in November, the CIA is also running secret detention centers in Eastern Europe. Human Rights Watch has named Romania and Poland as likely sites and charges that CIA planes made numerous flights between 2003 and 2004 from Afghanistan to the Szymany airport in northeastern Poland. Meanwhile, the United States signed a deal with Romania in December to build a military base at the Mihail Kogaliniceanu airfield on the Black Sea, which is where the secret CIA site is thought to be located. Those claims have been backed by a fax intercepted by Swiss secret services from the Egyptian Foreign Ministry to their embassy in London, which stated that 23 Iraqi and Afghan prisoners were interrogated at the airfield.

Romania has denied the charges. The Polish parliament launched its own probe, but disclosed its findings only to a closed-door session of parliament last December. Nothing has happened since.

The CIA has also set up counter terrorist intelligence centers (CTICs) around the world, 16 in Europe. In 2005, the CIA’s Deputy Director of Operations, Jose A. Rodriguez Jr., told a closed session of the House and Senate Intelligence Committee that more than 25 CTICs were responsible for more than 3,000 arrests.

Just what type of “cooperation” European intelligence agencies are providing to the CIA at the CTICs is, like everything with the spy agency, murky.

“The history of what the CIA did in Europe since its creation in 1947 is almost completely unknown,” says Ganser. “It’s a black spot in people’s memory.”