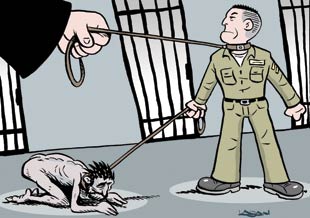 Rechecking the Balance of Powers

The U.S. Supreme Court’s June 29 ruling in Hamdan v. Rumsfeld–that the Bush administration’s military tribunals violated federal law and the Geneva Conventions–resoundingly rejected the theories of radical executive power that the administration has used to justify a whole array of controversial governmental programs. But for now, it seems that the Bush administration remains intent on defending its actions while doing the minimum to comply with the ruling. In early July, the administration announced that it would amend a previous executive order that denied detainees the protection of the Geneva Conventions. Bush has also sought a congressional rubberstamp for a review of the National Security Agency (NSA) eavesdropping program. Such halfway measures are efforts to sidestep the failure of the administration’s central legal strategy: to avoid, at all costs, any judicial ruling on the legality of its conduct.

Ever since the New York Times disclosed last December that the Bush administration was eavesdropping on Americans without the judicial approval required by the law, the administration repeatedly and publicly proclaimed that it had clear legal authority for the actions it took. Beyond defending the warrantless eavesdropping program, champions of the president confidently insisted that he is constitutionally empowered to take any actions he deems to be necessary for national security, even if such actions are banned by laws duly enacted by the Congress. Former Bush Attorney General William Barr described the president’s limitless power this way: “The other branches, and especially the courts, don’t act as a check on the president’s authority against the enemy.”

Such assertions rely on radical theories of executive power that had previously been relegated to the fringes of academic and ideological extremes, but became official executive branch policy in the aftermath of the 9/11 attacks.

The administration insists that the Constitution vests the president with the power to act as “sole organ” with regard to all national security matters. As a result, neither the courts nor Congress–nor anything else–can “interfere” with the President’s decisions. As the Justice Department’s John Yoo put it in his now-infamous September 25, 2001 memorandum, “These decisions … are for the President alone to make.”

Yet while Bush defenders boasted of their certainty that such executive power theories are supported by clear legal authority, the White House’s actions suggested that it feared any judicial examination of its claims. Over the past six months, the administration has opposed and/or blocked every effort–from courts, privacy groups, telecommunication companies and even Republican senators–to ensure that the federal judiciary will adjudicate the legality and constitutionality of the administration’s most controversial anti-terrorism programs, including warrantless eavesdropping, the use of torture and renditions.

In response to every lawsuit, the administration has invoked the previously rare (but, now common) “state secrets” privilege–an extraordinary doctrine which holds that a court should refuse to rule on any matter which the executive claims would risk disclosure of critical state secrets. The Reporters’ Committee for Freedom of the Press reported that while the Executive Branch asserted the privilege approximately 55 times in total between 1954 (the privilege was first recognized in 1953) and 2001, it has asserted it 23 times in the four years after 9/11. The Washington Post’s Dana Priest reported in May that the administration has invoked the doctrine five times in the past year alone.

As Andrew Zajac wrote in the Chicago Tribune, “The Bush administration is aggressively wielding a rarely used executive power known as the state-secrets privilege in an attempt to squash hard-hitting court challenges to its anti-terrorism campaign. … Judges almost never challenge the government’s assertion of the privilege, and it can be fatal to a plaintiff’s case.”

Beyond abuse of the state secrets doctrine, the White House, through its loyalists on the Senate Judiciary Committee, has continuously blocked efforts by senators such as Republican Arlen Specter to direct the secret Foreign Intelligence Surveillance Act (FISA) court to rule on the legality and constitutionality of the administration’s warrantless eavesdropping activities. And in each instance where a court would have an opportunity to rule on the program, the administration has invoked procedural doctrines to keep the court from doing so.

Two cases currently pending in the federal courts allege that the President’s warrantless eavesdropping program is illegal–one brought by the ACLU in the Eastern District of Michigan and the other brought in the Northern District of California against AT&T by the privacy group Electronic Frontier Foundation. In both cases, the Bush Justice Department has moved for dismissal of the lawsuit in its entirety on the ground that the litigation would risk disclosure of “state secrets.”

The administration thus argues that the judiciary must refrain from ruling on the legality of the president’s conduct–even though the administration has already publicly acknowledged that the eavesdropping took place without warrants. Judging the legality of warrantless eavesdropping does not even arguably require an examination of “state secrets.” Decisions by those courts as to whether they will allow the lawsuits to proceed are expected within the next several months.

Earlier this year, the administration used the same tactic to compel dismissal of a lawsuit brought by Khalid El-Masri, a German citizen who alleges–with the support of German prosecutors–that the U.S. government abducted him, drugged him, flew him to Afghanistan as part of the administration’s “extraordinary rendition” program, only to then release him after five months when the United States realized it had abducted the wrong person.

As courts almost always do, the Federal Judge in El-Masri’s case deferred to the administration’s “state secrets” claim and dismissed the lawsuit–despite the fact that, as Priest reported in the Post on May 13, there was no dispute about the accuracy of El-Masri’s allegations: “This year, German investigators confirmed most of Masri’s allegations, which have received extensive publicity in Europe.” In December, during a joint news conference with Secretary of State Condoleezza Rice, German Chancellor Angela Merkel said Rice had admitted the mistake.

But no matter. The Bush administration, knowing that federal courts will defer to its secrecy claims, blocked the court from reviewing El-Masri’s plainly meritorious allegations. And it used the same maneuver last year to compel dismissal of a similar lawsuit, this one brought by a Canadian citizen who claimed that he was taken to Syria by U.S. officials for detention and was tortured.

Similarly, when the NSA “requested” in late 2001 that all telecom companies turn over their customers’ calling records in order to enable it to compile a comprehensive database tracking Americans’ communications, Qwest repeatedly requested, throughout 2002 and 2003, that the administration first obtain a judicial ruling that Qwest’s compliance would be legal. When they refused, Qwest in 2004 asked that they at least obtain an advisory ruling from the administration’s own lawyers in the Justice Department. When the NSA refused that request, too–and made clear that it was unwilling to obtain any ruling as to the legality of its program–Qwest refused to comply due to its concern that the program was illegal. Other telecom companies were not so scrupulous.

Over and over, the administration’s conduct has been directed at one overarching goal: to avoid a judicial ruling as to whether its asserted theories of executive power have any legal foundation. If the administration believed that its conduct was supported by clear legal authority, one would presume that it would welcome such adjudications. Plainly, they are not confident.

The reasons for the administration’s fear of judicial review are self-evident. The notion that the President can act without limitations from the other two branches of government is supported by neither express Constitutional provisions nor this country’s basic founding principles. Indeed, the unrestrained and unchecked executive branch that Bush, Cheney and Gonzalez defend is precisely what the founders sought to avoid when they created a system of government with three co-equal branches, designed to share power in every area, including–perhaps especially–in matters of war.

America’s entire history of constitutional jurisprudence, beginning with the writings of the Founders themselves in the Federalist Papers, leaves no doubt that the administration’s theories of a president with unrestrained powers are entirely alien to our system of government and laws. As a result, President Bush’s conduct is simply illegal.

While it was anticipated and necessary that the Court would rule on the narrow question of whether the military commissions violated the Conventions, the five-justice majority went much further, emphatically rejecting the president-as-monarch theories touted over the last five years by the administration to justify a wide array of increasingly extremist and patently illegal conduct.

The crux of the Court’s ruling was that even grave threats to our national security do not permit the president unbridled discretion to act outside the parameters of the law. Indeed, the Hamdan opinion repeatedly placed great emphasis on what it called “the powers granted jointly to the President and Congress in time of war.” And, in a direct repudiation of the administration’s claim that Congress is without power to limit or regulate the war powers granted by the Constitution to the president, the Court explained: “Whether or not the president has independent power, absent congressional authorization, to convene military commissions, he may not disregard limitations that Congress has, in proper exercise of its own war powers, placed on his powers.”

Whether intended or not, that paragraph, by itself, dispenses with the central misconception–the myth–that the administration has relied on to defend programs of illegal eavesdropping and other legally dubious conduct. More than anything else, the Court’s opinion in Hamdan is a clear rejection of the crux of the Yoo Memorandum. The Court held that Congress– and, implicitly, the courts–most certainly do have a role to play in our system of government, even with regard to the exercise of war powers, and that such decisions are most certainly not “for the President alone to make.”

A system in which the president can engage in illegal behavior but then block the courts from ruling on the legality of his actions is, by definition, a system of lawlessness. And until the Supreme Court in Hamdan boldly reasserted its institutional role in our system of government, an accountability-free system in which the president resides above the law is precisely what America had for the last five years.

The Supreme Court’s decision in Hamdan is an important step towards the restoration of the rule of law and America’s defining constitutional principles.

Glenn Greenwald, a contributing writer for Salon, is the author of the forthcoming With Liberty and Justice for Some: How the Law Is Used to Destroy Equality and Protest the Powerful. Formerly a constitutional law and civil rights litigator, he is also author of the New York Times bestselling books How Would a Patriot Act? and A Tragic Legacy, which examines George W. Bush's legacy.