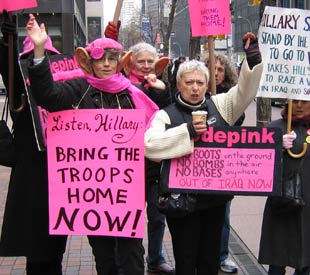 Operation “Bird-Dog Hillary” is part of an effort by CODEPINK to get Sen. Clinton to support bringing the troops home from Iraq.

In November 2005 Hillary Rodham Clinton sent out a fundraising letter to her constituents. “Part of my job is being a good listener,” she wrote, going on to describe all the good listening she does as the junior senator from New York. She concluded, “Now I’d like to listen to you.”

In the envelope with the letter was a three-page, 18-question “2005 Critical National Issues Survey” addressing a range of topics from jobs to homeland security to separation of church and state. Not one question in the survey mentioned the war in Iraq–an omission that came as no surprise to those of us at the New York chapter of CODEPINK Women for Peace.

At the time Hillary prepared her “questionnaire,” close to 2,300 U.S. troops and more than 100,000 Iraqi civilians had died, and polls showed that most Americans were worried about the war and its ill effects, including rising prices at the gas pump. But somehow, Hillary and her handlers thought that ignoring the war was the strategically smart thing to do. And they were right.

It turns out that Hillary has done a tremendous job–of getting New York Democrats to assume that because right-wing Republicans hate her she must oppose the war. Most New York Democratic voters also don’t realize that she co-sponsored an amendment to ban flag-burning, is against marriage equality for gays and lesbians, supports the death penalty, votes consistently for Star Wars appropriations and has served on the board of Wal-Mart for six years. Yet, she is consistently touted as the “liberal Democrat from New York.”

But it is her position–or, rather, her exquisitely-phrased, calculatedly imprecise non-position–on the Iraq War, accompanied by her consistent voting record in support of the Bush administration on Iraq, that had our local CODEPINK chapter trying for weeks before she sent out her “I’m a listener” mailer, to meet with Hillary or someone on her New York City staff.

When the topic turns to Iraq, Hillary repeats the same garbled message in various locutions: We shouldn’t stay, but we shouldn’t not stay; while before we go we should get a job done, we shouldn’t be doing the job we’re doing. If you parse her carefully worded speeches and statements, the only significant differences between Hillary and Bush are that she thinks we need more troops on the ground in Iraq so the war can be better prosecuted–and that she is furiously trying to hide that position from her constituency.

No invitation to talk from Hillary’s office was forthcoming. So CODEPINK NYC pulled together a coalition of local peace groups and launched a weekly vigil outside Hillary’s office on Third Avenue at 49th Street. We bought enormous rubber ears from a theatrical supply company and made signs that said, “Hillary you’re not listening, bring the troops home now.” We passed out information about her positions, and we launched the Web site www.listenhillary.org.

Standing on the sidewalk, in the dead of winter, it was remarkable how many passersby would stop and talk, amazed to learn how close her position on the war was to Bush’s.

Soon after we launched the weekly vigil we got a call from Hillary’s office to set up an appointment. Four of us met with Hillary’s New York City “Director of Governmental Affairs,” a fresh-faced and genial young woman who honestly appeared to know less about Hillary’s voting record or statements on the war than the crowds on the sidewalk. She patronizingly told us that she would pass along our concerns to the senator.

After this fruitless meeting, we coordinated with peace groups around the state and CODEPINK chapters around the country, organizing a statewide and national campaign called “Bird-dog Hillary.”

Wherever Hillary was appearing we were there with our signs and handouts, dressed in pink with big rubber ears. Women also got inside and raised their voices, raining down flyers from balconies, and generally making a notable, if momentary, ruckus. The results everywhere were similar: a genuine sense of amazed–and dismayed–recognition that Hillary’s views on Iraq are out of synch not only with those of many Democrats but of the vast majority of Americans, regardless of party affiliation.

CODEPINK has now become an almost integral part of the Hillary road show. The only major fundraiser we were unable to crash was the one for Hillary held in July by Rupert Murdoch, the location of which was a more tightly-held secret than the location of Dick Cheney’s bunker. The rituals of the campaign trail and the fundraising gauntlet have given us a funny intimacy with her team.

In late May we were outside a fundraiser for Senator Robert Byrd in a private apartment on the Upper West Side of Manhattan at which Hillary was a “special guest.” As the elderly Senator Byrd entered, one of us asked, “Senator Byrd, can you tell Hillary to stop supporting the war?”

Senator Byrd paused and answered, “Ladies, I don’t tell her to do anything.”

A few minutes later Senator Clinton drove up in her shiny black SUV accompanied by her Secret Service detail. As she walked past us, one of us asked, “Senator Clinton, when are you going to help end this war?”

Hillary’s answer: “We’re working on it.”

After she entered the building one of her secret service guys, whom some of us by this point knew by name, winked and asked, “Will we be seeing you later?”

He was referring to the West Village fundraiser for Ohio gubernatorial candidate Ted Strickland that Hillary was co-hosting. A few minutes later we were on the subway heading downtown.

In June we bought tickets to a Women for Hillary fundraising luncheon at the Hilton Hotel in Midtown Manhattan. Eva-Lee, Missy and I went into the ballroom where 1,000 enthusiastic and decorous attendees were taking seats at their tables. I spotted a mother from my kid’s school and a business acquaintance of my husband’s who had told me point blank that she despised Hillary. What were they doing here? Placing their bets on the Democrats’ leading horse.

Staging a protest at a Hillary event is a delightfully surreal experience. We were assigned to Table 121, way in the back (we paid $125 apiece for our tickets; the tickets up front went for $1,000) but very close to the bank of press cameras. We nervously ate our cold salmon and chatted with other women at our table.

We were in Hillaryland: we watched a slickly produced Hillary film in which she single-handedly revived New York State’s economy, palled around with firefighters and cured two children of cancer. A lot of eyes got misty, both on screen and in the audience.

Then she made a grand entrance down a side stairway, greeted with a standing ovation. She read through a very, very long list of politicians’ wives and other supporters. And when she said “support” for the 100th time, Missy stood up and shouted, “What about supporting our troops by bringing them home?” This was our cue.

Eva-Lee and I removed the sweaters covering our pink T-shirts, on which we had written pro-troop messages with black fabric markers (mine said “2,475 U.S. military deaths: How many more?”) Then we unfurled our pink satin TROOPS HOME NOW banners. As we started chanting “troops home now,” the cameras strayed from Hillary and toward us.

The Hillary campaign employees, secret service guys and hotel security who came to escort us out were resolutely polite, by now familiar with the recurrent and inevitable drill. One young campaign worker said, “If you’ll be quiet, you can stay.” I answered loudly, “Troops out now” and off we went. Missy ran forward, handing out photos of her nephew who had been killed in Iraq.

The bulk of the e-mail we get congratulates us on our work, but some complains about the “Bird-dog Hillary” campaign. One woman reminded us that Hillary was a feminist who wore sandals in college and suggested that as women and feminists we should be supporting her. Another New Yorker asked why we weren’t targeting our senior senator, Chuck Schumer, who isn’t much better than Hillary on the war. That one had an easy answer: Chuck Schumer is neither running for re-election nor positioning himself for a presidential run.

CODEPINK will continue to push the war issue to center stage, as others are doing in Connecticut, fueling Ned Lamont’s successful challenge to Senator Joe Lieberman. When he was stumping for Lieberman in July, President Bill Clinton referred to the war as “the pink elephant in the room.” Well, the pink elephant has raised its head, as has CODEPINK.

Nancy Kricorian, whose most recent novel is All The Light There Was, has been on the national staff of CODEPINK Women for Peace since 2003.