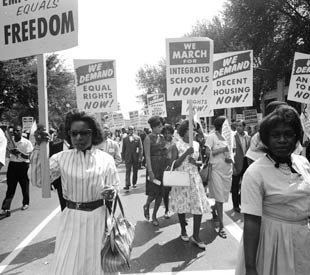 In 1957, as the civil rights movement gained steam, the conservative National Review opined: “the White community in the South is entitled to take such measures as are necessary for it to prevail, politically and culturally, in areas in which it does not predominate numerically.” Why? “Because, for the time being, it is the advanced race.”

As the civil rights movement convinced most white Americans that this kind of in-your-face racism was wrong, conservative leaders had to find new ways to make their case. They learned to redirect the moral power of civil rights rhetoric to fight any policy that might actually yield greater equality. Today, conservatives invoke equal opportunity and the “earned” advantages that come from effort and merit, as they denounce discrimination (“reverse discrimination,” that is) with born-again fervor.

Two important new books by historians reveal the sordid origins of this politics of “race neutrality.” Both trace its emergence to grassroots white opposition to racial justice in the Sunbelt South and point to the ’70s as the time of its triumph. White Flight: Atlanta and the Making of Modern Conservatism, by Kevin M. Kruse, traces “color-blind” conservatism to Atlanta, where, as Kruse puts it, “Much of the modern suburban conservative agenda–the secessionist stance toward cities, the individualistic outlook, the fervent faith in free enterprise, and the hostility to the federal government–was, in fact, first articulated in the resistance of southern whites to desegregation.” In The Silent Majority: Suburban Politics in the Sunbelt South, Matthew D. Lassiter reaches beyond Atlanta to offer a region-wide and comparative view. His portrait shows that blue-state readers ought not to feel smug: The mechanisms that local conservatives fashioned to protect white suburban privilege now work better in the North and West than in the South.

Both works point toward economic justice as the vital frontier for civil rights today. Without a fight against class privilege in public policy, they demonstrate, black poverty will only deepen in the new, ostensibly race-neutral, suburban-dominated order.

White Flight reveals how profoundly the Old South shaped the New Right. Kruse’s gripping account takes off in the ’40s, when black Atlantans pushed for fair treatment with new confidence after World War II. As they organized voter registration drives and demanded better schools and services, the city’s moderate power structure began to bend. That infuriated some working-class whites in neighborhoods adjoining overcrowded black communities, and some turned to proto-fascist organizations like the Columbians and the Ku Klux Klan. But they didn’t get far, and they learned from that failure.

In devastating detail, Kruse documents how some of the very people who had rallied to fascist appeals realized that subtler, hate-free messages would achieve more. They built new homeowners’ associations, ostensibly race-neutral, to advocate their “rights”–especially “freedom of association,” understood as the right to have all-white neighbors, classrooms, and public accommodations. The founder of the West End Homeowners’ Association, for example, came from the “Housing Kommittee” of the Ku Klux Klan. Homeowner organizing taught segregationists that to win they must avoid violence, curb outright racist rhetoric and enlist widely shared “middle-class values” such as “the home as a reward for a life of hard work.” Using the new framing, white property owners exerted political power to contain black home buying, restrict public housing projects and ensure that black communities never gained equal services.

When the Civil Rights Act of 1964 imperiled that strategy, many whites safeguarded their privileges with what Kruse calls a “politics of suburban secession.” In other words, they deserted the city. The African-American share of Atlanta’s population doubled, from one-third in 1960 to two-thirds by 1980. By then, less than one in 10 public school pupils was white. Losing broad-based support, public institutions withered and whites balked at paying for them. Embracing an ideology that exalted individual liberty over the good of the community, such whites flocked to the conservative agenda of tax revolt, school vouchers and wider privatization of public services.

Yet, in the end, the working-class segregationists on whom Kruse focuses may not have been the real culprits in the deepening of urban racial inequality. Matthew Lassiter reveals how, by making low-income white city residents bear all the burdens of desegregation, affluent whites in the suburbs created the conditions that made backlash likely. Lassiter’s study of homeowner politics and municipal policy in several southern cities shows how suburbanites rejected the overt resistance policies that came from the Deep South. Yet, while denouncing segregationists as bigots, they escaped to their own parallel universe of exclusive communities and schools in which entrance costs ensured homogeneity. What it took to win over these new voters, a chastened Nixon learned when his race-baiting “southern strategy” bombed in the 1970 mid-term elections, was a “color-blind and class-driven discourse.”

Such appeals had bipartisan roots, Lassiter reminds liberals who are inclined to avoid the mirror when pointing fingers. The “affiliation of voters as Republicans or Democrats,” he notes, “has often mattered less than the populist identifications of suburban residents as homeowners, taxpayers, and schoolparents.”

Throughout the entire country, such unapologetic class segregation gained the blessing of the Supreme Court in two momentous rulings of the early ’70s. “Wealth discrimination” by suburban communities, the court said, is okay in America.

Lassiter’s powerful and persuasive exposition of the consensus among suburban voters and national authorities will be disheartening for seekers of social justice. Yet his work also holds out an alternative to the downward spiral.

By comparing several different cities whose success with desegregation varied, Lassiter shows how public policy can make a difference. In particular, he asks why Charlotte, N.C., ended up with far more integrated public schools than Atlanta. Where Atlanta was legally cut off from its suburbs and imposed busing only on white working-class communities within the city limits, Charlotte annexed its suburbs to spread the benefits and costs of desegregation among the entire metropolitan population. That outcome was a victory for the local civil rights activists and blue-collar whites whose coalition forced the county’s white elite to participate in two-way busing with a grassroots-backed class-action lawsuit, Swann v. Charlotte-Mecklenberg. Thanks to its commitment to class fairness, their school system became one of the most successfully integrated in the nation. Integrated by both class and race, the system provided such high-quality education that two-thirds of white families stayed loyal to public schools. Proud of the results, even Charlotte Republicans balked when the Reagan administration tried to end their busing program.

While a beacon, the Charlotte approach also proved a rarity: most American cities reacted to the civil rights challenge as Atlanta did. They are now marked by “a metropolitan landscape of spatial apartheid,” with hyper-segregated and resource-starved urban schools and overwhelmingly white suburbs that jealously guard their borders. Anxious to curry favor with these suburban voters–who since 1992 have constituted the majority of the electorate–Democrats as well as Republicans turn a blind eye to what they now characterize not as unfair racial discrimination, but as acceptable class exclusivity.

Commitment to middle-class entitlement has an all-American following among whites today, these books make clear. Yet in their emphasis on its local, organic origins, both authors neglect the steady agitation of national conservative leaders, including those grouped around National Review, who in time defeated Republican moderates and turned the GOP into an arm of their movement.

The GOP right and its wealthiest backers benefited the most from the reconfiguration of metropolitan space to enshrine the convictions of neo-liberal ideology. By enabling the fantasy that white suburbanites have played no part in black disadvantage, the rhetoric of color blindness nurtured, as Lassiter puts it, “an identity politics of suburban innocence that defined ‘freedom of choice’ and ‘neighborhood schools’ as core elements of homeowner rights and consumer liberties, rejecting as reverse discrimination any policy designed to provide substantive integration remedies for systematic inequality of opportunity.”

With so many whites now persuaded that the biggest investment of their lives depends on letting “the market” reproduce inequality without any government correction, the right has inertia on its side, whichever party wins the next elections.

Nancy MacLean is a professor of history and African American studies at Northwestern University. Her most recent book is Freedom Is Not Enough: The Opening of the American Workplace