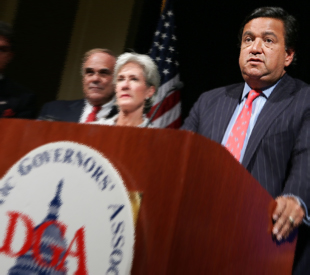 Governor Bill Richardson (D-NM) as already received more contributions from a private prison company than any other politician campaigning for state office in the United States.

While New Mexico’s landscape may make the state the Land of Enchantment, its rapidly growing rates of incarceration have been utterly disenchanting. What’s worse, New Mexico is at the top of the nation’s list for privatizing prisons; nearly one-half of the state’s prisons and jails are run by corporations.

Supposedly, states turn to private companies to cope better with chronic overcrowding and for low-cost management. However, a closer look suggests a different rationale. A recent report from the Montana-based Institute on Money in State Politics reveals that during the 2002 and 2004 election cycles, private prison companies, directors, executives and lobbyists gave $3.3 million to candidates and state political parties across 44 states.

According to Edwin Bender, executive director of the Institute on Money in State Politics, private prison companies strongly favor giving to states with the toughest sentencing laws–in essence, the ones that are more likely to come up with the bodies to fill prison beds. Those states, adds Bender, are also the ones most likely to have passed “three-strikes” laws. Those laws, first passed by Washington state voters in 1993 and then California voters in 1994, quickly swept the nation. They were largely based on “cookie-cutter legislation” pushed by the American Legislative Exchange Council (ALEC), some of whose members come from the ranks of private prison companies.

Florida leads the pack in terms of private prison dollars, with its candidates and political parties receiving almost 20 percent of their total contributions from private prison companies and their affiliates. Florida already has five privately owned and operated prisons, with a sixth on the way. It’s also privatized the bulk of its juvenile detention system. Texas and New Jersey are close behind.

But in Florida, some of the influence peddling finally seems to be backfiring. Florida State Corrections Secretary James McDonough alarmed private prison companies with a comment during an Aug. 2 morning call-in radio show. “I actually think the state is better at running the prisons,” McDonough told an interviewer. His comments followed an internal audit last year by the state’s Department of Management Services, which demonstrated that Florida overpaid private prison operators by $1.3 million.

Things may no longer be quite as sunny as they once were in Florida for the likes of Nashville, Tenn.-based Corrections Corporation of America (CCA) and the former Wackenhut, now known as the GEO Group of Boca Raton, Fla. But with a little bit of spiel-tinkering–and a shift of attention to other states–the prison privatizers are likely to keep going.

The key shift, Bender explains, is that “the prison industry has gone from a we-can-save-you-money pitch to an economic-development model pitch.”

In other words, says Bender, “you need [their] prisons for jobs.”

If political donations are any measure, economically challenged and poverty-stricken states like New Mexico are a great target. In this campaign cycle, Democratic Gov. Bill Richardson has already received more contributions from a private prison company than any other politician campaigning for state office in the United States. The Institute of Money in State Politics, which traced the donations, reported that GEO has contributed $42,750 to Richardson since 2005–and another $8,000 to his running mate, Lt. Gov. Diane Denish.

Another $30,000 went from GEO to the Richardson-headed Democratic Governors Association this past March. Richardson’s PAC, Moving America Forward, was another prominent recipient of GEO donations. Now, its former head, prominent state capitol lobbyist Joe Velasquez, is a registered lobbyist for GEO Care Inc., a healthcare subsidiary that runs a hospital in New Mexico.

But don’t get the idea that GEO has any particular love for Democrats: $95,000 from the corporation went to the Republican Governors Association last year alone. What companies like GEO do love are the millions of dollars rolling in from lucrative New Mexico contracts to run the Lea County Correctional Facility (operating budget: $25 million/year), and the Guadalupe County Correctional Facility ($13 million/year), among others. CCA also owns and operates the state’s only women’s facility in Grants ($11 million per year).

To make sure that those dollars keep flowing, GEO and CCA have perfected the art of the “very tight revolving door,” says Bender, which involves snapping up former corrections administrators, PAC lobbyists and state officials to serve as consultants to private prison companies.

In fact, the current New Mexico Corrections Department Secretary Joe Williams was once on GEO’s payroll as their warden of the Lea County Correctional Facility. Earlier this year, Williams was placed on unpaid administrative leave after accusations surfaced that he spent state travel and phone funds to pursue a very close relationship with Ann Casey. Casey is a registered lobbyist in New Mexico for Wexford Health Sources, which provides health care for prisoners at Grants, and Aramark, which provides most of the state’s inmate meals. In her non-lobbying hours, it turns out that Casey is also an assistant warden at a state prison in Centralia, Ill.

It appears that even for a prison industry enchanted by public-private partnership, Williams and Casey may have gone too far.