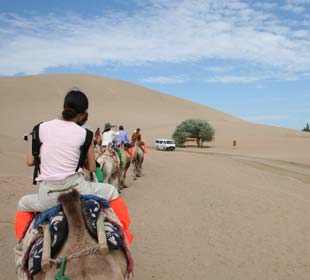 As expanding deserts have encroached on Dunhuang, the city has created a 'sand park' where people ride camels and sleigh down dunes.

A new Chinese export has been spreading quietly across Asia and the United States: dust.

Violent sandstorms from China’s expanding deserts have been battering numerous Chinese cities, and now their mustard-colored dust has begun reaching South Korea, Japan and the west coast of North America.

“People dusting off their cars in California or Calgary often don’t realize the sand has come all the way from China,” says Lester Brown, president of the Earth Policy Institute (EPI) in Washington D.C., who was in Beijing recently. “There is a dustbowl developing in China that represents the largest conversion of productive land to desert of any place in the world … and it’s affecting the world.”

China has always suffered from aridity, as about 20 percent of its landmass is comprised of deserts made famous in tales about the Silk Road that traversed many of them.

But the situation is getting worse. Persistent drought, overgrazing, indiscriminate use of ground water and rampant logging are eroding the edges of China’s deserts, allowing them to merge and spread. Recent satellite imagery shows that the Badain Jaran desert in north-central China is pushing southward toward the nearby Tengger desert to form a single, larger desert, overlapping both northwestern Gansu province and neighboring Inner Mongolia.

“When I was a kid, the desert was five kilometers [three miles] away but now it’s right here,” says Li Liang, 19, gesturing to the sand now lining the periphery of his family’s cotton farm just outside Dunhuang in Gansu. “Every year there are sandstorms, and every time there is a sandstorm our cotton is destroyed and we have to replant it, which costs a lot.”

Ironically, the Li family’s diminishing profits are rooted in China’s increasing prosperity. The leading cause of China’s desertification is the growing number of sheep and goats being reared in places such as Gansu for China’s increasingly prosperous 1.3 billion people who are eating more and more meat.

China now has 400 million cattle, sheep, goats and yaks, up from 100 million in 1960. Most of these animals are owned by traditional herders who graze them on ecologically fragile hills and steppes, so the animals have uprooted and eaten up vast swathes of grassland. As the topsoil has loosened, strong winds have blown it away, creating massive sandstorms and turning the area into desert.

According to official reports, about 4,000 villages across China have recently been swallowed by the encroaching desert and more than 200 million people are suffering from the effects of desertification.

Significantly, it’s not just tiny hamlets like Li’s that are being threatened. The legendary Gobi desert in central China has expanded by about 25,000 square miles since 1994 and its sands are now within 100 miles of Beijing.

The capital gets blasted by about half a million tons of sand every year, often reducing visibility to the point where even its soaring skyscrapers are barely visible, air traffic stops and people are forced to stay indoors.

Curiously, while such sandstorms seriously impact human health by causing and exacerbating various skin, breathing and eye disorders, they can be quite good for the earth. Often, the minerals transported during sandstorms provide new nutrients to inland ecosystems and the seas, according to the Asian-Pacific Regional Aerosol Characterization Experiment, an international campaign focused on understanding how dust particles affect the chemistry of the atmosphere.

The organization’s researchers say they also want to study how dust changes the quantity of solar energy our planet radiates back into space, something that will enhance our understanding of climate change.

But that’s cold comfort for Yang Jian, director of the Development Planning Department in the Chinese Ministry of Agriculture, who is worried about how China’s desertification will impact food supplies.

Yang says China needs up to 500 million tons of grain every year. While the country is currently self-sufficient in food, production is slipping. The biggest reason for the decline is that about a million acres of arable land have been lost to urban sprawl over the last decade, according to official reports. Though Yang’s ministry has reserved 255 million acres of land for agriculture, much of it is in areas affected by desertification.

If the desert eats substantially into China’s arable land, Beijing will be forced to import grains. This would raise world food prices, a potentially life-threatening shift for the world’s 350 million poor who live on less than $1 a day, Yang says.

With official reports also warning that China is losing about $7.7 billion a year because of desertification, the government is trying hard to battle the creeping sands.

Farmer Li says local officials ordered his family to switch from growing cotton to planting trees in the hope that reforesting the desert’s periphery will help contain it. Many counties in Gansu have also restricted herders from grazing their animals on damaged grasslands, and cities such as Beijing are creating “shelter-belts” of grass and trees around themselves.

China is even trying to water arid regions by seeding clouds with silver iodide, which creates “artificial” rain. The chemical, which is sprayed into clouds by plane or cannon shell, cools clouds so their moisture condenses and falls as rain.

So far, the Chinese government has equipped about 35,000 farmers with antique anti-aircraft guns and trained them to fire shells loaded with silver iodide into passing clouds.

But according to Gao Jixi, director of the Institute of Environmental Ecology in Beijing, which studies desertification, even the most innovative measures will not roll back the desert if China’s GDP-growth oriented policies continue to ignore environmental costs.

“It is more important we respect nature’s rules by restoring the original ecological systems in those regions,” Gao says.

But that seems far off: Chinese authoritarian leaders cannot afford to promote any policy that may slow its economy.

“Chinese leaders have a legitimacy problem”, says Jing Huang, senior fellow at the Brookings Institution in Washington D.C. “Their only tools for staying in power are nationalism and economic growth.”

Growth is particularly important in Gansu, Inner Mongolia and other poor western provinces such as Xinjiang and Tibet, which have substantial minority populations. Conscious of how disliked the Communist Party is in these areas, Beijing is trying to win over hearts and minds by delivering economic development.

But the mega public works projects being built in these areas, such as the new 1,300-mile-long railway linking Beijing to Tibet, often take a massive environmental toll.

In Xinjiang, where Muslim Uighurs have launched an armed insurgency to demand independence, Beijing’s attempts to increase irrigation are backfiring. The province’s Tarim River has dried up, and the large poplar groves around it that once served as a barrier between two deserts, the Taklamakan and the Kumtag deserts, are disappearing. As a result, these two parched swathes of sand are merging just like the Badain Jaran and Tengger deserts in Gansu.

The new proximity of the desert to urban centers such as Dunhuang and Beijing has prompted some local entrepreneurs to create “sand parks” where city kids can ride camels, toboggan down dunes and drive SUVs. But charging people so that they can frolic in sand that is literally smothering Chinese villages–and even spreading across the Pacific Ocean–is emblematic of the benign disinterest that overlooks the long-term environmental costs of short-term profits.

The EPI’s Brown says that China is the country that best exemplifies this global problem. Such unbalanced development, he warns, is threatening to spawn catastrophes that could destabilize the entire world.