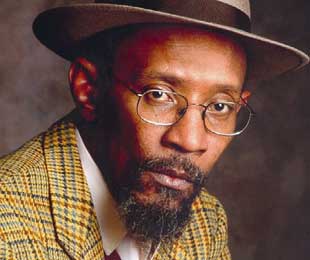 When I first heard Linton Kwesi Johnson’s words, they came flowing through a nearly blown-out sound system in a Los Angeles punk club in the early ’80s.

I could barely hear him, but something about the intensity of his delivery–urgent, streetwise and intellectual–over a pulsing reggae beat made me take notice.

Pressed up against the stage, I turned my small, 15-year-old frame around to watch as a handful of older punks begin to chant the lyrics, mimicking Johnson’s thick, Jamaican Creole English:

That song, “Di Great Insohreckshan,” tells the story of the Brixton race riots of 1981, when working-class Black and Asian immigrants teamed up with punks living economically and politically marginal lives to fight against the high rates of unemployment and rampant police brutality. Linton Kwesi Johnson’s poems describing the riots–and the decades of oppression that led to them–are striking. Johnson (known as LKJ to his fans) has to be spoken to be felt and, for some, just to be understood.

Born in 1952 in the small, poor rural town of Chapelton, Jamaica, in the country’s pre-independence days, LKJ moved to England with his mother in 1963, along with many other Caribbeans from the Commonwealth seeking a better life. But at every turn, most of those Afro-Caribbeans–as well as their children and grandchildren–found that the Britain of opportunity and equality existed only in their dreams. Ghetto housing, poverty, and police and intra-ethnic violence marred and marked their lives. LKJ wrote about these people, eventually, setting many of his poems to a backdrop of reggae music in a form he called “dub poetry,” a term he coined. (A later generation of political British singers also known as dub poets has included Mutabaruka, Oku Onuora, and Macka B.)

LKJ had a fire for political and race analysis from an early age. At university, he studied sociology; he later joined the Black Panther Movement–a British organization distinct from the American Black Panther Party–and worked with a number of British black radical political and musical collectives. Believing strongly in the DIY ethic and in the right to control one’s own means of production, in 1980, he started his own record label, LKJ.

The musical environment that LKJ grew up in was a mix of the Jamaican musical styles of rocksteady, reggae and dub reggae (a version of reggae with heavy echo, unusual sound effects and typically languid pacing), so he gravitated toward that genre. Unlike many of his musical peers, he eschewed–but never disrespected–the spiritual framework of the Rastafarian religion, giving his songs an appeal to audiences uncomfortable with worshipful shout-outs to the deposed Ethiopian Emperor, Haile Selassie.

In the ’80s and ’90s, LKJ focused on his UK audiences, occasionally touring the United States with sold-out shows packed with a dynamic mix of Rastas, punks and left-wing activists. LKJ’s recorded music has been available to U.S. audience on such gems as Dread Beat An’ Blood (Virgin, 1978), Forces of Victory (Mango/Island, 1979), LKJ in Dub (Island, 1981) and Making History (Island, 1983)–as well as a host of records released through his own label, LKJ Records, including Tings an’ Times (1991), LKJ Presents (1996), and More Time (1998)–and most recently in the form of the Island Records CD collection, Independent Intavenshan (1998).

For the first time, LKJ’s poetry has been published in the United States, in a brilliant collection entitled Mi Revalueshanary Fren. The book was released this year by the New York-based poetry publisher Ausable Press, complete with a companion CD of LKJ reading his own poetry–sans musical accompaniment.

Johnson delivers his poetry in a melancholy, matter-of-fact tone and fills it with chilling, revolutionary imagery. All that’s required of unfamiliar tongues is the willingness to linger on the poem long enough to understand.

LKJ’s dub poetry is written and spoken in a vernacular that has a history that few understand. In his introduction to Mi Revalueshanary Fren, Russell Banks notes, “Jamaican creole is a language created out of hard necessity by African slaves from 17th century British English and West African, mostly Ashanti, language groups, with a lexical admixture from the Caribe and Arawak natives of the island. It is a powerfully expressive, flexible and … musical vernacular, sustained and elaborated upon for over four hundred years by the descendants of those slaves.”

Take this section of “Inglan is a Bitch,” an LKJ ode to the struggles of the Black working class:

LKJ has helped legitimize a language previously dismissed as the “pidgin” English of people too uneducated or lazy (or both) to grasp proper English, introducing it to the world in poetry. In a nod to that accomplishment, in 2002 LKJ’s work was included in Penguin Books’ Modern Classic series, earning him the distinction of being the first Black poet–and the second living poet–to be included in the anthology.

Still, some have mistaken LKJ’s poetic linguistics as that of an uneducated man unable to speak the King’s English, something that LKJ pokes fun of in the poem, “If I Woz a Tap-Natch Poet,” which he introduces with a quote from the Oxford Companion to Twentieth-Century Poetry: “[D]ub poetry has been described as … ‘overcompensation for deprivation’.”

The bespectacled, bearded and introverted poet doesn’t look the part of a seasoned performed. But once on stage, LKJ springs to life, animating his lines with graceful little dance steps. In lieu of the experience of LKJ live, Mi Revalueshanary Fren is a wonderful introduction–or complement, as the case may be–to listening to him drop poetic political science over deep, throbbing bass lines:

Ausable Press is at www.ausablepress.org. For more on Linton Kwesi Johnson, visit www.lkjrecords.com.

Artists Explore the Hidden Tolls of Life Lived at a Distance