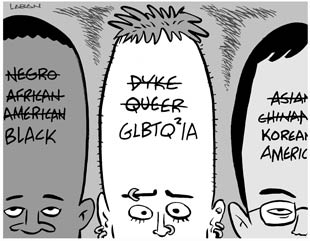 Your ‘how-to’ guide to avoid offending anyone

In the late ’70s, “politically correct,” “PC” for short, entered the public lexicon. Folks on the left used the term to dismiss views that were seen as too rigid and, also, to poke fun at themselves for the immense care they took to neither say nor do anything that might offend the political sensibilities of others. “You are so PC,” one would say with a smile. In the ’80s, the right, taking the words at face value, latched on to the term and used it to deride leftish voices. Beleaguered progressives, ever earnest, then defended political correctness as a worthy concept, thus validating conservatives’ derision. Today, on both the left and the right, being PC is no laughing matter; three decades of culture wars have generated a bewildering thicket of terminology.

To help me parse what’s PC and what’s not, I had help from people attuned to the nuances of words, particularly those that describe race, ethnicity and sexual identity. Rinku Sen is a 40-year-old South Asian woman. She is the publisher of Colorlines, a national magazine of race and politics, for which she has developed a PC style manual. Tracy Baim is a 44-year-old white lesbian. She grapples with the ever-evolving nomenclature of sexual identity and politics as the executive editor of Windy City Times, a Chicago-based gay weekly. Lott Hill is a 36-year-old white gay male who works at Center for Teaching Excellence at Columbia College in Chicago. He interacts with lots of young people–the font from which much new language usage flows.

African American: In 1988 Jesse Jackson encouraged people to adopt this term over the then-used “black.” As he saw it, the words acknowledged black America’s ties to Africa. “African American,” says Hill, is now “used more by non-African-American people, who cling to it because they are unsure what word to use.” Sen says, “African American” is favored by “highly educated people who are not black. Whether one uses ‘black’ or ‘African American’ indicates how strong your social relations are with those communities.” And Chris Raab, founder of Afro-Netizen, says, “People who are politically correct chose to use African American, but I don’t recall any mass of black folks demanding the use of African American.”

Asian: The correct term to use for anyone of Asian ancestry. When accuracy is desired, nationality of origin is appended to “American,” as in “Korean American.” Sen, who describes herself as South Asian or Indian American, says that there is “some push around not conflating everybody into Asian. This is mostly an issue among new immigrants. If there hasn’t been time for a generation, it seems to be hard to move those folks to the Asian category.”

Bitch: A word, says Baim, which is “absolutely being reclaimed by a younger generation of women who are asserting their sexuality and control of their sexuality.” Successfully repurposed by Bitch magazine over the past decade, ‘Bitch’ is now becoming passé as less edgy writers like Cathi Hanauer, author of The Bitch in the House, adopt it. Similarly, though more slowly, “slut,” “whore” and “cunt” are being reappropriated. “The young people use those terms all the time teasingly and sometimes to even refer to themselves,” says Hill. “It is more common to hear someone say ‘I am a slut’ than ‘I am a whore.’ ” “Cunt” is gaining currency among some young lesbians, though Baim says it is a word that gets stuck in her throat. “While it is a reclaimed word, it is one I can hardly say, the same way some older blacks have trouble saying the n-word.”

Black: At Colorlines “black” is used with a capital B, while The Associate Press Stylebook advises use of the lower case.

Boi: A word, says Hill, that is “used by young queer people to refer to either young gay males or young females who are presenting as males.”

Brown: A general term for people who are not white. Colorlines uses “brown” in a casual or playful way. “We might have a headline ‘Brown People to the Back’ in a story about restaurant hierarchy,” Sen says. Sometimes used to refer to Latinos, as in the “black-brown” coalition that helped elect Harold Washington mayor of Chicago in 1983.

Chicano: Correct term for people of Mexican ancestry, popularized during the civil rights movement. “We use it to refer to U.S.-born people of Mexican descent,” says Sen. “Mexican American is the more distant, politer thing to say.”

Dyke: A word lesbians have reclaimed. Hill, however, says that among the young it is “on its way out.”

Fag (faggot): The new “queer.” “Like the n-word, it’s a word that can be said by gay people,” says Hill. “I hear ‘fag’ a great deal, especially among queer-identified young people, like ‘don’t be such a fag’ or ‘you are such a fag.’ “

Feminist: “A word that the younger generation doesn’t always embrace,” is how Baim, 44, describes it. A lot of young women, she says, are “feminists but they don’t want to be pigeonholed.” “Feminist somehow became a tainted word along the way,” says Hill. “I have heard a lot of people say, ‘this sounds feminist’ or ‘I used to be a feminist.’ “

Girl: “‘Girl’ is used by older women,” says Baim. “It is kind of nice because it used to be used derogatorily and now it is used in a fun way.”

GLBTQ2IA: The acronym for Gay, Lesbian, Bi, Transgendered, Queer, Questioning, Intersex, Allies. “This is coming from the youth movement, the college campuses, it has not seeped into the whole community at this point,” says Baim, who at the Windy City Times uses GLBT, an acronym the New York Times has not yet seen fit to print.

Guys: Very controversial. Used, especially in the Midwest, when referring to a group of people. “In Chicago that word gets used a lot,” says Hill. And Baim says, “I use it all of the time.” Some feminists, like Andi Zeisler, the editor of Bitch, find “guys” problematic. “We assume the descriptor ‘guys’ denotes a quality of universality,” she says. “It would be hard to imagine a group of men being addressed by their server as ‘hey you gals’ and not taking offense, but the reverse happens all the time.”

Hir (hirs): Gender neutral for him and her. At Wesleyan University, incoming freshmen are instructed to use gender-neutral pronouns in campus correspondence. As one person wrote on the university’s online Anonymous Confession Board, “I am usually attracted only to people of hir original gender, rather than hir intended gender. As such, I’m afraid that I’m, like, viewing hir wrong, or not respecting hir wishes or something.”

Hispanic: “We never use Hispanic,” says Sen. “It privileges the European roots of the identity of Mexicans born in the United States.” Hispanic, however, is the preferred term of people in the Southwest whose families are descendents of Spanish colonists.

Indian: The preferred term for Native Americans. “Indians either use their specific tribal name or use Indian,” says Sen. “You use the qualifier American when you need to distinguish from Indian Indians.”

Latino: (Capital “L,” with “a” or “o” at the end used to connote gender.) Politically correct term for those from Spanish or Portuguese speaking cultures. “We use it instead of Hispanic when we want to refer to many different national groups where there has been an indigenous-European mix,” says Sen.

Macaca: The latinization of the Bantu “ma-kako,” meaning monkey. According to the Global Language Monitor, former Sen. George Allen (R-Va.) helped make this the most politically incorrect word of 2006 by using it to refer to an Indian American.

Native American: Some Indians object to the term, seeing it as a way to linguistically eradicate “Indian” and thus the history of their oppression by whites. “I almost always hear Native American, and in the more enlightened conversations there is usually ‘indigenous’ thrown in there somewhere,” says Lott. Sen says, “Native American seems to be a more distant construction, developed by academics.”

Nigger: “It is a word that white students struggle with and black students use pretty freely,” says Hill. “Young people are much more open to using it, especially young people who are black or who have been exposed to more diverse groups of people.” While Sen says, “I can’t imagine a political or a social multiracial situation where it would be appropriate, but I know that is because I am too old. The word is so prevalent in the popular youth culture, grounded in hip-hop, that I wouldn’t like to predict where that debate is going to end up. But if the popular culture ends up agreeing that it is okay to use, then I think there are a lot of pretty scary implications.”

Queer: Anyone who falls outside the lines of straight. “It has been reclaimed far ahead of faggot or dyke,” says Baim. “It is our buzz word,” says Columbia College’s Hill. “It is how we avoid saying all of those letters [GLBTQ2IA].” REM lead singer Michael Stipe, for example, is queer, not gay. “For me, queer describes something that’s more inclusive of the gray areas,” he told Butt, a pocket-sized Dutch “fagazine.” “It’s really about identity I think. The identity I’m comfortable with is queer because I just think it’s more inclusive.”

Transgendered: (trans) A person who is not presenting as their biological gender. “It is fascinating how transgendered is becoming like an octopus with all the tentacles of identity and personal design. The transgendered movement is burgeoning and fluid, they are creating all of these new ways to define who they are,” says Baim.

Ze: Gender neutral for he or she. As Mary Boenke writes on the PFLAG (Parents, Families and Friends of Lesbians and Gays) Web site: “When talking with Leslie Feinberg, noted transgender author, I asked Leslie which pronouns to use. Ze shrugged hir shoulders and said ze didn’t care.”