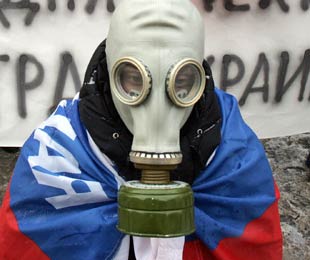 A member of "Young Russia" in a gas mask in front of a poster reading "Czech Today, Ukraine Tomorrow" during a rally against Czech participation in U.S. anti-missile defense system, near the Czech embassy in Moscow.

Return of the Cold War

As if the Bush administration didn’t already have its hands full with the “war on terror” spiraling out of control in Iraq and Afghanistan, its Jan. 20 announcement that it plans to expand the proposed U.S. missile defense system into the former Warsaw Pact nations Poland and the Czech Republic is threatening to re-kindle the Cold War.

Russian President Vladimir Putin has spoken out forcefully against the proposal, calling it emblematic of the United States’ “increasing disregard for the fundamental principles of international law.” In response, he threatened to pull Russia out of the Conventional Armed Forces in Europe (CFE) Treaty, which spells out how many soldiers and how much military hardware can be deployed throughout the continent.

Putin isn’t alone in his anger. Several hundred people gathered on a snowy day in late January at Wenceslas Square in Prague, to protest the controversial anti-missile defense system. The proposed construction has sparked debate in the central European country and mobilized progressives who oppose it.

Under the proposal, the Czechs would house the radar system and the Poles the silos with 10 rockets to shoot down missiles fired from “rogue regimes” like Iran and North Korea. The United States already has missile interceptor sites in California and Alaska.

A missile site in Poland would be the first part of the anti-missile shield outside the United States and the only one in Europe. “The government does not have a mandate to authorize the base,” says Jan Tamas, a leader of the “No Base” movement, which is calling for the issue to be decided in a national referendum.

Prime Minister Mirek Topolanek has opposed the the idea, arguing that “security issues usually are not decided by referendum.” “Locating the base here will undoubtedly improve the security of the Czech Republic and Czech citizens,” Topolanek said.

But many Czechs fear the base will make them the target of terrorist attacks as they are dragged into Washington’s geopolitical schemes. Nevertheless, several polls show a majority of Czechs back the plan if it entails only a radar base, perhaps in hopes that in exchange the United States will drop visa requirements (and the onerous fees) for them. Lingering fears of Russia may also be tipping many Poles and Czechs into the arms, literally, of the Americans.

Backers also see it as a chance for the Czech Republic to do its part in the “war on terror.” Most prominent among them is former dissident, playwright and president, Vaclav Havel, who has backed several American interventions, including the Iraq war (although he now advocates for a U.S. withdrawal).

“Do the Czechs want to be a modern European society, which feels a shared responsibility for the state of the world,” Havel asked on Jan. 25, “or would we prefer to leave the resolution of global problems to others?”

Topolanek faces a tough fight to win parliamentary backing for the American plan. His fragile center-right government was cobbled together in January after seven months of on-again, off-again talks. Topolanek’s Civic Democratic Party generally supports the radar scheme, but the coalition partner Christian Democrats are less enthusiastic, and the third and oddest member of the government, the Greens, are the most hostile, saying it would back the plan only if it is part of a NATO system and not just an American one.Ê

The leader of the opposition Social Democrats, Jiri Paroubek, has said most of his party’s members oppose the idea. In early February, Paroubek backed off from calls for a referendum after “being leaned on,” by U.S. officials in Prague, according to the London Guardian. Still, the Social Democrats and, even more so, the Czech and Moravian Communist Party are in the opposition camp.

Some of the wariest Czechs are those living in Jince, about 30 miles southwest of Prague, where the United States wants to base the radar installation at a former military site. Protests have been held there as well.

Czech Foreign Minister Karel Schwarzenberg visited the region in February to meet nervous local mayors and reassure them that hosting about 200 Americans will pump up the local economy.

“The Cold War is returning to Europe,” says Josef Hruby, mayor of Zajecov, who met with Schwarzenberg. “I just don’t want to live through my kids having to learn how to put on gas masks.”

Judging by the rhetoric, Russian fears dwarf Czech concerns. On Jan. 23, Vladimir Popovkin, who commands Russia’s space forces, told Russian news agencies Interfax and ITAR-TASS, “The radar in the Czech Republic would be able to monitor rocket [Russian] installations in central Russia and the Northern Fleet.” And on Feb. 19, General Nikolai Solovtsov, commander of Russia’s missiles forces, upped the ante, saying, “If the governments of Poland and the Czech Republic take a decision to this effect, the strategic missile troops will be capable of having these facilities as targets.”

On the same day in Warsaw, Topolenek and his Polish counterpart Jaroslaw Kaczynski said the system was not aimed at Russia and expressed their clearest support yet for the plan.

Russia wants Washington to promise in writing that the missile system is not aimed at its country, according to a Feb. 6 Interfax report. “The Russians say, ‘This is my backyard. You need our cooperation.’ They are right. You cannot stop Iran or contain Iran without Russia. You need the Russians on board,” Andrew Brookes, a space technology expert at London’s International Institute for Strategic Studies, told the AFP news agency on Jan. 26.

Some experts question the point, militarily at least, in building a radar station in the Czech Republic. According to Bruno Gruselle, a researcher at the Paris-based Strategic Research Foundation, “the U.S. military already has radar stations in Norway, in Greenland, and in Britain — on top of its Defense Support System satellite alert system — which permit the early detection of missiles, wherever they come from.”

There’s also the question of whether the missile defense system will ever be functional. Despite being the single largest defense research and development project in U.S. history, with the Bush administration spending more than $40 billion on the program, only five of its 10 tests have been successful, and all of those were achieved within carefully controlled environments that did not reflect real-world conditions.

Perhaps the U.S. goal is more political than military. In his 1997 book, The Grand Chessboard, former U.S. National Security Advisor Zbigniew Brzezinski wrote that maintaining U.S. primacy would require Washington “to prevent collusion and maintain security dependence among the vassals, to keep tributaries pliant and protected, and to prevent the barbarians from coming together.”

None of the vassals here in “New Europe” are making any mention of that.