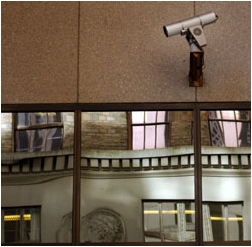 Police are advocating surveillance cameras on city streets—and at protests.

Smile, the cops are watching

BY Ryan Singel
Share TweetReddit0 EmailPrint
While many Americans find themselves obsessed with watching reality TV, they increasingly—and unknowingly—may be caught on the government’s hidden cameras. Police departments across the country are using or considering closed-circuit surveillance cameras to watch over public spaces—including at protests and rallies.

Some cameras, like those that monitor the front doors of a court building, are not much more invasive than the cameras at ATMs and convenience stores. In Baltimore, for instance, a nonprofit group called Downtown Partnership controls 64 marked cameras that monitor select city blocks in an attempt to cut down on street crime.

A spokesman for the group dismisses privacy concerns, saying the cameras aren’t monitored, police only view footage after a crime is reported, and footage is deleted after seven days. Still, the group is looking to add cameras in a new entertainment district in the city.

Other systems are far more ominous and have received much more attention, even when ineffective. Amid national controversy, Tampa, Florida, installed cameras and facial recognition software in June 2001 to catch criminal offenders and runaways. The city discontinued the system after a year, never having matched a single person to a mug shot in the database.

The same technology combination was put in play during the 2002 Super Bowl in Tampa, where it scanned the crowd for felons and “terrorists.” But the system was deemed ineffective and quietly benched before this year’s game.

Now, the fight over surveillance has moved to the nation’s capital. Over the past two years, without telling the City Council, Washington police have spent millions on a sophisticated surveillance camera system that uses hidden, high-resolution, remote-control cameras and wireless Internet services. The system shares a sophisticated command center with the Secret Service and the FBI.

The cameras can zoom in on virtually any house or backyard in the downtown area and were first tested in April 2000, when they monitored protesters at anti-globalization marches. Agents from the Army’s Intelligence and Security Command aided the department’s surveillance of the protests, details of which were distributed to other federal and local agencies through the federally funded Regional Information Sharing System (RISS), according to Intelligence Newsletter.

The City Council, angry with the police for not getting approval for the project, adopted a resolution in November 2001 that limited use of the cameras. The resolution requires public notification before cameras are turned on, orders police to delete footage after two weeks, and bans audio recording and racial profiling.

However, the American Civil Liberties Union, which has proposed an alternate bill, had hoped the resolution would fail. “The regulations legitimize the use of cameras for general video surveillance,” says Stephen Block, legislative counsel for the ACLU. “This usage is very different from red light cameras or narrowly focused cameras used for criminal investigations.”

Police used the cameras to search for the D.C. snipers in October and at the September IMF/World Bank protests, a January pro-life protest and the huge January and February anti-war protests. The cameras were on for most of February in response to the heightened terrorist alert, and will also be used at Washington’s March 15 anti-war march. Police there say they generally only monitor, not record, camera feeds.

Both Police Chief Charles Ramsey—known for authorizing pre-emptive arrests of anti-globalization activists—and Mayor Anthony Williams have publicly expressed their intention to emulate London, where the average citizen is caught on camera 500 times a day.

London has an estimated 150,000 public cameras, which it uses, in part, to levy an approximately $8 charge on all cars entering the city center. However, crime rates have gone up in England, despite the 2.5 million cameras nationwide.

England started installing the cameras in the early ’90s in response to Irish Republican Army terrorist bombings, and the cameras have been largely uncontroversial there. “There is a great deal of safety and security that people feel [in London],” Ramsey told the Washington Times. “All we’re trying to reach here in the District is that same sense of safety and security.”

Since public controversy erupted over the D.C. system, Ramsey has backed off his ambitious plans. But a white paper, prepared by the system’s designer, reveals the early goals of the program. “Eventually, the Washington system will bring together cameras operated by different jurisdictions across the metropolitan area to include transportation, schools and potentially private security sources,” the paper says. “Law enforcement officials will be able to view these images at the command center and broadcast the video to computer units already installed in most of the city’s 1,000 patrol cars.”

Police shouldn’t be surprised at the backlash against security cameras. Last March, the ACLU revealed that Denver Police had been spying and keeping detailed files on protesters for years. The dossiers include names, addresses, biographies and license plate numbers of those who attended peaceful rallies. The files even identify the Quakers as a “criminal extremist” group.

Police in Worcester, Massachusetts, were caught systematically photographing protesters, one by one, at a peace rally in October 2000, on the day the United States started bombing in Afghanistan. It was later revealed that the department had been photographing participants at rallies for years.

Privacy groups say they are trying to prevent the government from revisiting the widespread surveillance abuses of the ’60s and ’70s as chronicled in the congressional Church Report, which disclosed that the FBI had a list of 26,000 people to be detained in the event of a national emergency.

Johnny Barnes, executive director of the Washington ACLU, worries just as much about the self-imposed censorship that cameras can create, especially in D.C. “We don’t know how many people won’t exercise their First Amendment rights because they are afraid of surveillance,” Barnes says.

The City Council, which held extensive hearings on the cameras in December, will return to the issue in coming months.

The ACLU argues that if camera surveillance takes hold in our nation’s capital, proponents of cameras will use it as a model for the rest of the country. Says Barnes: “We ran from a British-style system in 1776, and we should run from it now.”