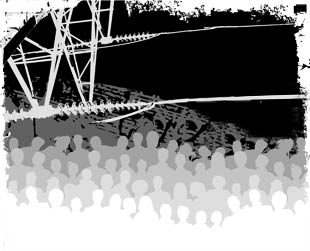 The input of many is a powerful tool in today's DIY media.

Is Wikipedia the New Town Hall?

Public broadcasting everywhere is in crisis, and in part it’s because technology seems to be turning pubcasters into dinosaurs. In fact, not just them, but all broadcasters. Consider the business leaders: NBC formally declared itself an “Internet company” and is slashing its analog TV investments. Mega-media mogul Rupert Murdoch bought MySpace last year and is now considering dumping his satellite assets because he’s looking forward to wireless digital TV. Pubcasters used to be providers of trusted information. But when bloggers are so busy linking to each other that they hardly have time to watch television or read newspapers, is the mainstream media–even the PBSes and NPRs–becoming irrelevant?

No wonder pubcasters are suffering heartburn these days. But why should the rest of us care about their problems? Because communications make up the circulatory system of public life in a democracy–and for almost a century mass media have been central to the public sphere.

The public sphere is the informal part of our lives where we manage the quality of our shared culture. Church, the post office, sidewalks, Starbucks, the water cooler–they are all places in the physical world (or what our digerati friends like to call “meat space”) where people bring along their experience with the media. It is an informally structured set of social relationships, where power can be mobilized against large institutions such as the state and large corporations.

Mass media have acted as a pseudo-public sphere. Broadcast news services were stand-ins for our collective, top-priority concerns of public life. Popular programs were, similarly, pseudo-public culture, distilled examples of how a culture understands itself–or at least as corporate broadcasters would like it to.

Public broadcasting has been a protected, if compromised, zone that provides some higher-quality opportunities for people to learn about each other and their problems, and to share a common cultural experience of consuming the same media. But public broadcasting is still a stand-in for public communication, because it is a mass medium. The broadcasters speak to the many, who then talk to each other.

Can digital media change this? Can new technologies bring media made by, with and for the public? Could pubcasters be part of it?

Certainly new technologies have created such opportunities for “many-to-many” communication, and people are leaping upon it. The pace of change is extraordinary. The blogosphere is doubling every six months, as measured in the number of weblogs. It’s a multilingual and multicultural environment. Social networking has exploded. Traffic on MySpace, which two years ago was insignificant, had already by early 2006 far outstripped traffic to traditional news Web platforms such as the New York Times and CNN.

What used to be the audience is gradually being supplanted by a new entity–a wildly fluctuating set of networks of people engaged in issues and topics and passions who seize upon communications media to make their networks real and make things happen. Yesterday’s screen talked to you; you talk through today’s screens, whether through Skype or on your video-enabled cellphone. Yesterday you listened to the news; now you link to it on your blog. Yesterday you watched the movie; now you make a video, put it on YouTube and link it to your Facebook account. Never before have there been so many opportunities for publics to communicate, critique and create media.

But will this new open environment actually generate public media–media for public knowledge and action, media that helps a public into being and nourishes it? There’s reason for some enthusiasm. In a new book, The Wealth of Networks, legal scholar Yochai Benkler makes a powerful argument that DIY (do it yourself) media offer unprecedented opportunities for truly public communication. Communications can now, finally, visibly be the constitutor of public life.

This is not merely an idea. Today, everybody has a blog–there are at least 70 million. They are growing by the minute, and they are growing around the world. Blogs, it turns out, are socializing machines. Writers want readers and get them by linking up with other bloggers, and so blogs form complex clouds of social relationships.

What about the public part, though? Are they actually fueling conversations about issues that affect the public in ways that allow publics to form and act? Consider a traditional role of public media: to serve as a watchdog on power. The blogosphere has acted in this way, transcending at times political partisanship.

For instance, when Sens. Tom Coburn (R-Okla.) and Barack Obama (D-Ill.) proposed the creation of a searchable database of all federal government contracts and grants over $25,000, political bloggers of all stripes loved the idea. It would be a treasure trove for anti-corruption research. Then suddenly one senator put a “secret hold” on the bill, stalling it.

The blogosphere erupted, especially Republicans and libertarians. Bloggers told people to contact their senators. Everyone did. Bloggers also pooled efforts to flush out the secret-holder–Ted Stevens (R-Alaska)–and the outcry forced him to lift the hold. Mainstream media reported on the event. The bill was passed. And the Office of Management and Budget, which will maintain the database, had a meeting with bloggers to ask for their continued support for efforts to monitor spending.

How about the provision of reliable information, another function of public media? Wikipedia is surprisingly good proof that collaborative work by amateurs can provide balanced and reliable information, and even become a vigorous site of public debate and negotiation. Wikipedia is an open-source encyclopedia of whatever information people want to explain to other people. It’s wide open to anyone, has more than three million articles in 125 languages…and only three employees, counting founder Jimmy Wales. Everyone else is a volunteer, donating money, time and energy–many of them briefly. They follow a few clear rules, including one that calls for a “neutral point of view”–not objectivity but a fair representation of different perspectives.

A Wikipedia entry is a living and constantly changing organism, reflecting the current state of negotiations between people of vastly differing opinions on a subject. For instance, the entry on abortion reflects constant input, monitored and edited by others of differing views.

How accurate is Wikipedia? That depends on the strength of the publics that gather around the topics that are covered. But what’s shocking is how accurate it is. Science entries are more accurate than entries in history. Facts that stand alone do better than those for which the meaning changes dramatically in context. But the community of active contributors does a lot for accuracy. When Alex Halavais, a professor of interactive communication at Quinnipiac University in Hamden, Connecticut, deliberately entered errors–some minor, some middling–into 13 widely differing Wikipedia entries, all were corrected within three hours.

What is so exciting about Wikipedia isn’t just the generation of new information, but the creation of active publics around the creation of knowledge for publics. People who have certain entries on their watch lists are part of a public in which there can be vigorous disagreement but shared interest in addressing an issue.

Wikipedia and blog actions take some explaining. How can you get reliability out of a mass of unreliable actions? James Surowiecki, an economics writer at the New Yorker, gives it away in the title of his book, The Wisdom of Crowds. He analyzed the research literature on group decision-making and exposed the counter-intuitive fact that crowds can in fact be wise, under certain conditions. In fact, time and again when asked to solve a problem, groups of people who individually and without consultation pool their opinions–even when their expertise varies widely and includes real experts–seem regularly to come up with answers that are at least as good as that of the most accurate member of the group.

Not all crowds or groups, though. They need to be diverse, not in a politically correct sense but in the sense of a great variety of kinds of knowledge. You need the ignoramuses along with the smart alecs. They need to guard against being influenced by what they think others are going to say. They need to have ways to aggregate their knowledge. They need to be able to coordinate their actions based on that knowledge.

Now people can make their own media, share it with others and aggregate what interests them, and rank this material. That is a “wisdom of crowds” recipe for decentralized, collaborative media creation.

Plenty of policy roadblocks remain in the way: How will we allocate this spectrum in the future? How will commercial and noncommercial providers of Internet access structure their networks? How will today’s inequalities be translated into the online environment? How will we safeguard the public from violation of privacy and fraud while maintaining equality of access? But this is a thrilling if also terrifying time for public media. Pubcasters could be leaders in developing new platforms.

And some pubcasters are toying with the idea of playing a role as facilitator of open public media spaces. For instance, Minnesota Public Radio has turned its listeners into sources and generators of new stories with Public Insight Journalism. StoryCorps is generating grassroots oral histories for public radio. The Independent Television Service and Boston TV station WGBH are both hosting “mashup” sites for online video. They’re all demonstration sites that let us glimpse the possibilities of public media made by and for the public itself.