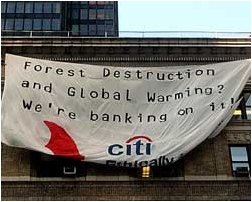 BY Ben Winters
Share TweetReddit0 EmailPrint
Maybe it was his appearance at Cornell University on April 2 that pushed Sanford “Sandy” Weill over the edge. The Citigroup CEO and chairman, a Cornell alum and donor, struggled to stay on message while enduring a barrage of protests from members and allies of Rainforest Action Network—including two students who unfurled a giant banner that read “Destroying old growth forests isn’t cool” before being hustled out of the auditorium.

Or maybe it was RAN’s television ad campaign, launched in the New York area a week before the Citigroup April 15 shareholder meeting, in which various celebrities castigated the financial behemoth for its environmental record.

Whatever the cause, on April 11 RAN’s leadership got a message from Citigroup’s Vice President for Global Community Relations, Pam Flaherty. The message was: Enough.

The result is what RAN calls a “ceasefire” and what Citigroup folks prefer to term a “new phase in an ongoing dialogue.” Either way, it is unquestionably a turning point in RAN’s 3-year-old Campaign for a Sane Economy, which has portrayed Citigroup as a sort of alpha polluter, providing funds to environmentally destructive logging and mining projects all over the globe.

But the environmentalists are calling off their activism, for now, to enter what RAN organizer Dan Firger characterizes as “an intensive period of negotiation.” The goal is simple: a set of commitments to environmental citizenship that RAN hopes will “set a bar” for the entire financial industry. He cites RAN’s 1999 victory in pressuring Home Depot to stop selling old-growth wood, which led other, smaller home-goods retailers to do likewise.

“Citigroup has already made a couple of commitments to RAN, and they’re very general, but they are signs that they’re taking this seriously,” Firger says. Citigroup has agreed, for example, “to begin to report the greenhouse gas intensity of power plant projects they finance. So that at least represents a good-faith effort to take into consideration [carbon dioxide] emissions.”

In a letter to shareholders and RAN’s membership, Citigroup stresses its recent leadership in drafting the “equator principles,” a set of global environmental standards agreed to by four of the world’s largest project finance banks: Citigroup, ABN AMRO, Barclays and WestLB. The corporation promised to do more “in the short term to reduce degradation or destruction of endangered ecosystems in the conduct of our business.”

But RAN will be seeking more than that at the negotiating table, says Firger: “We’re looking for really specific language and very specific commitments.” RAN wants Citigroup to establish “no-go zones” that will be off-limits to the kind of massive, environmentally disruptive resource extractions often funded by project finance banks.

A Citigroup spokeswoman reports that the bank is “very happy to be in a positive dialogue with RAN.” She adds, “We’re a very large company, and we have a very complex set of issues to deal with, and you can’t just do some things overnight. I think that is part of this whole conversation.”

But Firger is optimistic, and says he feels there has been a “perception shift” in leadership at the corporation. The same could be said for RAN, which will suddenly be working alongside a bank it has spent the last three years condemning as one of the world’s most destructive. (As if to underscore the dangers of sleeping with the enemy, a few weeks after the Citibank-RAN announcement, the Washington Post ran a damning story on a much larger green organization, the Nature Conservancy, that charged the group with maintaining chummy relationships with major polluters.)

Deciding when and to what degree to compromise with Citigroup is a “fine line to walk,” says Firger.

“We want to win real concessions from corporations that are destroying the planet while at the same time not legitimizing the corporation, or giving them a ‘green’ stamp of approval. The thing we keep in mind is there are ecosystems all around the world—and indigenous people living on these sites where projects are being proposed—for whom these concessions are a matter of life and death. A victory, even partial, makes a difference in the lives of people.”

Ben Winters is a journalist, arts critic, and playwright living in Brooklyn.