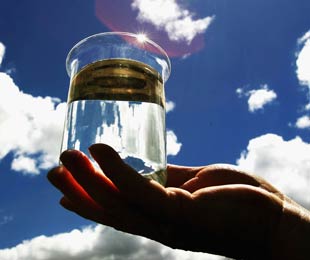 Who should own the water: communities or corporations?

A Win in the Water War

Stockton, Calif., residents have stopped one multinational company from taking over their water system, but other localities remain threatened

Bill Lokyo never expected to find himself embroiled in a six-year battle over water with a multinational corporation and city officials in Stockton, Calif.

“We all thought this would only be a one-year fight,” Lokyo says.

But Lokyo and the group Concerned Citizens Coalition of Stockton (CCOS) felt compelled to challenge a rushed deal that turned the city’s publicly owned water system into a for-profit venture. This month, their perseverance paid off when the city finally sent privatization packing.

“We believed that we were right,” Lokyo says. “And when you believe that, you just can’t stop.”

In 2003, against the wishes of many Stockton residents, the city signed a 20-year contract with the company OMI-Thames to manage its wastewater, water and stormwater system. The CCOS, joined by the Sierra Club and the League of Women Voters of San Joaquin County, filed a lawsuit under the California Environmental Quality Act to halt the project until it allowed for public participation. Judges twice ruled in favor of the groups, and on July 17, city officials voted to rescind their appeal and dissolve what Food and Water Watch, a group that challenges corporate control of water resources, has called the “most notorious water privatization deal in the United States.”

As Loyko and fellow members of CCOS celebrate, water watchdogs mark another tally for citizens fighting to keep or regain local control of their water.

More than 80 percent of Americans fill their glasses with water owned and managed by public utilities–a market for growth that has CEOs rubbing their hands. Across the United States, multinational corporations are swooping into towns and cities with promises of a more efficient and economical water system if they would just turn over their taps.

But for many municipalities, it is a raw deal. Privatization often results in exorbitant water rates, poor service, little accountability, a disregard for public safety and destruction of the environment. City officials in Atlanta, for instance, cancelled their contract with Suez four years into privatizing their water system after residents experienced routine boil orders, water shortages and rate hikes.

“People get at a very basic level that they don’t want a really important public service like water to be privatized,” Hauter says. “They don’t want the customer call center to be 1,000 miles away. They don’t want their water rates going up. Privatizations are succeeded with environmental disasters, as [companies] try to cut corners and they don’t fix the leakages.”

Two hours from Stockton, residents in Felton, Calif., have been trying to pry their pipes out of a corporation’s grip since 2002. Cal-Am, owned by the multinational giant RWE, raised water rates by 44 percent and is pushing for another increase that would raise rates by a total of over 100 percent.

The citizens’ group Felton Friends of Locally Owned Water (FLOW) is spearheading a campaign to buy back the water system in the belief that a “locally-owned, locally-managed water system could offer much lower rates, better service and protection of our natural resources.” Cal-Am has refused to sell, and the group is now trying to use eminent domain to take over the system.

Jim Graham, a member of Felton FLOW, says he was “ecstatic” to learn that neighbors in Stockton succeeded in ousting OMI.

“Their hard work and perseverance over the years has been an inspiration to us and we’re glad to see it paid off for them,” Graham wrote in an email. “We’re confident that we’ll prevail, too, and will be inviting Stockton folks over for a big town celebration when it happens.”

California isn’t the only state where citizens are fighting a tug-of-water with corporations and the city officials who approve the deals. Residents in Lexington, Ky., have been organizing to regain control of their water from RWE, and the federal government and the Indiana Department of Environmental Management are investigating the company Veolia Water for allegedly falsifying water quality records.**

But public control of water isn’t problem-free. Public utilities are struggling financially to maintain and modernize water systems, and water infrastructure is deteriorating across the nation. A 2005 report card issued by the American Society for Engineers gave the United States a “D-” for drinking water infrastructure, warning, “America faces a shortfall of $11 billion annually to replace aging facilities and comply with safe drinking water regulations.” An estimate by the coalition Water Infrastructure Network (WIN) puts the funding shortfall at $23 billion per year.

Ken Kirk, executive director of the National Association of Clean Water Agencies, which represents more than 300 public utilities, says the lack of funding puts the health of water at risk. “The consequences of not addressing the [funding] gap are serious and maybe even non-reversible,” he says.

But while billions are needed to restore and protect America’s drinking water, the Bush Administration has repeatedly cut federal funding to address the problem. Bush’s 2008 budget actually provides incentives for the privatization of water utilities, rather than increase funding to the public sector.

With little help from the government, some flailing municipalities are looking to public-private partnerships to keep them from drowning.

“Some [municipalities] say, ‘Gee, maybe we should privatize and turn our facilities over to the private sector. Maybe they’ll do a better job and we wouldn’t have to worry about it,’” Kirk says. “That isn’t going to work, and hasn’t worked in most cases.”

Instead, both Kirk and Hauter, along with the WIN coalition, are pushing for a federal trust fund dedicated to supporting clean and safe public water. The government already has similar trust funds that sustain that nation’s highways and airways.

“If trust funds are good for highways and airports, than why not water?” Kirk says.

But as lawmakers consider legislation to adequately fund water infrastructure, private corporations are buying up public utilities. People need to be “engaged” and “watchdogging” at the community level to protect their water from corporate takeovers, says Hauter.

**CORRECTION: The original version of this story mistakenly reported that it was the city of Indianapolis that was investigating Veolia Water for mismanaging its water supply. We regret the error.