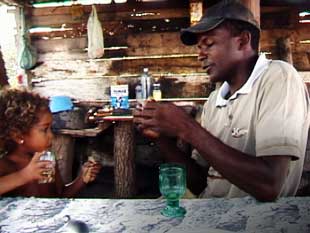 In a still from Quilombo Country, Hugo Souza and his daughter eat doughnuts for breakfast.

Unlike the United States, where slavery is too often relegated to the shadows of history, in Brazil the memory is still alive–especially in the Quilombos, the encampment communities that escaped or freed African slaves founded in the country’s vast mountain ranges and deep jungles. Leonard Abrams’ documentary, Quilombo Country, examines the legacy of slavery that haunts the people who live there, explores the vibrant culture of these communities and chronicles the challenges they face in modern-day Brazil.

Quilombo Country opens with the frenetic beat of Tambor da Criola, a music native to the state of Maranhão. As women dance and turn, making their skirts swirl around them, the men drum and sing about traveling a long and difficult path. An older man in the village explains that slaves created this dance as a way to enjoy themselves while living an existence almost wholly defined by cruelty and misery.

Narrated by Chuck D of Public Enemy fame, Quilombo Country is divided into three sections, each focused on one Quilombo community–Itipacura in the northeastern state of Maranhão; Marajó, an island at the mouth of the Amazon River, in the state of Belem; and Trombetas, in the Amazon. This parallels the path of slavery in Brazil, which began in the 1550s under the Portuguese occupation in the northeast state of Bahia, before moving westward to the Amazon, when settlers realized that the land was ideal for growing sugarcane.

Initially, the Portuguese enslaved indigenous Brazilians. But when the natives began dying from European diseases and the demand for workers exceeded available numbers, the Portuguese looked to Africa.

Over the next three centuries, Brazil brought approximately 3.6 million people to work on sugarcane plantations–37 percent of all Africans sold into slavery. In one moving scene, a resident of Marajó tells how his grandfather was sold for a bottle of cachaça (sugarcane alcohol) and a crate of bananas. And though Princess Isabel officially abolished slavery in 1888, the practice continued unchecked in many parts of the country.

In 2004, Brazil admitted that at least 25,000 people are still working under slave-like conditions, and in July the government raided a sugarcane plantation in the Amazon, liberating more than 1,000 workers–the largest anti-slavery raid in recent history.

To counter the brutality of slavery, Quilombos often acted as resistance groups, leading rebellions and plantation raids. Today, many residents view themselves as carrying on the fight against injustice by continuing to live in the Quilombos, maintaining their traditions and fighting for their land rights. One young woman tells Abrams, “We no longer fight with knives…but we are still fighting.”

Struggles over land ownership have led to a host of other problems. Quilombo residents want their children to get an education, but cannot afford to send them to cities and refuse to leave their homes for fear of losing their land. Commercial farmers are taking land, often under fraudulent means, and companies often claim land in the rain forests without formal or legal opposition.

In addition, some residents have left the communities for city life. Abrams examines how the Quilombos are split between those who follow the old ways and those who wish to integrate into mainstream Brazilian society. Most Quilombo residents still live in mud houses, grow their own crops, hunt, fish and make their own instruments, but the loss of land and accompanying urban migration have put a strain on the communities. As residents come back to the Quilombos, they bring with them television and new music, which some older residents view as undermining their cultural identity.

The documentary features outstanding footage of festivals, parties and religious ceremonies. Tambor da Criola, Bumba Meu Boi and Carimbó are among the traditional music and dance forms practiced in the Quilombos during slavery. Macumba and pajé are religions from the area which, along with festivals like those of Santa Filomena and São Benedito (also known as Festivals of the Mast), demonstrate the syncretic relationship between African animism, Catholicism and native Brazilian spiritualism, often by honoring Catholic saints alongside African deities with locally created rituals. This amalgamation of beliefs, similar to that found in Haiti and Cuba, permeates many aspects of Afro-Brazilian life today, particularly Quilombo communities. As one Quilombo resident says, “There is nothing sacred sacred and there is nothing profane profane.”

Unfortunately, narrator Chuck D’s punchy delivery of the script and mediocre pronunciation of the Portuguese words are an unwelcome distraction. Quilombo Country would benefit from commentary that ties together the challenges facing the regions featured in the three sections of the documentary.

Notably absent are the perspectives of other Brazilians, elected officials or not, who could comment on the legal disputes and how the Quilombos are viewed from within the government. Similarly, it would be good to hear from some of the nearby urban residents, who have assimilated many of the communities’ traditions, talk about whether they support Quilombo struggles for landownership.

Quilombo Country brings to light the concerns of a segment of Brazil society, which, though small, has greatly influenced Brazilian culture. The film makes it clear that the Quilombos” fight for land rights and legal recognition is integral to saving a living culture from extinction.