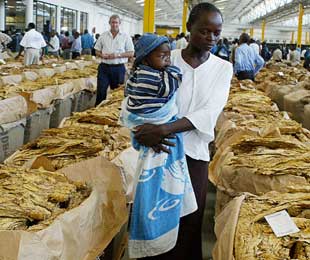 A worker inspects bales of tobacco at one of Zimbabwe's tobacco auction floors in April.

The global footprint of a deadly crop

The past decade has seen a remarkable shift in the way Americans view cigarette smoking. Since the massive tobacco litigation settlements began in 1997, the federal government has phased out support for tobacco farming, states and cities have enacted public smoking restrictions, and the number of smokers has steadily declined.

Meanwhile, the tobacco industry’s manipulative advertising tactics have become part of the cultural lexicon. In the 2005 big screen satire Thank You For Smoking, the film’s protagonist–a “morally flexible” tobacco lobbyist–admits, “I earn a living fronting an organization that kills 1,200 people a day.”

With Hollywood now taking jabs at its one-time co-conspirator, it’s no wonder that the Centers for Disease Control found that 70 percent of the current 45 million adult smokers in the United States want to quit. While slightly less than half will succeed, the mere desire offers hope that cigarette smoking in America could one-day go the way of trans-fats or MSG.

Such logic, however, does not extend to the tobacco manufacturers themselves. The multinational tobacco corporations have moved their production and marketing efforts overseas, causing experts to predict that by 2010, 87 percent of the world’s tobacco will be grown in the developing world.

Since the ’60s, global production has doubled and 33 million people work cultivating tobacco to serve the world’s 1.2 billion smokers–one-fifth of the world’s population. Meanwhile, according to conservative estimates by the U.N. Food and Agriculture Organization, since 1997 consumption has increased at an annual rate of 1.7 percent in developing countries, meaning people there will smoke 71 percent of the world’s tobacco by 2010.

Without even factoring in the paper wrapping, packaging and print advertisements–which require as much paper by weight as the tobacco being grown–nearly 600 million trees are felled each year to provide the fuel necessary for drying out the tobacco. That means one in eight trees cut down each year worldwide is being destroyed for tobacco production. In South Korea and Uruguay, tobacco-related deforestation accounts for more than 40 percent of the countries’ total annual deforestation. While in Malawi, in a region where only three percent of the farmers grow tobacco, nearly 80 percent of the trees cut down each year are used for the curing process.

Such a rapid depletion of trees in an already semi-arid climate will lead to desertification. Parts of Uganda are currently losing much of their arable land as the topsoil erodes.

Yet farmers in developing countries continue to grow tobacco because of the tremendous financial incentives from multinational corporations like Philip Morris and RJ Reynolds. With enticements such as farming supplies or a guaranteed foreign exchange for their crops, farmers are reluctant to use their land for anything else.

Even when some corporations try to boost their green reputation by offering to replant trees on excess farmland, most tobacco farmers use what little land is left to grow food for their families. Moreover, were farmers to stop growing tobacco and only grow food crops–as the Yale University School of Medicine proposed more than a decade ago–10 to 20 million of the world’s current 28 million undernourished people could be fed.

Aside from land erosion, deforestation also affects the atmosphere, by raising the level of carbon dioxide emissions responsible for global warming. Scientists affiliated with the climate research group Global Canopy Programme in England have reported that the 51 million acres cut down every year account for nearly 25 percent of heat-trapping gases. By that standard, the 9 million acres being deforested annually for tobacco production account for nearly 5 percent of greenhouse gas emissions.

In the United Kingdom, people throw away 200 million butts and 20 million cigarette packages every day, some of which end up on the street. According to the Tidy Britain Group, cigarette butts make up nearly 40 percent of litter.

Since the filters found in most cigarettes are comprised of 12,000 plastic fibers, they are not biodegradable and can take up to 15 years to break down. Meanwhile, the leftover tobacco releases toxins into the surrounding environment.

According to Californians Against Waste, cleanup of cigarette litter costs taxpayers billions of dollars each year. Even more costly are the losses incurred from fires started by carelessly discarded cigarettes. Not only are they a major cause of forest fires–destroying wildlife and ecosystems–but they are the leading cause of fatal fires in the United States, killing more than a thousand people annually. The tobacco industry is fully capable of selling fire-safe cigarettes–wrapped with several thin bands of less-porous paper that act as “speed-bumps” to slow down a burning cigarette–but it only does so when forced by a state government. So far, only four states have such a mandate in place.

The deadly impact of cigarettes as post-consumer waste is one side of the story. Before being rolled and packaged, the tobacco leaf subjects humans and wildlife to numerous health hazards.

Since it is a particularly sensitive plant, tobacco often requires 16 applications of pesticides during the three-month growing period. In developing countries, where environmental laws are absent or not enforced, chemicals like DDT and dieldrin–both banned in the United States–are sprayed on the tobacco.

These pesticide applications often harm animals that live or feed near them, causing loss of biodiversity or genetic mutations. And runoff and leaching during a rainstorm carry the pesticides into waterways and aquifers, thereby contaminating the drinking supply.

Since tobacco farming requires an estimated 3,000 hours of work per year per hectacre–astonishing when compared to the 265 hours needed to produce maize–field workers endure long hours of exposure to these harmful pesticides. To make matters worse, most farm workers are in subtropical climates, where an extra layer of clothing–even if it’s for protection–could result in heatstroke. It’s no wonder that pesticide poisoning is almost exclusively a problem in the developing world, where an estimated 25 million poisonings occur each year.

Popular pesticides used on tobacco crops, such as acephate, cause twitching, headaches, salivation, diarrhea, difficulty breathing and death. A study conducted by the University of Rio Grande do Sul, one of Brazil’s largest federal universities, found that the suicide rate among Brazilian tobacco workers between 1979 and 1995 was nearly seven times greater than the national rate. They also discovered that the occurrence of these suicides corresponded with pesticide sprayings, harvests and preparation for the next year’s crop (the study admitted that its findings were not conclusive, as workers’ depression might also stem from their often insurmountable debt).

Even without pesticides, farm workers are getting sick from the nicotine their skin absorbs while handling wet leaves. This condition has come to be known as green tobacco sickness (GTS) and its symptoms include nausea, weakness, abdominal cramps, and changes in blood pressure and heart rates. While its hard to estimate the number of people suffering from GTS, one study conducted on migrant workers in North Carolina suggests that 41 percent of tobacco handlers get the illness at least once during harvest season.

Exposure to the plant and its chemicals pose a greater threat to children, increasing the risk of cancer as well as damage to their immune and nervous systems. No figures exist on the number of child tobacco workers worldwide, but many tobacco-growing countries have a history of child labor.

The Norway-based Fafo Institute for Labour and Social Research is one of the only organizations in the world to investigate tobacco-production. After researching the use of child labor on African tobacco estates–which are strikingly feudal–Fafo found that 78 percent of the children of tobacco workers between the ages of 10 and 14 work either full or part time with their parents, performing all the tasks of tobacco cultivation.

The looting of natural resources, the destruction of ecosystems, and the poisoning and enslavement of people are all reasons to end our dependence on a product that is completely unnecessary to humans. Economic alternatives to tobacco production need to be encouraged, with the goal of eradicating tobacco as a cash crop.

According to the London-based Panos Institute, which specializes in development issues, “Many crops can grow in land that is now under tobacco–they include the majority of grain crops and vegetables. Sugar cane, bananas, coconut, pineapples and cotton could all be suitable.”

Since 1999, the Golden Leaf Foundation has used funds from the settlement with cigarette manufacturers to help farmers in North Carolina transition from a tobacco-dependent economy to alternative programs like goat farming. In this respect, other parts of the world could follow America’s lead.

The fight against tobacco consumption can be won with awareness and education. The industry has suffered a massive blow to its U.S. propaganda machine. Such attacks must continue throughout the world until smoking is not just looked upon as a poor personal health decision, but one that has deadly implications for all the world’s inhabitants.