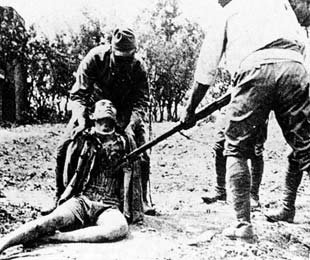 The Japanese military committed atrocities against chinese civilians in Nanking.

Finding Iris Chang: Friendship, Ambition and the Loss of an Extraordinary Mind explores the complexity of Chang’s psychology as it formed around the demands of her profession and her personal struggles stemming from her writing about The Rape of Nanking

Much has been made of the line between genius and madness. Throughout history, many of our greatest innovators, artists, rebels and revolutionaries have teetered between the two, often falling into deep, dark periods of debilitating depression, mania and paranoia. Some make it out of the abyss. Others do not.

One of those who met an ill fate was Iris Chang, the talented journalist who shot and killed herself in 2005 at the age of 36, leaving behind a husband and a 2-year-old son.

A new book by Chicago-based journalist Paula Kamen called Finding Iris Chang: Friendship, Ambition and the Loss of an Extraordinary Mind (Da Capo Press, November 2007) looks at the complexity of Chang’s psychology as it formed around the demands of her profession, her personal struggles, her culture and her fiercely determined personality.

A friend and colleague of Chang’s for nearly two decades, Kamen could not understand why a journalist with as much passion and talent would choose death over the personal and professional blessings of her life.

By her mid-20s, Chang had already cemented her reputation as an investigative reporter par excellence. A tireless, methodical writer who believed in nothing less than full immersion in her work, Chang’s subject matter was as varied as her temperament.

No issue resonated with her as deeply as the systematic atrocities committed by the Japanese military against the Chinese during the second Sino-Japanese War. Chang’s book on the subject, The Rape of Nanking, was published in 1997 to international acclaim. She documented in detail the sadistic sexual and physical violence inflicted by Japanese soldiers during the seven-week bloodbath in Nanking in late 1937 and early 1938, in which tens of thousands–some claim hundreds of thousands–of people were murdered.

Chang’s writing was filled with her outrage at the stories of Japanese soldiers grinning widely while holding up decapitated heads, throwing babies in the air only to skewer them on their bayonets and photographing Chinese women in obscene, pornographic poses of sexual humiliation prior to killing them.

Chang’s level of dedication was well known. Lesser known was the degree to which her research wounded her to the core, first exacerbating what was later revealed to be a bipolar disorder that, in tandem with severe hormonal fluctuations related to infertility treatments and miscarriages, eventually spun into a paranoiac psychosis.

Kamen’s book is a multifaceted exploration of her friend’s life and death. It does more than shed light on a complex woman, activist and journalist; it also places Chang’s struggles in the context of the secondary trauma experienced by journalists, artists and activists who seek to unearth and confront ugly truths.

“To write on social justice, one must have a certain degree of sensitivity, passion and empathy toevenbe motivated in the first place,” Kamen says.”But then if the person is too sensitive, of course,he or she can get bogged down by the darkness of their subject matter.”

Kamen continues: “An asset and a problem with Iris Chang was that she really felt the injustice of what she was writing about, from the unrecognized victims of the Nanking Massacre to the Bataan Death March vets she interviewed in her last few years. Many others have known, of course, about these atrocities, but her inner passion helped drive her to actually do something about it, and face daunting opposition. But a problem is that because she did have too few filters, she didn’t know when to stop.”

Like Chang, journalists engaged in difficult work–ranging from war correspondents to investigative reporters who dedicate months, even years, to stories–are often ill-prepared to handle the accompanying stress of what can be called “secondary trauma.” Regardless of profession, many of us are unwilling (or unable) to look the other way in the face of war, rampant poverty, sexual violence, mass incarceration, the preventable epidemics of infectious disease and so on. The logical outcome is that we start to suffer feelings of sadness, hopelessness or despair. To do otherwise would require a level of detachment that, in itself, might be more troubling than anything else.

As psychotherapist Gary Greenberg wrote in an essay in the May 2007 Harper’s, “[T]hese days my native pessimism was feasting on a surfeit of bad news–my country taken over by thugs, the calamity of capitalism more apparent every day, environmental cataclysm edging from the wings to center stage.”

This concept that individual mental suffering can, indeed, be closely linked to our social and political environments, is at the center of clinical psychologist Bruce Levine’s new book, Surviving America’s Depression Epidemic: How to Find Morale, Energy and Community in a World Gone Crazy (Chelsea Green). Levine is a longtime critic of the marketing and manipulation of mental illnesses by Big Pharma. For Levine, the extent of mental suffering in the United States is not in question. What is questionable, Levine says, is the notion that depression is disconnected from the political economy and from the meaninglessness of a self-absorbed consumer culture.

Levine criticizes the notion that depression can simply be medicated away with adjustments in serotonin and/or dopamine levels. Levine also sets his sights on the idea that happiness can be bought, even the idea that happiness is a desirable state of being. From this perspective, it’s not hard to see that while states of ecstasy, love and joy are one thing, our society’s relentless “be happy” sloganeering is devoid of any real meaning or lasting application.

“All stigmatizing of frightening natural human experiences is good for a consumer culture,” says Levine, “because labeling something as weak, sick or diseased results in buying of more products to shut down that experience, or divert or distract ourselves from it.”

In a world plagued by social ills, Levine argues that insisting on normative happiness alienates us from each other to an even greater extent.

Chang’s shame of seeming less than perfect in the eyes of her colleagues and loved ones–and of feeling intense personal pain about the cruelty contained within the human experience–had a great deal to do with the ultimately deadly cloak of silence that she drew around herself.

Her work forced her to stare directly at the human capacity to inflict horror on others. One can only hope that her death sparks the realization that no matter how strong, dedicated or talented, not a single one of us is equipped to bear this world’s madness on our own.