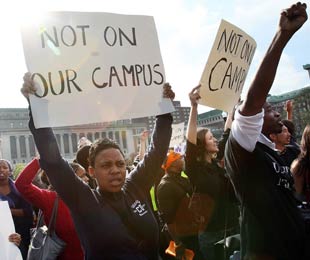 Protestors rally at Columbia University in New York on Oct. 10--a day after black professor Madonna Constantine discovered a hangman's noose on her office door.

The noose, that symbol of American racism associated with the Jim Crow South, is making a comeback.

Following the notorious Jena, La., incident, a rash of noose-related hate crimes has surfaced around the country, at times in the unlikeliest of places. These cases are not aberrations, but part of an endemic problem.

For African Americans, the noose symbolizes racial intimidation, violence and death–and with good reason. “The noose is among the most repugnant of all racist symbols because it is itself an instrument of violence,” noted Judge Robert L. Carter, a black federal district judge, in Williams v. New York City Housing Authority. In this 2001 employment discrimination case, African-American public employees were subjected to a hostile work environment, including the hanging of a noose.

Lynching has been America’s own form of domestic terrorism, columnist George Curry wrote recently in the Philadelphia Inquirer: “Far from being merely a prank, the hanging of nooses harks back to a shameful period in American history. It was not until 1952 that the United States went a whole year without a single lynching.”

Mark Potok, a staff director at the Southern Poverty Law Center, which tracks hate crimes and hate groups, thinks the current noose hangings are a reaction to Jena. “What the nooses represent is a wider and deeper backlash by whites than people recognize,” he says. “White people think the events in Jena were whitewashed by an evil and politically correct press.”

To track these hate crimes, DiversityInc magazine has initiated “Noose Watch,” which catalogues incidents of what it calls a “dangerous racist trend.” As of Dec. 5, it had collected information on 61 incidents that have occurred since the beginning of 2006. (The New York Times reports that 50 to 60 noose incidents have occurred since the large Sept. 20, 2007 rally in Jena) Most recently:

According to the Southern Poverty Law Center, the number of hate groups in the United States shot up from 602 to 844 between 2000 and 2006–an increase of 40 percent. The group also found that, based on 2005 Department of Justice data, about 191,000 hate-crime incidents are reported each year. The U.S. Equal Employment Opportunity Commission is handling an increasing number of noose cases alone: 24 since 2001. The number of reported workplace racial harassment cases increased from 3,075 in 1991 to 6,000 in 2006.

“The display of nooses does occur anywhere,” says Lewis Steel, a civil rights attorney at Outten & Golden in New York City. “African Americans who are exposed to this are infuriated by it. It rubs a nerve, whereas with white people it is just not in their experience.”

Steel is representing black and Latino employees in a lawsuit against the New York City Parks Department for racial discrimination and practices–including multiple displays of nooses on city property. He says that combating these incidents in the employment context depends to a large extent on the leadership of the employer.

“Certainly when we originally started the Parks Department case, [former New York City Parks Commissioner Henry] Stern viewed the display of nooses as silly,” Steel says. “He did not send a memo around, and no action was really taken against those who displayed them.”

Similarly, Reed Walters, the district attorney of LaSalle Parish, La., who prosecuted the Jena Six black teens for a schoolyard brawl with a white classmate, reacted to the hanging of the nooses at Jena High School by telling black students they were making too much of the “prank.”

Many black Americans think government officials are treating these noose incidents too lightly.

On Nov. 3, hundreds of people marched in Charleston, W.V., in support of Megan Williams, a 20-year-old black woman whom authorities say was kidnapped, tortured, beaten and raped by six white men and women in a trailer over the course of a week. Williams’ captors also allegedly forced her to eat rat, dog and human feces, and placed a noose around her neck. The six suspects, who were arrested and charged with kidnapping, sexual assault, malicious wounding and battery, have not been charged with hate crimes.

“They just kept saying, ‘This is what we do to niggers down here,’” Williams told the Associated Press.

On Nov. 16, thousands of community activists, led by the Rev. Al Sharpton, marched at the U.S. Department of Justice demanding that the federal government more vigorously prosecute crimes of racial violence.

“When you hang up a noose, it’s no joke to us,” said Sharpton at the march. “Every noose that’s hung should be prosecuted by the law. And we’re going to demand that today.” According to Sharpton, the federal government has relinquished its responsibility to protect civil rights by relying on states to address hate crimes, something he characterized as a “revival of states’ rights.”

In response to the march, Attorney General Michael Mukasey issued this statement: “In recent months, there have been reports of nooses and other symbols of racial and religious hate appearing in schools, workplaces and neighborhoods across the country. These symbols of hate have no place in our great country. … Although there are limitations and challenges in bringing successful hate crimes prosecutions, the department takes each case seriously and is prepared to vindicate the rights of the victims when prosecution is warranted by the facts and by federal law.”

Sen. Hillary Clinton (D-NY) has said that “for too long, the Department of Justice failed to confront the serious questions of injustice, inequality and intolerance raised by the troubling events in Jena.” She advocates restoring professionalism to the Civil Rights Division of the Department of Justice, and calls for strengthening the hate crimes laws and voting laws.

In a letter to Mukasey, presidential candidate Sen. Barack Obama (D-Ill.) wrote, “Unfortunately, this administration–and your predecessors as attorney general–have a poor track record in the area of investigating discrimination against racial minorities, while inexplicably focusing resources on a few, exceptional cases involving white victims.”

Meanwhile, Steel, who has used the legal system to wage the fight against noose-related hate crimes, thinks that community organizing is needed to get the attention of people in power and bring about change.

But why are these racially motivated crimes on the rise at this point in time? Potok suggests that the recent noose incidents reflect not a fringe phenomenon, but a major social problem. “We’re looking at an upsurge in racial nationalism,” says Potok. “What’s going on is a serious backlash against globalization. You have a certain level of economic rage that provides fertile ground for these groups.” He says that with more people of color immigrating to the country, “whites are angry and uneasy.”

According to Potok, these whites who are scapegoating think, “Our country is being stolen from us. The country my white Christian forefathers built is being taken away.” But on Democracy Now!, Malik Shabazz, a member of Black Lawyers for Justice, said: “The hanging of nooses is a sign that there [could] be real bodies under those nooses very soon.”

The “Outside Agitator” Is a Myth Used to Weaken Protest Movements