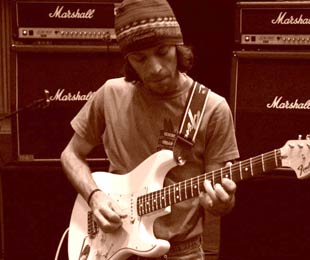 Iran’s underground music scene has more followers than ever, largely because Iranian musicians are performing on a new stage: the Internet

At a 2001 rock concert in Tehran, Iran, members of the alternative rock band O-hum wore jeans and T-shirts. Some of them had mop tops. The lead singer jumped around with his bright red guitar as young girls screamed and boys climbed onto the stage before jumping off and body surfing the crowd.

O-hum, which means “illusions” in Farsi, was at the forefront of the Iranian underground music scene, building a voice of dissent and a refuge from the rigid censorship of the cleric-run government. The 2001 concert was O-hum’s first in Iran–and one of its last.

Amir Hamz, a German of Iranian descent, chronicles O-hum and seven other Iranian groups from the country’s evolving underground music scene in his documentary, Sounds of Silence. The film, which was shot in 2004 during two weeks in Iran and a few days in London, has been screening at international festivals for the past year. It features the artists who have turned to the Internet to distribute the music that Ayatollah Khomeini banned in 1979, saying, “It destroys our youth who become poisoned by it.” Despite Khomeini’s words, the government’s cultural censors–called Ershad–didn’t begin cracking down on live performances of young Iranian musicians until 2001 as bands like O-hum found success.

Since the 1979 Iranian revolution, artists have struggled under the constraints imposed by Ershad, officially called the Ministry of Culture and Islamic Guidance. The government created the agency to enforce adherence to strict theocratic principles. As revolutionary fervor died down in the late ’80s, so too did the government’s regulation of music. And although many laws remained in place–such as the ban on women singing–the Iranian government did not enforce many of the restrictions, especially during reform-minded President Mohammad Khatami’s tenure from 1997 to 2005.

Such strain has forced many artists and bands to break apart. O-hum lost Izadkhah and bassist Babak Riahipour early in 2003. Lead singer Sharbaf said he understood the pressures: “I agree that nobody could waste his time and energy with something so unsure and so unstable,” he told Iran’s online alternative music magazine Zirzamin.se in February 2006.

Yet Iran’s underground music scene has more followers than ever, largely because Iranian musicians are performing on a new stage: the Internet. In upper-middle-class areas such as northern Tehran, the indy and electronic rock scenes have attracted young audiences since the late ’90s. This and other communities of music lovers in Iran have created websites and blogs, as well as turned to social networking sites such as YouTube and MySpace.

Iran’s population is young–almost 65 percent is under 25–and many are Web savvy. About a quarter of Iran’s population uses the Internet, higher than the 17 percent average for Middle Eastern countries, according to Nielsen/Net Ratings.

When the government tightened its grip on artistic expression, pushing dissent to the Internet, the country’s art began to gain more international attention, allowing a community of artists and activists to thrive. Similar to the phenomenon that helped propel Iranian films like Bahman Farmanara’s A Little Kiss to international acclaim, the Iranian music scene is finding a new audience.

In Sounds of Silence, one of the most profound voices belongs to Mohsen Namjoo, a graying 30-year-old who was profiled this year in a Sept. 1 New York Times article under the headline, “Iran’s Dylan on the Lute, With Songs of Sly Protest.” A virtual renaissance man–he has studied music, theater and poetry at universities in Tehran–Namjoo relies almost exclusively on the Internet to carry his message throughout Iran and the world. In September, some 1.6 million people watched his videos on YouTube, and he has participated in all three annual online music festivals sponsored by Tehran Avenue.com, a blog and news site about the culture and art scene in the capital city. Namjoo has yet to give a public concert in Iran, but unlike many of his peers, he is hopeful. “What belongs to us is an apologetic government,” he sings on “Neo-Kanti.” “What belongs to us, maybe, is the future.”

Blogs have given oppressed groups, such as LGBT folks and many women, as well as political dissenters, a platform to write–albeit anonymously–about daily life in Iran and to air grievances. But these blogs represent only a portion of the population and hardly amount to a political uprising.

Hossein Derakhshan wrote for reformist newspapers in Iran in the ’90s, and in 2001 created the first Iranian blog called Editor: Myself (hoder.com), which covers politics and life in Iran. He likens blogs to think tanks, nonprofits and academic groups that want to affect policy. “Blogs in Iran have had some sort of similar effect on a very limited number of people, but influential people.” But this influence is fading fast as Iran’s censors have begun to block blogs–including Derakhshan’s–from public access.

Sounds of Silence’s Hamz admits the vast majority of Iranian youth are content with Western pop, electronica and Persian pop music from Tehrangeles (the nickname for the approximately 600,000 Iranians living in Los Angeles). “They [Iranian youth] are victims of the Western media,” says Hamz, “because they receive everything through satellite TV.”

But websites like TehranAvenue are trying to bring together like-minded Iranian youth who are disenchanted with the existing conditions. Through its annual music festival, TehranAvenue allows musicians to share music that their website says “speaks truth to aesthetic sensibilities of a particular culture while maintaining its link to global realities.”

In the face of Ershad, it is artists like Namjoo who are preserving Iran’s culture by exploring the past to help decipher the present and plan for the future. In an interview with Zirzamin.se, he said, “The future is connected to the present. By writing, playing and composing songs, by recording and performing them in public, we make that future.”