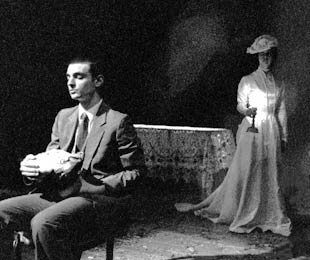 The cover image of Pablo Helguera’s book, The Boy Inside the Letter, a coming- of-age kunstlerroman.

Portrait of the Awkward Artist

If Pablo Helguera’s The Boy Inside the Letter (Jorge Pinto Books, 2007) had adopted a subtitle, it would have to be “Longing: The Making of an Artist.” As it stands, the title is enigmatic, never hinting at the great waves of yearning inside. It suggests youth and writing–but there’s something vaguely uncomfortable about it. Is the “letter” a correspondence, a nod to a young man whose true self is hidden in some sort of written exchange? Or is the boy inside an alphabetic letter, a mysterious glyph to be deciphered?

As it turns out, it’s both. It’s a correspondence that Helguera writes as a young man to his older self–a symbolic universe itself to be decoded and appreciated by both the writer and his readers. And what they reveal is a coming-of-age story, a kunstlerroman, an artistic emergence.

The arc of The Boy Inside the Letter is novelistic, with its action almost entirely internal. But what is most striking about Helguera’s story is its savage vulnerability. It is as much about dislocation, unrequited love and the pursuit of identity as it is about the formation of a creative soul.

Helguera, a Mexican-born visual and performance artist, is director of Adult and Academic Programs at the Museum of Modern Art in New York. His own work ranges from experimental symposiums, recordings, exhibition audio-guides, publications to ambulatory museums, and it takes on subjects as varied as the Shakers, dead languages, Latin American soap operas and unrest.

In interviews, Helguera has suggested The Boy Inside the Letter is nonfiction. Much–though not all–of the manuscript consists of diary entries, translated from Spanish, from his years in art school (both high school and college), from when he was 17 to 22. These entries document his journey from Mexico City to Chicago to Barcelona, back to Chicago and, at least briefly, to Mexico City again.

His story begins in Mexico, when as an adolescent in his comfortable middle-class home, he explores his family’s myths, learns to love classical music, and finds himself as comfortable with writer Octavio Paz as with Spider-Man:

As He grows up, (his brother) Nacho starts to teach him chess and they make up imaginary tournaments using Ken action figures as imaginary contestants that they rename Chejov and Igor (as in Igor Stravinsky). Every now and then, national figures emerge in the tournaments, including Juan Rulfo, Alfonso Reyes and El Poeta. All these writers, composers and artists are larger-than-life characters, and like superheroes, they never die. He ends up naming them Los Inmortales.

Eventually, he enrolls in an art school, surrounded by other young art aspirants, and falls madly, irrevocably in love. But his efforts are futile. No matter what he does, Fuensanta rejects him, each time more harshly. But Helguera is undaunted, compelled. He sends her a rose, puts letters in her bag, regales his friends with a constant monologue about her, has a pal scream her name in a school courtyard and sends her more flowers. Were he not so utterly romantic, so tragic and sentimental–or perhaps merely in the United States instead of Mexico–his behavior could be considered dangerous.

“Love is unfair,” he writes, “a very strong passion doesn’t always generate a similar passion but instead it can generate rejection, a kind of rejection that could generate more passion.”

He knows he’s being self-destructive but he can’t help it. He keeps at it, even when he knows his actions will only guarantee catastrophe. It’s his own perverse way of being true to himself.

Some variation of this will play out with nearly every girl he encounters, but refreshingly, and perhaps just plain honestly, Helguera doesn’t get the girl. He stumbles through these one-sided affairs with the same intensity as he attacks his ambitions to be an artist. He wants desperately to say something, to have a message. But what?

In Mexico, he is afraid to be trapped in the kind of art pedagogy that’s so respectful of the country’s glorious past that it can barely nod at the future.

At the Art Institute in Chicago, Helguera is drawn to political art but repulsed by its lack of formal technique, by its literalness and raw qualities. There he’s generally viewed as a Mexican but perceived as alien–Chilango one minute, European the next. He’s even vaguely French when working at the Mexican Fine Arts Center Museum in Chicago’s Pilsen neighborhood. Crazily, he learns about Mexican art from a white, Wisconsin-bred professor who’s encyclopedic about the subject. It’s the same man, Robert Loescher, who suggests the title of the future book and that, perhaps, he might not be a painter. Helguera is unnerved. Maybe the problem is Chicago. So he goes to Barcelona. But things don’t gel there either. He misses Chicago, the Art Institute, Pilsen.

All along, Helguera’s writings reveal something quite wonderful between the youthful anxieties, unvarnished ambitions, sentimentality and angst about art and meaning. This is how a person emerges, not exactly through triumphs but through the way he or she approaches challenges and contends with failures.

We may read something from our past, see a photograph or remember a crush, and cringe with embarrassment. We may desire to push it away, to deny it ever had anything to do with us, but Helguera does the opposite: He embraces these awkward moments, these childish thoughts, these naked moments of doubt and fear and adolescent melodrama. The result is charming and revelatory.