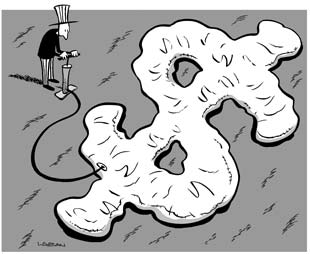 What you should know about the economic stimulus package

We hate to fulfill the stereotype of dismal scientists, but the news is bad: The economy is slowing sharply and may be in recession. The nation’s broadest measure of growth, real gross domestic product (GDP), grew a scant annual rate of 0.6 percent at the end of last year. Unemployment has risen, and job growth has slowed sharply. The housing market has yet to hit bottom, and credit markets are still deeply chilled, if not frozen.

Here’s the better news: When this type of scenario develops, the case for an economic stimulus package to offset the downturn is both simple and widely accepted. But there are many ways to craft a growth package, and if we don’t get this right, we risk wasting big money while failing to mitigate the pain of recession.

As In These Times went to press, both chambers of Congress had passed bills, and their ratification looked all but certain. (President Bush had signed off on the House bill, and had agreed to support the Senate’s package after it had been signifcantly scaled back.) The bills spend about $150 billion this year and next on a combination of “tax rebates” (though that’s really a misnomer) and business tax cuts.

Will that be good enough? Here’s a Stimulus 101 primer, as well as a list of what we think is missing from the current economic recovery plan.

Economies depend on robust demand. When folks stop buying, when investors leave the room, when governments stop building and improving public goods, growth grinds to a halt. And when that happens, the job machine stalls, unemployment rises, those with jobs work fewer hours, wages rise more slowly, and incomes decline, especially for the lowest earners and many minorities.

The last two recessions–in the early ’90s and early 2000s–led to declines in the typical family’s income by about $2,500 (in today’s dollars). That ain’t peanuts.

Such a potential income loss is especially worrisome now, as the inflation-adjusted median family income actually remains about $1,000 below where it stood in 2000. If recession is imminent, this would be the first time that real incomes at the end of a recovery have not exceeded those at the previous economic peak.

That fact might be the greatest indictment against Bushonomics and the “ownership society” he touted. It is a stark reminder that while the stimulus appropriately targets a short-term problem, the mechanisms that serve to fairly distribute income have been broken for some time. Most families in the United States have not fared nearly as well as they should have, given their contributions to the growth we’ve experienced. The coming slowdown will only submerge them in deeper water.

That’s what makes fiscal stimulus so necessary. By fiscal stimulus, we mean a temporary infusion of expenditures into the economy by the federal government to raise demand. The infusion necessarily takes the form of some combination of a reduction in taxes and spending increases.

We’ve also got more time than we think. Each of the last two recessions was short (eight months) in GDP terms, but far longer in terms that matter most to most people: jobs and unemployment.

Unemployment rose for 19 months after November 2001, which was the official end of the last recession, and employment declined by another 1.1 million and did not start growing until September 2003. Had an effective stimulus package come late in the game, as officially measured, it would have helped shorten what turned out to be the longest jobless recovery on record.

The president and the House agreed on a stimulus package that spends about $100 billion on personal tax rebates and $50 billion on business, by allowing them to depreciate new investments faster than usual, and thereby pay fewer taxes. (Firms can deduct the cost of depreciation from their income to lower tax liabilities.)

The package has some pluses, but it could have been much improved. Thanks to negotiations by House Democrats, $28 billion more of the rebates will reach 35 million more low-income persons than were included in the initial White House package. Under Bush’s original plan, only 8 percent of the rebate made it down to the bottom 40 percent. It’s now 21 percent. That gets money to folks who need it, but also helps because those folks will spend the money (rather than save it) and generate more demand.

But the bonus depreciation for businesses is a particularly ineffective form of stimulus. For each dollar of tax revenue we sacrifice in this way, we get back a measly 27 cents in new demand, according to economist Mark Zandi. Of the 13 types of stimulus Zandi tested, this one was the worst. (Making the Bush tax cuts permanent was, at $0.29, a close second.)

This package, while costing 1 percent of GDP, could boost the economy by less than 1 percent, perhaps around 0.75 percent. That’s unacceptable. We should get at least 1-for-1. Any stimulus worth passing should get back at least as much in GDP terms as it costs, and even that’s a low bar.

The Senate’s plan is a little better in this regard. While spending about the same amount on rebates, it gets them to even more low-income people. (Seniors dependent on Social Security were left out of the House plan.) But Senate Republicans blocked its originally proposed 13-week extension to unemployment insurance (beyond the normal 26 weeks), which offered a strong bang-for-the-buck: A dollar spent here gets you $1.64 in stimulus. The reason is simple: People unemployed long-term need money and spend money. That’s not always the case with rebates.

One thing the current stimulus package got right was making payments to individuals. But these are not “tax rebates,” which implies that the government is returning taxpayers’ money to people who overpaid their taxes. Rather, these are checks provided to people in the expectation that they will spend the money on goods and services.

Why is that helpful? Because as they spend these payments, they create demand. For instance, when you buy items at Costco, the store will restock its shelves and re-order goods from its suppliers, a process that maintains employment and wages being paid and spent, all of which boosts the economy. But, to energize the economy, these payments have to be spent, not saved. Better yet, they need to be spent on domestic items, as imported goods stimulate another country’s economy.

When the payments are spent domestically, their impact reverberates throughout the economy. The sooner income-constrained households receive these checks, the sooner these payments will help both the recipients and the larger economy, thus achieving the dual goals of both fairness and effectiveness.

However, failing to extend unemployment insurance was a big mistake. Such payments have the greatest probability of being spent, and the unemployment insurance system needs to provide a better safety net for low-income, part-time and other workers. Temporary improvements in food stamp allocations and greater assistance for energy bills would also have a similar positive effect.

Providing payments to state and local governments (for their Medicaid costs or otherwise) would also have helped mitigate rising unemployment. Downturns cause state revenues to fall and spending to rise, especially when they originate in housing markets. That’s because, as more people need assistance, public programs kick in. But when states need to balance their budgets, they often respond by raising taxes, cutting services and laying off workers–slowing down the economy even more. It’s necessary for the federal government to provide relief for the states to forestall these desperate moves.

Finally, though it’s received scant attention, one of the best things we could do is put Americans to work building or repairing needed infrastructure. Jobs spun off by these projects put goods in the pockets of workers who would otherwise struggle, and the improvements in roads, bridges, schools and sewage treatment facilities can lead to higher productivity, better health and better education. Given the depreciation of our public infrastructure, these efforts only accelerate what we need to do anyway. To be timely, we should invest in projects that are planned or underway, but strapped for resources due to the slowdown. Another advantage is that none of such spending is “saved”: While citizens may spend less than two-thirds of the payments made to them, governments spend all the money.

Though a recession has not officially been called, polls show that most people think we’re already in one. While this may be a head-scratcher for those focusing on GDP and financial markets, it’s clear to us that too many families have been economically squeezed in recent years, even in good times. Imagine what they are likely to face in bad times.

Our political representatives had every reason to quickly pass a package to jumpstart our slumping economy. But they didn’t get it completely right. It’s up to us to make sure they do.