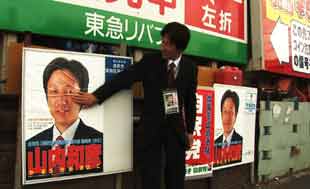 Kazuhiko Yamauchi shows off one of his posters in Campaign, a documentary airing this summer on P.O.V. on PBS.

P.O.V.: A Home For Homeless Films

P.O.V. is one of those occasional reminders that public broadcasting matters. Every year, like its complementary series Independent Lens, P.O.V. brings before national audiences the artists, perspectives and films that otherwise would find no home on television. The series’ programmers work with a host of partners to use the films as launch pads for serious discussions.

Started by a handful of ’60s media activists, the series – which stands for “point of view” – has evolved into a leading showcase for the best independent documentaries available internationally. Series Executive Director Simon Kilmurry says, “We celebrate the documentary filmmaker as an artist.” Each one of the 19 films in the series this year is worthy of attention, both for what it says and how it says it.

The series launches on June 24 with Traces of the Trade: A Story from the Deep North. It’s told by Katrina Browne, who is a member of one of the oldest families in New England, the DeWolfs, and who is also, like many of her well-educated relatives, a cleric. So when she discovers that her family’s wealth and station were created through the slave trade – and indeed that the entire economy of the region was anchored in the bloody traffic – it becomes a moral issue for her.

We travel to Ghana with Katrina and several other descendants of the slave-trading family, to the dungeons in which enslaved Africans spent their last days on their home continent. And we travel to American museums, where any notion that the North wasn’t fully complicit in the trade that fueled the South’s economy is thoroughly debunked.

But the most interesting part is watching DeWolf family members slowly owning the problem. Privilege is powerful, and some family members want to take refuge in the notion of their own merit; others want to flee from the sorrow of recognition; still others struggle with helplessness. But in the end, a family conversation begins – about taking responsibility for the reality of the past rather than gilding it over with myths. What could have been just another bath in liberal guilt becomes a frank and fascinating examination into the ways that the privileged make their peace with inequality.

Traces of the Trade has spurred provocative conversations at festivals between advocates and opponents of reparations, among whites, and between African Americans. Its TV debut could provide an opportunity for broader and deeper dialogue – at a timely moment, when the national elections have brought race back into focus.

P.O.V.’s documentaries are richly varied in style and substance, even when they focus on similar topics, such as elections. Consider director Katy Chevigny’s Election Day (July 1), which takes us to ground level during the day of the presidential election 2004, in venues as diverse as South Dakota and Florida. Chevigny’s well-established vérité style reveals the profound stake that citizens across the country have in the voting process.

Director Kazuhuiro Soda’s Campaign (July 29) whisks us to Japan, where we follow the campaign of a nowhere man who fronts for the ruling party and whose fate reveals not only the venal nature of institutional politics, but also their human cost.

This season also showcases two films with distinctly different takes on healthcare. Critical Condition (Sept. 30) is about what it means to be one of the 47 million Americans without health insurance. Director Roger Weisberg, a veteran television producer who regularly takes on tough topics, such as American inequality, doesn’t just put a face on this issue – he brings in the whole body. In the tradition of journalist Edward R. Murrow, Weisberg tells truths that afflict the comfortable, couched in fundamental American values of fairness and accountability.

Far from that journalistic approach, director Joanna Rudnick, a member of the Kartemquin Films group (Hoop Dreams, The New Americans), tells a personal story of cutting-edge dilemmas in medical care with In the Family (Oct. 7). Rudnick has been diagnosed with a gene that predisposes her to breast cancer. Should she opt for pre-emptive surgery or hold out to have a baby before protecting her own future?

P.O.V. also brings to its American audience a remarkable range of international documentaries. Among my favorites of P.O.V.’s international selections is 9 Star Hotel (July 22), a simply made but riveting work. Israeli director Ido Haar followed Palestinian workmen who sneak across borders to work on the construction of an Israeli settlement in Palestinian land, and gives us a gritty insider’s look at their lives.

They consider themselves lucky to have work, and regret that soon they’ll no longer be able to risk prison or death to get to work because, within months, the wall dividing Israeli from Palestinian will make sneaking across impossible. The camera stays with them, sometimes jerkily, through raids, police chases, working days and evening fireside gossip.

Once back in the abandoned container they call home during the week, they talk about employers, girlfriends and rumors of the good life in Jordan. This simple chronicle of the terms of work for the Palestinian poor is filled with sharp ironies, and the director wisely chooses to let us discover them for ourselves.

Another must-watch is Up the Yangtze (Oct. 14), Canadian director Yung Chang’s eye-opening look at Chinese modernization through the eyes of a teenage worker on a luxury riverboat. (I celebrated this film when it debuted at the Sundance Film Festival in January, and it’s thrilling to see it on television so quickly.)

Two other international documentaries are worth a look this summer. Belarusian Waltz (Aug. 12) is director Andrzej Fidyk’s look at brutal Belarus politics through the lens of an outrageous protester against despotic rule, who uses comedy and street theater against a dictatorial state. Meanwhile, The Judge and the General (by directors Elizabeth Farnsorth and Patricio Lanfranco, on Aug. 19) chronicles the story of the judge who tried Chilean dictator Augusto Pinochet.

P.O.V. isn’t only a terrific case for public television, it’s also a great case for owning a digital video recorder. Like much of the public television programming that’s chewier than, say, “Antiques Roadshow,” P.O.V. is not always programmed at the most convenient time for viewing. In some places, the series isn’t carried at all. And public TV rarely runs repeats. (Hello, take a lesson from HBO!)

This season, P.O.V. will re-broadcast some of its more popular hits – - Lomax the Songhunter (Sept. 2) about the musical preservationist Alan Lomax – as well as revive a classic – - Johnny Cash: The Man, His World, His Music (Aug. 5), fresh from 1969, the same era that brought us Don’t Look Back and Gimme Shelter.

Mark your calendars, set your DVR or VCR, and bookmark the P.O.V. website – where, by the way, you can also comment on each of the films and talk with others about them.