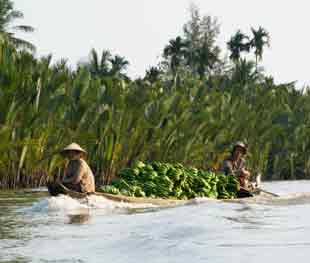 On the Trail of Atrocity in Vietnam

No one will ever know how many U.S.-perpetrated massacres took place in Vietnam. Nor how many hamlets were decimated by bombings. Nor the number of villages laid waste by artillery strikes

As I watch beads of water trickle through cracks in the hull of the 20-year-old, rough-hewn sampan chugging down the Huong Diem River, I begin to think about how I came to be a war crimes hunter. Here, deep in Vietnam’s Mekong Delta, accompanied by my wife, photojournalist Tam Turse, and our translator, I’m on a mission to seek out and record the stories of the forgotten victims of what is appropriately known here as the “American War.”

I’ve been researching U.S. war crimes in Vietnam since 2002, when I first located a collection of U.S. war crimes investigations documents – compiled by a secret U.S. Army task force in the 1970s – at the U.S. National Archives. After writing my doctoral dissertation from those files, I traveled to Vietnam in 2006 as a freelance reporter for the Los Angeles Times to track down witnesses and survivors of a few cases. That trip spanned only a couple weeks.

But this trip in early 2008 – field research for my forthcoming book Kill Anything That Moves – lasts a couple months.

Traveling by airplane, car, motorbike, ferry boat, barge, fishing boat, motorized sampan and often on foot, we trek far off the beaten track – past verdant green rice paddies that stretch out as far as the eye can see; into fields that double as mass graves; down roads that collapse into thin dirt footpaths or the one, on a tiny island off the coast of central Vietnam, which suddenly vanished into sandy beach, stranding the car until we pushed it free.

Along the way, we sought out people who haven’t seen a Westerner since the war and those whose stories are unknown beyond their own villages.

We’re here to make sure the voices – and, courtesy of Tam, the faces – of these people are not lost to history. We’re here to document the hidden, if not forbidden, history of the “Vietnam War,” untold in most mainstream U.S. histories. We’re here to record grim testimony of near-constant artillery shelling, of homes turned to ash by napalm, of orchards and gardens decimated by chemical defoliants, of farming families forced to live in their fields because of constant aerial bombardment, of wives and husbands, sons and daughters, fathers and mothers, sisters and brothers maimed and killed by fragmentation grenades, rifle fire and helicopter gunships. And we’re here to track down massacres.

A scene of horror

We visited massacre sites from Quang Tri – the northern-most province in what was once the Republic of Vietnam (“South Vietnam”) – to the deep south of the Mekong Delta. But we spent the bulk of our time in the central part of the country – provinces that had the highest concentration of U.S. troops, such as Quang Ngai, the site of the infamous My Lai massacre.

In another of the central provinces, Quang Nam, we headed to Le Bac hamlet. I had long suspected something very dark happened there.

During the war, the Liberation Press Agency – the communications wing of the Provisional Revolutionary Government (PRG) – reported that U.S. Marines “shot 38 persons[,] mostly women and children[,] in Le Bac hamlet, Quang Nam Province on April 15, 1970.” Only weeks before those alleged killings, Marines had carried out a massacre in a neighboring district.

In his book, Son Thang: An American War Crime, Gary Solis, a war crimes scholar and veteran of the war, laid bare the details of that massacre – of 16 unarmed women and children at Son Thang – by a Marine Corps “killer team.”

Only after a group of Vietnamese complained about the deaths to Marines based near the hamlet did the Corps launch an investigation into the killing of civilians in Le Bac. The Marines eventually claimed, according to press reports at the time, that an unspecified number of civilians had indeed been killed, but that it could not be ascertained if they were killed by the Marines.

An official Marine Corps history, produced later, states that “Company B, 1st Battalion, 5th Marines engaged enemy troops near Le Bac (2) … The company called in jets and Cobra gunships; a dozen enemy troops died in the action, but so did about 30 people in the nearby hamlet.”

In 1971, during the Paris Peace talks, the PRG gave U.S. Rep. Robert L. Leggett (D-Calif.) an awkwardly translated copy of the Vietnamese document that provided information for the Liberation Press Agency broadcast. He, in turn, sent a copy to the Pentagon, which I found in the Army’s files. The typo-ridden source mentioned a survivor – a young girl named Hoang Thi Ai. Locals informed us that Hoang was not a hamlet surname, but pointed us to a woman named Ho Thi A who lived in Le Bac as a child.

She said she remembered Marines entering the hamlet on March 10, 1970, on the lunar calendar – the equivalent of the solar date of April 15, 1970. She recalled civilian deaths, too – but not the way the Marines claim they occurred. Just 8 years old at the time, Ho Thi A said she was playing in her home that morning when the aerial assault began. People ran for their bomb shelters and waited out the attack. When the bombardment ended, U.S. troops entered the hamlet on foot and people scrambled from their bunkers, fearing the Americans would throw grenades inside.

“There were three of us standing at the entrance to the bunker: me and two old women – my neighbor and my grandmother,” Ho Thi A said. One of the American troops was standing only 15 feet away when he fired. “Miss Chay was shot dead,” she said. “Then he shot my grandmother. She died too. At that moment I was so scared and ran into the bunker and hid.”

The U.S. troops threw grenades into her bunker, but because of its shape, she was shielded from the blast. Later, after the Americans left the area, she emerged just as local guerrillas, who had been hiding nearby, also appeared. She followed them to the front part of the hamlet. What they found was a scene of horror.

Lying at the entrance of a bunker were nine bodies – two families – who had been shot. All were women and children. All were civilians. In total, Ho Thi A said, Marines killed 15 people that day.

Only women and children

Ho Nam was a local guerrilla living in Le Bac and recalls March 10, 1970 (lunar) well. When I asked if he fought the Americans that day, he was incredulous. Most of the time he didn’t even carry a weapon, and American firepower was overwhelming.

But U.S. helicopters must have suspected armed enemy forces were around, he said, because they circled the hamlet and fired on it. Then came the jets and their “petrol bombs.” He took cover in a bunker during the air strike, as did other local people. After the bombardment ended, he said he ran and hid in a nearby field of tall grass, but women and children stayed behind as U.S. troops entered the hamlet. He returned later that day: “The first bunker where they entered the hamlet, they shot two people. Ho Thi A was in this bunker,” Ho Nam said. “She saw the old women were killed, so she hid in the bunker.”

“Then I came to the second bunker behind the house, there were two families who took shelter there – nine people. They were all shot dead,” he recalled. “Only children and women – the women were all only about 15 years old.”

At another bunker, his own mother was shot dead. He buried her and helped bury the others, as well. In all, 15 people were killed, he recalled.

Ho Nam still lives in Le Bac and led us a short way from his home to a nearby backyard. He showed us two burial mounds: one circular, the other a long, thin oblong mound – the graves of nine massacre victims, he said.

The Marines claim they were involved in a firefight with enemy troops that day. But all the Vietnamese we talked to said the “Liberation forces” were not in the hamlet. Only locals who couldn’t run easily – women with small children and the elderly – were there when the Marines arrived. While the Liberation Press Agency reported nearly 40 civilian dead, and the Americans admitted to 30, the Vietnamese recall 15. War crimes are a murky business.

Whatever the details, what is clear is that almost 40 years has not diminished the horror of the day for Ho Thi A.

The philosopher and writer Jean-Paul Sartre once wrote, “Our victims know us by their scars and by their chains, and it is this that makes their evidence irrefutable.”

Nick Turse, associate editor of TomDispatch.com, is the author of The Complex: How the Military Invades Our Everyday Lives (Metropolitan Books) and a forthcoming history of U.S. war crimes in Vietnam, Kill Anything That Moves (Metropolitan/Henry Holt). His website is NickTurse.com.