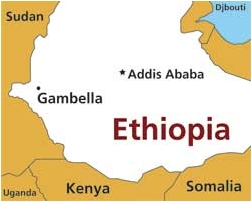 408 Anuak were massacred in Gambella on December 13.

BY Doug McGill
Share TweetReddit0 EmailPrint
On Saturday, December 13, in a single bloody burst of targeted mass murder, Ethiopia became the world’s latest sovereignty to attempt genocide as a way to solve its problems with a troublesome minority.

The United States, which gave Ethiopia $32 million in foreign aid last year, is investigating the massacre, in which eyewitnesses say uniformed Ethiopian soldiers were aided in the murder of more than 400 members of the Anuak tribe.

The charge is being made by dozens of refugees who live in the United States who spoke by telephone to surviving relatives. During the last decade more than 2,000 Anuak have settled in the United States after fleeing ethnic cleansing—said to be carried out by rival tribes backed by the Ethiopian government.

December’s massacre, by far the worst single-day killing of Anuak, was the first time Ethiopian soldiers were widely witnessed leading such an attack. It took place in Gambella, the capital of the state of Gambella in remote western Ethiopia, which shares a long border with Sudan.

According to eyewitnesses, the soldiers were joined by dozens of members of the Amara, Oromo and Tigray tribes who were seen chopping and stabbing Anuak with machetes.

Omod, an Anuak survivor, described what happened in a telephone interview: “About 300 uniformed soldiers marched into the town. They knocked on doors or pushed them down and pulled out all the men and the boys. Then they beat them on the street and told them to run. When they ran, they shot them. They killed my boy. He was a driver and they shot him in his car. I hid in the bush and I saw them beating people, shooting people and burning houses. We collected 403 bodies. They are in a mass grave.”

The Anuak have lived for centuries in a verdant western region of Ethiopia. There are active gold pits and oil reserves on the Anuak’s ancestral land, resources the Ethiopian government covets. Over the past decade the Anuak have pressed the factional government in Addis Ababa for a share in the projected development of these resources and have been answered in political subjugation, physical beatings and now the government-led pogrom.

It is a small genocide compared to those of the Turks, Jews, Cambodians, Tutsis and Bosnian Muslims, but it has all the markings of a state-sponsored attempt to extinguish an entire race.

Over the past decade some 20,000 Anuak have fled into refugee camps in northern Kenya (primarily the Ifo camp), and into southern Sudan. Until December 13, most of the killings of Anuak were by their ancient tribal enemies, the Nuer, many of whom have resettled on Anuak land as civil war refugees from Sudan. The United Nations runs three refugee camps in western Ethiopia for these refugees, most of whom are Nuer.

Anthropologists and missionaries say the Anuak and the Nuer in previous decades evolved ritualistic peaceful ways to solve grazing rights disputes that arose between their tribes. The displacement of more than 100,000 Sudanese civil war refugees onto Anuak land upset those traditional ways.

The Anuak for years have claimed that the Ethiopian government was using the Anuak-Nuer rivalry as its main tool for Anuak extermination, arming Nuers and de-arming Anuak and then standing by when the inevitable occurred.

According to witnesses and United Nations accounts, the massacre began when a van containing eight U.N. and Ethiopian government refugee camp officials was ambushed on a road connecting the towns of Itang and Gambella. All eight occupants of the van were killed.

At 1 p.m. that afternoon, Ethiopian soldiers brought the van and the corpses to Gambella, attracting crowds of angry onlookers. Here are three Anuak eyewitness accounts:

Obang: “The crowd of highlanders was angry about the killings [of the people in the van]. They asked ‘Who killed these people? Who killed these highlanders?’ All these people followed the van to the hospital. They are all angry. One soldier fired his gun in the air, and all the highlanders scattered and ran home. In a few minutes they came back carrying anything they could get from their homes – knives, guns, machetes, spears.”

Romeago: “They burned down my mom’s house and my sister’s house. My mom said about 400 Anuak were killed and they are still finding bodies in the bush and in the river. My other sister ran with her family into the bush; we haven’t heard from her. We don’t know if she and her kids are alive.”

Okun: “The soldiers knew who they were looking for. They went only to the houses of the Anuak, and then mainly for the educated ones, the students, the leaders. I talked to a cousin on my mom’s side. He hid under his bed to survive. He saw a soldier kill a boy in the street. They told the boy to run and then they shot him. He saw another boy who was shot in the leg but wasn’t killed; he was just lying in the street, calling for help. No one could go to him. The soldiers burned down houses and stole TVs, refrigerators and cash. All the houses with grass roofs, they burned.”

A spokesman with the Ethiopian embassy in Washington said eyewitness accounts of uniformed Ethiopian soldiers killing Anuak were “completely false and unfounded. The defense forces are doing their level best to look for those people who were involved in this sad event.”

When asked why 2,000 Anuak had fled Ethiopia as refugees, the spokesman said they had not fled ethnic cleansing. Rather, “they are enjoying the right of movement to live anywhere they like and to enjoy their own pursuit of life.”

A spokesman for the U.S. State Department, which has advised Americans not to travel to Gambella, said it had confirmed 113 dead and has sent a security team to the area to investigate the massacre.

In St. Paul, Minnesota, the Anuak tribe’s leadership in exile meets Saturday afternoons at an Ethiopian restaurant to plan relief efforts and a lobbying campaign to catch the attention of U.S. Sens. Mark Dayton (D-Minn.) and Norm Coleman (R-Minn.).

The Anuak held a rally December 20 on the steps of the state capital. More than 100 Anuak men and women marched in a circle carrying signs asking “Mr. Bush, Terrorism? Now Genocide?” and “Where is the International Body?”

An Anuak leader in St. Paul sent a New Year’s e-mail to a dozen Anuak friends in the United States, Australia and Canada. The e-mail had photographs of smiling Anuak boys and girls, and the message read:

“No one is going to stand up for us, so we must stand up for ourselves. We all need to come together and tell the whole world, and our enemies too, that the Anuak people have a right to live in this, God’s world. It is our birth place, just like the rest of the human species.”

Doug McGill is a writer in Rochester, Minnesota.