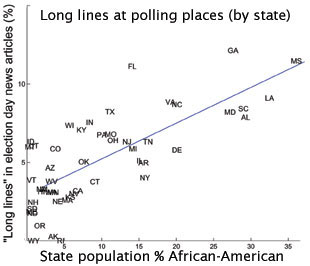 The number of Election Day news articles referring to long lines at polling places correlates strongly with African-American population. For a larger version of this graph and its sources, click here.

Long lines are not just a quadrennial problem: they leave lasting scars on the democratic process.

Did Rachel Maddow mean to suggest racism in naming long polling place lines as “the new poll tax”? After all, poll taxes were outlawed in 1964 by the 24th Amendment, which ended a mechanism of vote suppression dating back almost a century.

After the ratification of the 15th Amendment in 1870 (“The right of citizens of the United States to vote shall not be denied or abridged…on account of race, color, or previous condition of servitude.”) the South reacted with intimidation of black voters through violence. Within a few years poll taxes were enacted, very effectively disenfranchised the great majority of blacks, who could not come up with the cash that the tax required them to pay in order to vote.

Today, intentional vote suppression is illegal. So why would Maddow refer to long lines as a poll tax? Aren’t lines just a bureaucratic snafu, the inevitable consequence when voter turnout overruns predictions and an under-prepared county election apparatus struggles to cope?

Maybe not. Two generations after the Civil Rights Act, long lines at polling places show a striking correlation with the percentage of African-Americans in the voter population. States with a greater African-American population had more reports of long lines.

(Despite all the study and probing that elections and the electorate endure, there is no actual survey of polling place delays. In the graph, the figures for “long lines” are derived from a tally of Election Day news reports originating in each state that include that term.)

Long lines aren’t recognized for the corrosive effect that they have. News accounts on Election Day depicted willingness to wait in lines as a symbol of voters’ commitment. We heard of voters who waited six hours in Missouri, and of a woman in South Carolina who stayed in line while in labor.

What is visible becomes news, what is not visible goes unacknowledged. The many would-be voters who did not wait in line did not make it onto TV, because they weren’t around for the interview. Many had children or elders to care for, or jobs that wouldn’t allow them the time off. For others, it just wasn’t worth it. Because we don’t hear from these voters, they are identified by their absence: less committed, less civic-minded, less politically involved, and certainly of less interest to the politicians they don’t help to elect.

Long lines are not just a quadrennial problem: they leave lasting scars on the democratic process. The cost of voting encourages people to become habitual non-voters, to rationalize voting as too much trouble and ineffective, to not register for elections they won’t participate in, and to become cynical about the idea of elected representation. Whole communities, and minority communities in particular, gain reputations for low participation. This fact is duly noted by the political establishment, which attends to the needs of those communities accordingly.

Lines to vote are so standard in many places that we see them as inevitable, or avoidable only at considerable expense. It isn’t so. A nationwide mandated ratio of voting stations to voters would solve the problem. Some voting technologies use inexpensive voting stations, of which there can be as many as necessary, and require only one high-tech ballot scanner per polling place. These technologies are also the more trustworthy ones, as they retain a paper ballot marked by each voter.

Lines are not inevitable. What is inevitable, is that where there are lines, fewer people vote, not because they leave the line but because so many don’t get in the line in the first place. Where not as many people vote, one party benefits. If long lines occur mostly in urban or minority neighborhoods, the party that expects a majority of that demographic’s vote is the party that loses votes–and elections.

[Editor’s note: The original version of this article stated that the 1964 Civil Rights Act abolished poll taxes. In fact, the 24th Amendment, ratified in 1964, outlawed the use of poll taxes in federal elections. In These Times regrets the error.]

Michael Peshkin is an engineering professor at Northwestern University. He invites statistically oriented readers to consider the question of how much polling place lines affect election outcomes at votebackhome.com/longlines.