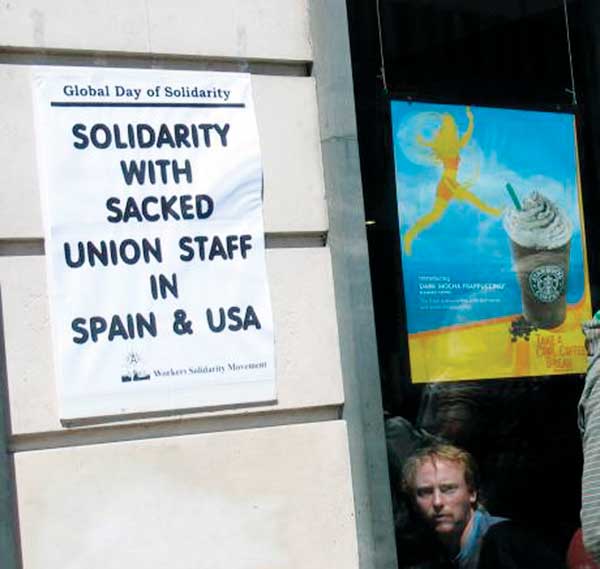 On July 5, baristas across the world protested Starbucks to show solidarity with fired union baristas in Seville, Spain, and Grand Rapids, Mich. This photo is from one such protest in Dublin, Ireland.

On Aug. 31, the light-rail train from Minneapolis to the Mall of America was boisterous. During the ride, several dozen Industrial Workers of the World (IWW) members – known as Wobblies – belted out the radical workers’ anthem “Solidarity Forever” in unison. The reason for their elation was because Erik Forman, 23, was returning to work as a Starbucks barista.

Forman, an IWW organizer, had been fired on July 10, his boss told him, for discussing with co-workers the disciplinary action that was taken against him after showing up late to work. But Forman believes the real reason was because of his outspoken advocacy for the Starbucks Workers Union (SWU) – which is part of the IWW – and says that his termination was an attempt by Starbucks, the world’s largest coffee-shop chain, to bust a growing union movement among its employees.

Forman filed a complaint for illegal termination and anti-union malfeasance with the National Labor Relations Board (NLRB) a week later. In support, Starbucks’ baristas throughout the Twin Cities signed a petition demanding Forman’s reinstatement. After a series of work stoppages and protests, Starbucks settled the complaint on Aug. 31.

Under the terms of the settlement, the company did not admit guilt or that the IWW’s actions influenced its decision to rehire Forman. But it did agree to reinstate him with back pay for missed time and to post signs in the shop for 60 days, informing workers that management would not interfere with attempts to organize.

More than half of Forman’s shop is now in the IWW – and at the Mall of America the Wobblies were planning “to drink some union-made lattes” in a sign of solidarity.

‘We are the union’

A handful of baristas started the SWU in a single Starbucks shop in New York City in May 2004.

“The union was sparked because workers had become fed up with low wages, unsecured scheduling, a prohibitive healthcare system and a lack of respect from managers,” says founding member Daniel Gross.

The SWU soon spread to Starbucks across the city, all while embracing the tenets of the IWW – particularly solidarity unionism. Unlike the prominent union model that uses a hierarchical power structure and focuses on bargaining with employers, solidarity unionism embraces direct democracy with members supporting one another directly.

Members of the SWU say Starbucks embarked on an anti-union campaign since the its inception. They allege management threatened employees who expressed interest in the union, and spied on and interrogated employees about union activity. SWU says the most outspoken union advocates were fired.

“Such allegations are baseless,” says Starbucks spokesperson Tara Darrow. “Starbucks strictly abides with laws and guidelines associated with labor law. We wouldn’t do that because it is against the law.”

Yet Starbucks’ settlement with the NLRB complaint on Forman’s behalf was the third such settlement in three years. During that time, Starbucks has reinstated four employees after they filed complaints with the NLRB, and two cases remain open.

In New York, Gross is still awaiting the decision of an August 2007 hearing in which the NLRB filed 30 complaints against Starbucks for anti-union malfeasance, in addition to a complaint that he, Gross, was fired illegally. More recently, in Grand Rapids, Mich., the NLRB filed a complaint against Starbucks, charging that the company illegally fired barista Cole Dorsey for union activity.

According to Dorsey, the SWU began organizing in Grand Rapids in 2006. But baristas who were interested in joining the union became concerned that repercussions might be taken against them for organizing publicly.

“We were attempting to organize a union election, a tactic we thought could be effective here in Michigan, but we believe management found out,” says Dorsey.

Those baristas collectively decided that Dorsey – at least initially – should be the union’s public face while others remained underground.

Dorsey was fired on June 6 during the union election campaign. Starbucks’ Darrow says Dorsey – who had worked at Starbucks for two years and had won employee awards – was fired for being tardy after receiving a final warning. As in other cases, Starbucks denies allegations of union-busting activity.

“The backbone of my case is that I was fired for less than what other employees have done,” Dorsey says.

In a response to Dorsey’s NLRB complaint, Starbucks’ attorneys reiterated the official reason he was fired, and added that he was a “salt,” suggesting that Dorsey had no interest in working at Starbucks and was there only to organize.

“I guess it is true in a sense because I am organizing people, but what they fail to understand is that I also depend on the income from my job, and they took that away from me,” Dorsey says. “We never wanted this to be a contentious issue. We want a union so that we can improve workplace conditions. Starbucks has made the situation contentious.”

In the past year, the SWU has grown more than it had in its first three years combined. The group says it has around 250 members nationally, with most congregated in Chicago, Grand Rapids, New York City and the Twin Cities.

SWU members say that the Twin Cities have the fastest growth rate nationwide, attributing much of the growth to the controversy stirred up by Forman’s firing.

Forman says the union’s local growth is only a step in a larger campaign to challenge Starbucks to improve worker conditions. With stores in 60 countries, Starbucks employs 150,000 people worldwide.

“The union needs to become international and it eventually needs to spread into all of the service industry,” Forman says.

A global movement against the corporation appears to be underway. Dorsey’s termination coincided with the firing of Monica (who wouldn’t reveal her last name because she fears being blacklisted by other employers), a Starbucks barista in Seville, Spain. Monica is a member of the Confederaci – n Nacional del Trabajo (CNT), the Spanish counterpart of the IWW.

Like Dorsey, Monica was also allegedly fired for union organizing. Their terminations sparked an international day of protest on July 5 at hundreds of Starbucks in cities across the world.

But, according to spokeswoman Darrow, Starbucks doesn’t fear such organizing.

“As far as we are concerned, our [employees] have free choice [to unionize] at all times,” she says. “We feel we have great communication back and forth with employees and we pride ourselves on providing a good workplace.”

Starbucks’ pride in its “good workplace” stems from the employee pay and benefit packages that the company often trumpets – benefits that include stock option programs and healthcare benefits that the company claims cover 65 percent of eligible employees. But the bottom line for the SWU is that a person simply cannot live a decent life as a Starbucks worker. The wages, which generally hover slightly above each state’s minimum wage, are too low; the hours are unstable; and health insurance premiums and deductibles are prohibitive compared to earnings.

While the most common response to such a situation is ‘Why don’t you quit?’ Forman says, “The fact is there are not many industries a person can get into with no skills, and retail is one of them. The best thing people can do is organize.”

Back at the Mall of America

The Wobblies’ Aug. 31 party on the light-rail was cut short two train stops before the Mall of America, when police officers boarded the train and questioned the group. Police told them the Mall of America is private property and that no demonstrations or protests are allowed there.

The union members explained that they were simply joining their friend for his first day of work and assured the officers they were not there to demonstrate or disrupt shoppers. The officers let them pass.

But when the train arrived at the Mall of America, a line of police in riot gear blocked the doors to the platform. Among them were FBI agents. (Aug. 31 was also the day before the opening of the Republican National Convention in St. Paul, which may have explained the police presence.) A co-worker text-messaged Forman that management had been speaking with police in their shop. No one was allowed off the train and police threatened to arrest anyone who tried to exit.

“It’s ridiculous,” Forman later says. “Management, the police and the FBI are working together. They say they didn’t want us demonstrating, but we assured them that was not our intent. I think it is clear, what they really fear is us organizing.”

Sam Stoker is a freelance reporter based in Chicago.